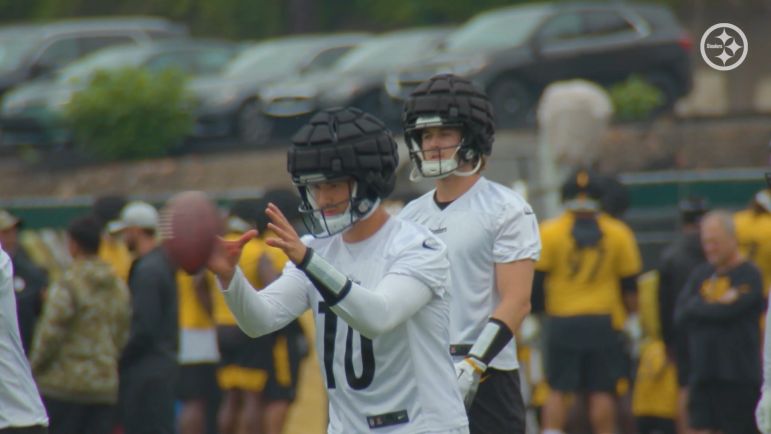 Prior to the start of the Pittsburgh Steelers’ first training camp practice at Saint Vincent College in Latrobe, PA, QB Mitch Trubisky took some time to answer questions from reporters and the local media.

When asked how he’s handling being in a competition for the starting QB job with Kenny Pickett but also mentor the rookie who is going through his first training camp in the NFL, Trubisky relates it all to being a great teammate rather than framing it as a self-centered competitor.

“I think it’s just being a great teammate every day,” said Trubisky via audio provided by 93.7 The Fan. “Having those conversations in the meeting room, in the locker room, or whenever we’re at practice. Helping him if he has any questions and just share my experiences with him. I mean, going into league Year Six, I have a lot of experience when it comes to training camp and when it comes to learning offenses. I’ve seen a lot of defenses. So, just having those conversations, it helps me as well, and we’re just all trying to push each other. When we do that, then we all get better.”

Mitch Trubisky understands what it’s like to enter the league and push the veteran QB for the starting job. He overtook Mike Glennon as the Bears’ starting QB as a rookie in 2017, becoming the full-time starter for Chicago the next two seasons before splitting time with Nick Foles in 2020 which would be his last season with the team. Trubisky would then go on to sign a one-year pact with the Buffalo Bills, where he wasn’t in position to push All-Pro Josh Allen for the starting job, making him the entrenched #2 option on the depth chart.

Trubisky now finds himself atop the depth chart for the Pittsburgh Steelers and appears to be the favorite to open the regular season as the team’s starting quarterback. Still, while Trubisky understands that he is in competition with Kenny Pickett and Mason Rudolph, he has been in Pickett’s shoes and looks to pay it forward by helping him adjust to the NFL game.

Being willing to learn and answer any questions can be useful for any player in the league, let alone at quarterback where you must have the entire offense down pact. Pickett has interested that he feels comfortable with the offense during OTAs and minicamp, but being able to talk to Trubisky about adjustments to opposing defenses can be a real benefit for Pickett as he prepares to face his first live NFL action this preseason.

Trubisky has the right mindset coming into training camp regarding his relationship with Kenny Pickett. He could come off as standoffish and refuse to help the rookie like other veteran QBs have done in the past, but he instead sees it as an opportunity for his own personal growth as a veteran as well as positive motivation to push one another to perform the best they can.

At the end of the day, the Pittsburgh Steelers need the best man for the job to start at QB 2022. Whether that is Trubisky, Pickett or Rudolph remains to be seen, but the team has set up an environment where all three options have a chance to prove themselves and seize the opportunity while supporting one another as teammates both on and off the field.