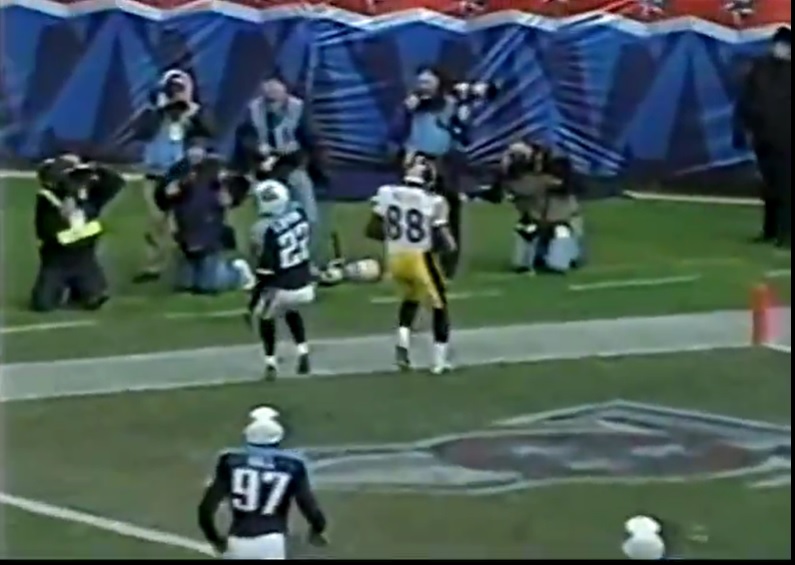 When it comes to Steelers’ receivers who actually logged offensive snaps, not guys simply carried through camp or practice squad lifers, it’s hard to find many more obscure than Terance Mathis. Not because he had a short career, he played 13 years in the league, but because he was drafted by the Jets and spent most of his days a Falcon, where most people remember him playing. Pittsburgh was his lost stop as he tried to hang on for just a little bit longer. Just like Franco Harris playing in Seattle or Mike Webster in Kansas City, it’s the sad swan song of a player’s career ending.

Signed in 2002 at the age of 35, Mathis was a backup but saw regular time on offense. Twice, he found the end zone. And both came in desperate but failed comeback bids. The first was Week 5 against the New Orleans Saints, a 14-yard slant from Tommy Maddox in the game’s final 90 seconds. A nice thread of the needle by Maddox.

With a successful two-point conversion to Hines Ward, Pittsburgh cut into the Saints’ lead 32-29. But Todd Peterson’s onside kick was unsuccessful and QB Aaron Brooks kneeled out the game.

The second came towards the end of the year as the Steelers’ furiously attempted to erase a 31-7 fourth quarter deficit. They got close and Mathis got them started, catching the ball near the end zone sideline on this stacked release between him and Antwaan Randle El.

Fullback Dan Kreider, of all people, hauled in the two-point try and two minutes later, Pittsburgh would make it a one-score game after Ward found the end zone and caught the two-point try. But the comeback would end there, the Steelers losing 31-23.

Evidently, when Mathis caught the ball, it came in catch-up mode. But he’s 2/2 in touchdowns and the Steelers are 2/2 in two-point conversions. He’d finish the year with fifth on the team in receptions (23), and yards (218) with those two touchdowns, the final pair of the 63 he’d snag over the course of his career.

He did make the postseason that year, a rarity for him (just five playoff games his previous 12 years) putting up identical lines in the Wild Card and Divisional Games, three catches for 40 yards on six targets. But neither of those combined six catches found their way into the end zone, even though Pittsburgh played catch-up in their win, the 36-33 thriller against the Browns (all three of Mathis’ catches that day came late in the fourth quarter so he really had a knack for looming large late).

Touchdowns in comebacks get remembered. It’s why you recall Chris Fuamatu-Ma’afala’s touchdown run in that game and not Mathis’ plays earlier in the season. Failed comeback scores are quickly forgotten, you might as well have been blown out. But they’re touchdowns all the same and worth remembering. After all, those were his final two.