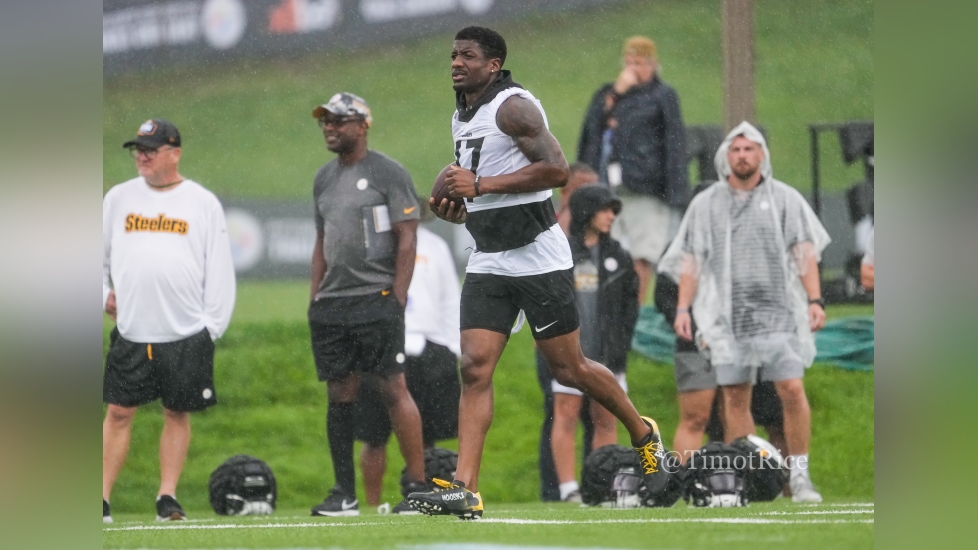 Adding a player the caliber of Anthony Miller last season at the wide receiver position was a rather solid get for the Pittsburgh Steelers, even if he never really saw much action at all throughout the 2021 season.

Despite having significant experience in the NFL and having the versatility to play in the slot or on the boundary, Miller didn’t quite get a shot with the Steelers in 2021, playing just 25 offensive snaps for the black and gold after signing on October 12, following a surprise release from the Houston Texans after an offseason trade from the Chicago Bears.

Spending nearly the entire 2021 season on the Steelers’ practice squad, Miller stayed relatively consistent without getting much of a look, sticking around long enough to earn an opportunity to grab a 53-man roster spot in training camp as the Steelers returned to Saint Vincent College in Latrobe for the first time since 2019.

Gonna be a huge opportunity today for guys like Anthony Miller, Cody White, and Calvin Austin III with Chase Claypool sitting out practice due to injury, and Diontae Johnson continuing his "hold-in."

Through four training camp practices on Chuck Noll Field in Latrobe, Miller has taken advantage of the opportunities given to him with Diontae Johnson conducting a “hold-in” and Chase Claypool dealing with a shoulder injury. Miller has received reps with the first-team offense early in camp, and has flashed great route running, strong hands and added the ability to return punts in the process, drawing some attention from the coaching staff, specifically head coach Mike Tomlin on Saturday.

Speaking with reporters following practice Saturday in Latrobe in front of crowd in which the Steelers distributed 17,000 digital tickets, Tomlin praised the veteran Miller, who is taking full advantage of the early training camp opportunities.

“You know, this is his first opportunity to be on the train when it leaves the station. Oftentimes we pick guys up and they get on a moving train during the course of the season and so forth,” Tomlin said to reporters Saturday, according to video via Steelers.com. “It’s good that he’s had the totality of the offseason, the learning process. I think being a component of the entire process is showing in a positive light for him.”

Mixing and matching but with no Diontae Johnson or Chase Claypool, three WRs on first rep of warmups had Cody White at the Z, Anthony Miller at the X, and George Pickens in the slot as the F. #Steelers

Having familiarity with the offense entering the second season under coordinator Matt Canada, while also spending plenty of time with Mitch Trubisky, Mason Rudolph and Kenny Pickett during OTAs and minicamp has helped Miller find his game in the black and gold, making him a serious threat to grab a 53-man roster spot early in training camp.

Bringing experience and versatility to the position is huge for Miller, who can play in the slot or on the boundary and can really stretch the field vertically when called upon. His special teams abilities help him as well in his push for a roster spot overall. He’ll have to continue to raise some eyebrows and continue to draw buzz in camp once the pads come on Monday and preseason games start, but so far Miller is off to a great start entering his second season with Pittsburgh.