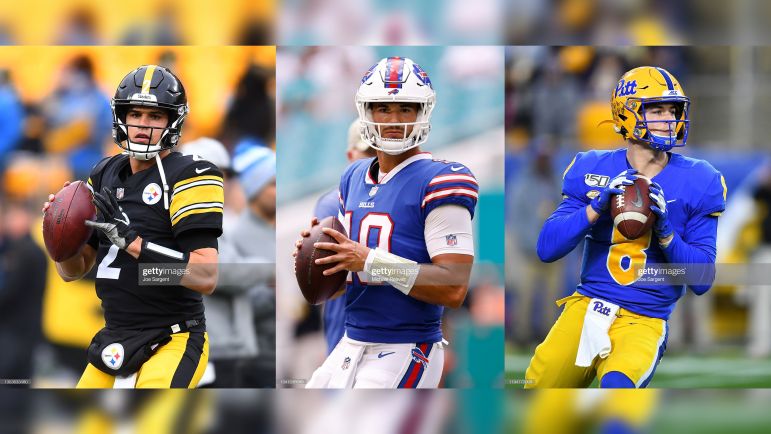 The start of training camp is less than a week away as players with report to Latrobe, PA on July 26, with the first official practice taking place the following day on July 27, officially kicking off the Pittsburgh Steelers’ 2022 season.

As the offseason has drug on, several superlatives and storylines have been created by the media and fans alike regarding every NFL team and specific players in the lead up for the upcoming season. The speculation has many chomping at the bit to just get real football underway, removing the uncertainties of “what could be” when players are placed under the bright lights once again.

Recently, NFL.com’s Nick Shook posted his training camp preview series highlighting the AFC North and three sub-plots fans need to pay attention as the preseason progresses. For the Pittsburgh Steelers, Shook led off with an obvious, yet crucial topic to the team’s success this season: the upcoming QB battle.

“The book is closed on the Ben Roethlisberger era, and despite spending a first-round pick on Kenny Pickett, the Steelers’ quarterback situation is far from set,” said Shook. “Mitchell Trubisky is in town to battle for the starting job, and Mason Rudolph is still around to serve as an experienced backup, if not more. This competition will dominate Steelers camp coverage this summer, and their 2022 fortunes depend upon its outcome.”

After Roethlisberger retired, Pittsburgh spared no expense combing through the possible avenues to find his potential heir. They signed Trubisky right as free agency began and heavily vetted every top QB prospect in this draft class, ultimately choosing the hometown kid Kenny Pickett in the first round. They also opted to draft Chris Oladokun in the seventh round to add another young arm to the room, rounding out the group with incumbent Mason Rudolph who the team re-signed last season in anticipation of Ben potentially retiring. The battle during training camp practices and in preseason action figures to be a fierce one between Trubisky, Pickett, and Rudolph with the winner expected to lead this team on a playoff push in 2022.

For Shook’s next subplot, he turned to another heavy topic of discussion this offseason: the state of the defense after a horrific 2021 season against the run.

“For the first time in what felt like a long time, the Steelers weren’t very good defensively in 2021,” said Shook. “Pittsburgh has reinforced its defense with the additions of players like Myles Jack, Levi Wallace and Larry Ogunjobi. Will those moves, plus Tomlin’s guidance, be enough to lift Pittsburgh out of the lower third of the league defensively?”

For reference, Pittsburgh ranked 20th in the league in total points allowed (398) and 24th in the league in total yards allowed (6,139), both numbers that far surpassed their yearly totals the past few seasons. While the team ranked inside the top ten in total passing yards allowed (3,656) last season, what really killed their defensive rankings was their historically bad run defense. Pittsburgh ranked dead last in total rushing yards allowed (2,483) and yards-per-carry (5.0). For a team that takes pride in their historically good defenses, those finishes are unacceptable.

The Steelers finished No. 32 in the NFL in run defense last season after allowing an average of 146.1 yards per game on the ground. #Steelers #NFL https://t.co/1spZBQhoou

With several players returning from injury along with the additions made via free agency, Pittsburgh figures to boast a unit closer to the top-half in the league rather than the cellar dweller they had last season.

For Shook’s final subplot, he addressed the issue of what the offense will look like now with Roethlisberger gone and what OC Matt Canada will do after an unspectacular debut as the play caller for the team last season.

“Year 1 of the Matt Canada era left plenty to be desired offensively, but Pittsburgh did scoop up a couple of intriguing receivers in the draft: Georgia’s George Pickens and Memphis’ Calvin Austin III,” Shook said. “The Steelers need to be better than the offense that fed Harris relentlessly and chucked it up with prayers to whoever appeared open downfield. Year 2 of Pat Freiermuth should be valuable to whoever’s under center, but this will be about more than just implementing an offensive system over one season. It’s a brand new day in Pittsburgh with Big Ben out of the picture.”

Canada certainly didn’t wow yinzers with his intuitive offense last season, but part of the lack of success could be put on how much Canada had to change his system to cater to an immobile Roethlisberger who was getting the ball out quickly nearly every snap. Another consideration for the lack of effectiveness on offense was the state of the offensive line last season, starting two rookies at center and left tackle, respectively and losing one of the better options in Kevin Dotson for over half the season. The additions of Mason Cole and James Daniels, along with the return of a healthy Dotson, should at least stabilize the OL from the erratic unit that took the field in 2021.

Matt Canada Admits Offense ‘Could’ Look Different: ‘We All Want The Results To Be Different’ – #Steelers #NFL https://t.co/yFwJTe0KbA pic.twitter.com/UIaQFsztfD

Along with the OL improvements, Pittsburgh did add youth and mobility to the QB position, something they haven’t had in some time. They also added speed to the receiver position, drafting Pickens and Austin as mentioned above as well as signed Miles Boykin to round out a deep WR room that also features Diontae Johnson and Chase Claypool. Everything will have to come together on the field in order for the offense to have success, but based on the names and talent added at much-needed spots, Pittsburgh will have the opportunity to represent themselves better offensively than they did for much of the 2022 campaign.