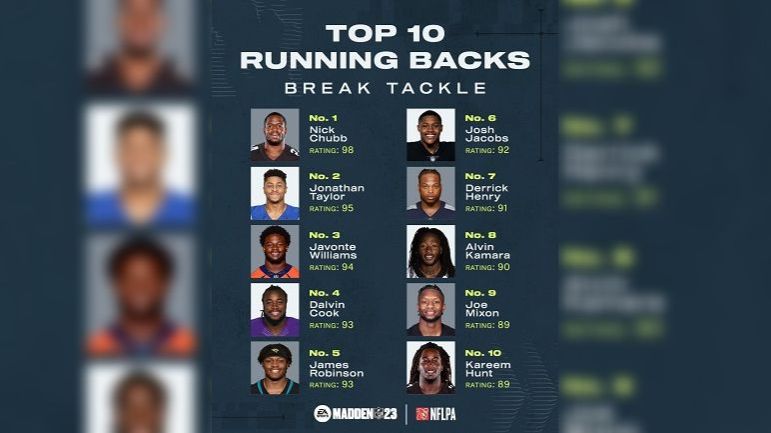 Madden is one of the most iconic video game franchises of all time, and perhaps the iconic sports video game franchise. Especially in this generation, you might be hard-pressed to find an NFL player who doesn’t at least occasionally play it, as the athletes today have grown up with video games likely being a part of their lives.

And so a lot of them do care, at least to some degree, about their virtual counterpart in the game. It doesn’t affect anything in the real world, of course, but it can be taken as a sign of respect, or lack thereof, based on how the company that produces the game reflects your performance through your avatar.

Pittsburgh Steelers running back Najee Harris is one of many NFL players today wondering what’s up with his own. The second-year player, who was a Pro Bowler as a rookie, did not even crack the top 10 at this position in terms of overall grade.

“I ain’t gonna lie, my guy. You know what, that stuff just came out today, and I got tagged in it—I don’t even want to discuss it, just off the fact that I’m actually kind of disappointed”, he told Rich Eisen just a short time ago. “I don’t want to talk about it, because just talking about it makes people want to say, ‘Oh, what is this rating?’ And they’ll be like, ‘Oh, man’. So, alright, listen, just play the game, kids. That’s all I got”.

A first-round draft pick out of Alabama for the Steelers last season, Harris rushed for 1200 yards and totaled 1667 yards from scrimmage, with 10 total touchdowns. He is expected to be the face of the team’s offense this season.

While he is not a homerun hitter, his elusiveness has been his bread and butter, with his ability to break tackles by either making people miss, jumping over them, or running through them. The Madden game’s lack of recognition of this aspect of his repertoire is what he took most issue with.

“You know what’s crazy, though? They didn’t even put me in the top 10 for breaking tackles. And I was like, ‘What, okay, hold on now. Let’s get something straight here. I broke a lot of god damn tackles last year’”, he said. “That’s the one thing I know I did. So for them to not even put me in the top 10, I was like, ‘Oh, man’. Well, it is what it is. Like I said, just play the game, kids”.

He rated sixth out of qualifying running backs in ‘elusive rating’, however, a formula designed by the outlet. In the game, he ranks 11th among running backs in ‘Break Tackle Rating’, even with a respectable score of 88. Nick Chubb has the highest rating at 98, followed by Jonathan Taylor at 95. Joe Mixon and Kareem Hunt tie for ninth at 89.