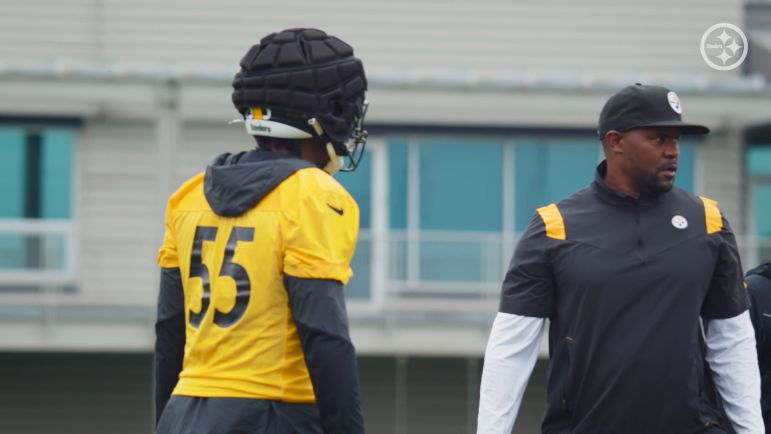 Football is an ever-evolving game, and that also applies to the technological aspects of it as well. It’s commonplace on an NFL sideline to see players on a tablet, or in Tom Brady’s case, sometimes throwing it. Another big change over the years is the way that coaches and players communicate, with certain players wearing the famous “green dot” helmet, giving that player microphone access to a coach while on the field. Before 2008, these were only given out to quarterbacks but starting that year, defenders got in on the action, usually by the middle linebacker, who’s most often seen as the heart and leader of a defense. Think the Ray Lewis, James Farrior-types.

There could be a potential showdown brewing at training camp in Latrobe, PA in a few short weeks to determine who will be wearing the green dot and be the “QB” of the team’s defense for the 2022 season. Will it be Devin Bush, the team’s first-round pick in 2019 who they famously made a draft-day trade up to acquire? Or will it be free-agent pickup Myles Jack, a tackling machine his first few years in the league while playing for Jacksonville. Speaking of Jacksonville, ex-Steeler Joe Schobert, also formerly of Jacksonville, was a late summer addition last year and was designated with wearing the dot, as Bush was still recovering from a torn ACL.

Upon his return, his play diagnosis and athletic ability looked affected, which is natural, especially from a mental standpoint, when recovering from such a serious knee injury. In fact, they generally say a player doesn’t usually look like his old self until a full year after, so here’s hoping Bush can regain his explosive form he showed as a rookie. The team also decided against picking up Bush’s fifth-year option, instead taking a wait-and-see approach.

On the flip side is Jack, a highly-athletic linebacker whose perhaps best attribute is being a sideline-to-sideline hitter, capable of racking up 100+ tackles with ease, just like he’s one in three of the past four seasons. Upon his release by the team earlier this offseason, he didn’t last long on the market as Mike Tomlin and the Steelers came clamoring for his services, inking him to a two-year deal. Still very young at just 26, Jack possesses vast upside. News 4 Jax Sports Anchor Jamal St. Cyr raved about Jack’s athleticism earlier this offseason after the acquisition. He also said he functions best when surrounded by elite talent, such was the case in his early Jags’ days playing with names like Calais Campbell, Telvin Smith, Yannick Ngakoue and Jalen Ramsey. However, I did find an interesting take by St. Cyr about Jack wearing the dot while in Jacksonville.

“All he really had to focus on was running sideline-to-sideline and making plays,” St. Cyr said via TribLive, noting the aforementioned talent around him early on allowed him to flourish. However, after those players left, the coaching staff wanted to pin him with a leadership role, and rightfully so. However, it didn’t yield the best results.

“He just doesn’t play well with that green dot,” St. Cyr said. “When he is in charge of lining up other guys, making that play call, his play tanks. As soon as you take that green dot away from him and say go out and do your responsibility, it’s like a light comes on.”

Listening to those comments, it seems like a no-brainer to just deal out the responsibility of wearing that dot to Bush. After all, he’s been in the system for several years longer than Jack, who’s coming from primarily playing in a 4-3 defense. He’s been on-record stating his injury was like being bitten by a dog, and it’s a big mental hurdle to overcome so hopefully being a year+ removed will help.

The defense as currently constructed, doesn’t feature any cover corners anywhere near the stratosphere of Ramsey, but it does possess an All-Pro at each level of it, including Cam Heyward up front, the reigning Defensive Player of the Year T.J. Watt, and fresh off a new extension, Minkah Fitzpatrick on the back end. So who will it be wearing the illustrious green dot for the 2022 Steelers D? Will it be Bush, whose draft pedigree suggested he’d become the next in a long line of Steelers’ linebacking greats. Or will it be Jack, the free-agent tackler extraordinaire? Let me know your thoughts in the comments below.