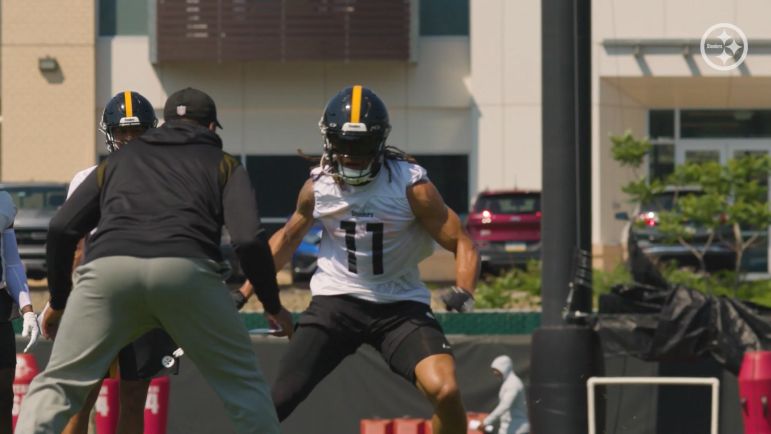 For the first time in three seasons, the Pittsburgh Steelers have a gaping hole at the slot wide receiver position.

The losses of JuJu Smith-Schuster and Ray-Ray McCloud significantly impacted the Steelers’ depth chart at the slot receiver position, which has been used heavily in recent seasons for the black and gold, from the changes at offensive coordinator with Todd Haley to Randy Fichtner, on to current offensive coordinator Matt Canada.

Though the losses of Smith-Schuster and McCloud certainly sting due to the talent and reliability the two brought, especially in 2021, the Steelers appear poised to at least transition quickly at the position with third-year receiver Chase Claypool likely sliding inside more in 2022, the additions of rookie draft picks George Pickens and Calvin Austin III, and veterans Anthony Miller and Steven Sims, who will fight for roles in training camp.

thread on chase claypool dominating in the slot pic.twitter.com/yL5OkMQeFI

The Steelers certainly have options, which matches up with the way the game has transitioned from a slot receiver standpoint. In the past, names like Brandon Stokley, Wes Welker, Julian Edelman, Hines Ward and more dominated the game from the slot. They were smaller receivers that all relied heavily on route running and toughness overall.

Things have changed at the position in recent seasons, where slot receivers have to be the total package to fully function in that role, while also being able to slide outside and provide valuable reps on the boundary as well.

Speaking to the media on Tuesday following the conditioning test at Saint Vincent College for the start of Steelers’ training camp, head coach Mike Tomlin highlighted the diverse skillset needed to function in the slot in today’s game, according to video via the Steelers’ official YouTube page.

“I think in today’s game, slot receiver play requires different skill sets, depending on what it is that you’re doing. Are you stretching the field vertically? It might require a certain skill set. You’re working underneath and against zone? It might require a certain skill set. You’re playing against man to man? It might require another skill set. I think that’s why increasingly so you see so many people in today’s game playing inside,” Tomlin said to reporters Tuesday, according to video via the Steelers’ official YouTube page. “Years ago, there was a designated slot guy, and that was the only guy that played in there. At the early stages of my career here, very rarely did you see anyone play in there besides Hines Ward, for example.

“In today’s game, based on schematics and matchups and so forth, you see people moving in and out of the slot position all the time. And so I just think that’s the nature of that discussion in today’s game, not only with us, but also the other 31 teams.”

The Steelers are certainly searching for an answer in the slot. Good news is, they have some answers to those questions Tomlin posed, with most of those answers coming in the form of Chase Claypool, who can stretch the field vertically, can work underneath against zone, and can handle man-to-man matchups with his route running while also serving as a strong run blocker inside.

Of course, Miller and Sims have had real NFL experience in the slot during their careers, while Pickens and Austin have played in the slot in college and provide more options for the Steelers.

How big of a role the slot receiver plays in the Steelers’ offense post-Ben Roethlisberger remains to be seen. Regardless of overall usage or need, the Steelers have the answers to the questions posed by their head coach Tuesday, fitting what the league likes to do in today’s NFL overall.