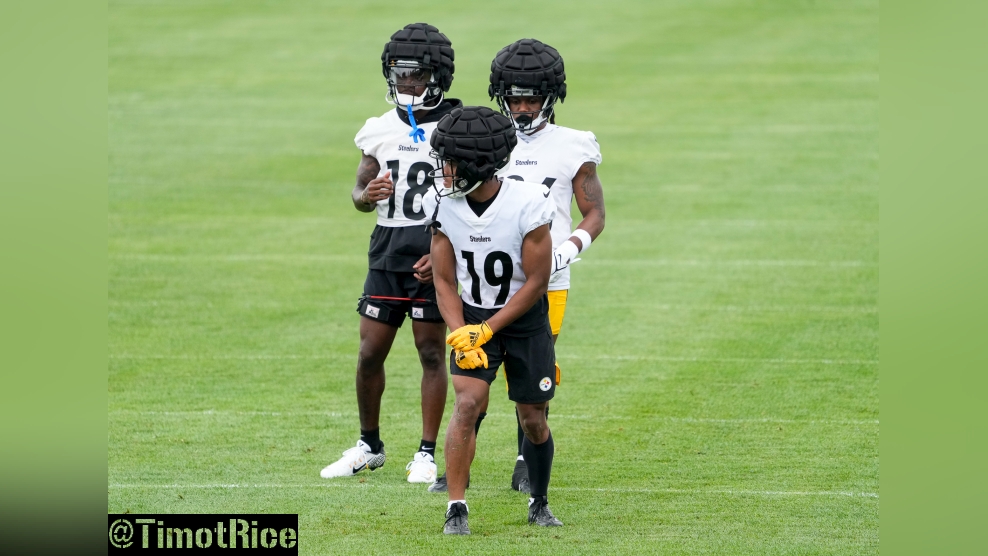 When the Pittsburgh Steelers made the selections of wide receivers George Pickens and Calvin Austin III in the second and fourth rounds of the 2022 NFL Draft, then-GM Kevin Colbert was hoping to give a depleted wide receiver room a significant boost from a playmaking perspective.

Three days into training camp at Saint Vincent College in Latrobe, the two young rookies have more than lived up to the billing, turning heads often on Chuck Noll Field.

Pickens, who could have been the top reciever in the draft class in April if not for a torn ACL suffered during the spring of 2021, has shown off his impressive traits overall, twisting and turning in the air to make acrobatic catches, while also showing off his strength to rip the football away from defenders for tough catches in traffic.

Austin, who clocked the fastest time of any receiver at the 2022 NFL Scouting Combine at Lucas Oil Stadium in Indianapolis, has shown off his track speed time and time again with the football in his hands, ripping off chunk plays left and right as soon as he touches the football.

For new Steelers quarterback Mitch Trubisky, who spoke to reporters prior to practice Saturday, according to video via Steelers.com, he’s able to see just how special the two rookie receivers are. Moving forward, it’s all about getting the two new weapons fully acclimated to the playbook from different positions on the field, allowing them to have roles in the offense so that the Steelers can get them the football and let them do special things with the ball in their hands this fall.

“Calvin’s fast, man. Any way we can get the ball in his hands in open space, it’s gonna be deadly,” Trubisky said to reporters, according to video via Steelers.com. “So, Calvin and George are kind in the same boat, just picking up this NFL offense. A lot of verbiage, a lot of terminology, and we’re putting them in all different kinds of spots. So it’s a lot of learning for them, but once they get it down, you get the ball in their hands, they can do special things with it.”

That’s exactly what the two were drafted to do, although in different forms.

With a track background at Memphis, Austin brings the ability to take a short dump-off and turn it into an explosive play. That’s something the Steelers were missing the last few years, that catch-short, run-long ability. So far in camp, Austin has shown he could be the answer to that. He’s much more than that as a receiver though, having played a ton of snaps at the X in college at Memphis, utilizing his quick-twitch abilities in and out of cuts to create ample separation and win in routes.

As for Pickens, he was eyed as that home run threat that can stretch defenses vertically while still being able to handle a possession receiver style role. He’s a strong route runner for a receiver of his size, and he has great hands overall, rarely recording drops in college. That will endear him to whomever the next Steelers’ quarterback is in 2022.

Not only are the rookie wide receivers catching the eyes of Trubisky, they’re also catching the attention of fourth-year tight end Zach Gentry. Speaking with reporters prior to Saturday’s practice in Latrobe, Gentry praised the two young receivers, who are consistently making plays early in training camp.

“They’re playing confident…they’re gonna have some mental errors here and there like we all are,” Gentry said to reporters, according to video via Steelers.com. “They’re fresh, they’re brand new, but they have really high confidence levels. They’re physical, they all bring a little something different to the table.

“George is big and strong; I saw him pluck the ball on sidelines yesterday, and Calvin’s flying through on his jet sweeps and making some hard catches. So, they’ve impressed so far for sure.”

So far, the return on investment has been very positive with Pickens and Austin. Let’s see if they can keep it up once the pads come on and the games start.