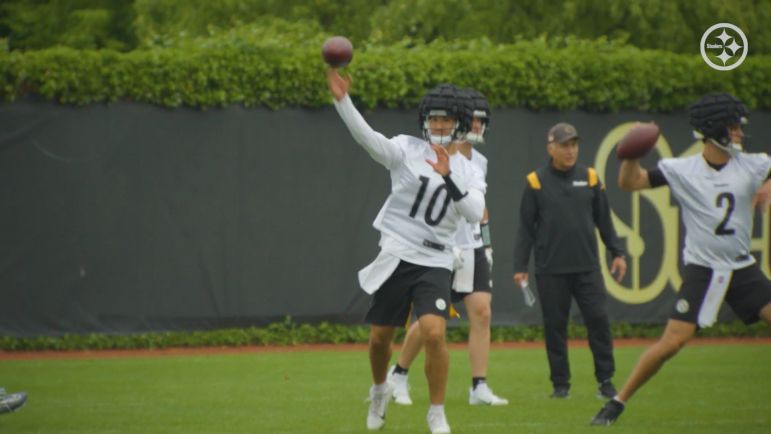 If you’re looking to use the Pittsburgh Steelers in Madden 23, you might have a tough time throwing the ball. Mitch Trubisky nor Kenny Pickett came in very highly with their Madden ratings this year. Trubisky edged out Pickett but only barley, a 69 overall compared to Pickett’s 68. Here’s how the QB room looks.

Notable stats for Trubisky include 84 speed and 88 throw power compared to Pickett’s 81 speed and 86 throw power, giving him one of the game’s weaker arms. Pickett beats Trubisky out with a 84 short accuracy and 79 middle accuracy compared to Trubisky with 83 and 77 respective accuracy. Trubisky’s deep ball is rated slightly more accurate in the game, 78 to 77.

Despite being the first QB drafted by a wide margin, Pickett is the third-highest rated rookie QB in the game behind Atlanta’s Desmond Ridder (70 Overall) and Tennessee’s Malik Willis (69 Overall).

Tom Brady is the game’s top-rated QB at 97 overall with Aaron Rodgers right behind at 96. Here’s the top ten.

The best of the best QBs in #Madden23 👀 @EAMaddenNFL

How'd they do? ⤵️ pic.twitter.com/14oElQVHYn

Two of the top ten come from the AFC North in Joe Burrow and Lamar Jackson. Deshaun Watson is an 84 overall in the game, putting the Steelers at a real disadvantage for your franchise mode.

Madden also revealed the offensive line ratings today. Here are the Steelers’ most notable ones.

Not exactly the best offensive line in the game. It’s interesting to see Green rated as the second-highest player, tied with Dotson, after a tough rookie year, but Green shines with his in-game athleticism and strength. Green has the line’s best acceleration at 81 overall. Here’s the top lineman in each key category.

You want them upfront 👊

Mercifully, that will conclude the release of the Madden 23 ratings. Here’s the Steelers’ top five overall players.

Offensive tackle Chaz Green is the worst-rated player at a lowly 53 overall.

The Steelers have an 80 overall team rating though their defense is rated 87 overall, one of the best in the game.