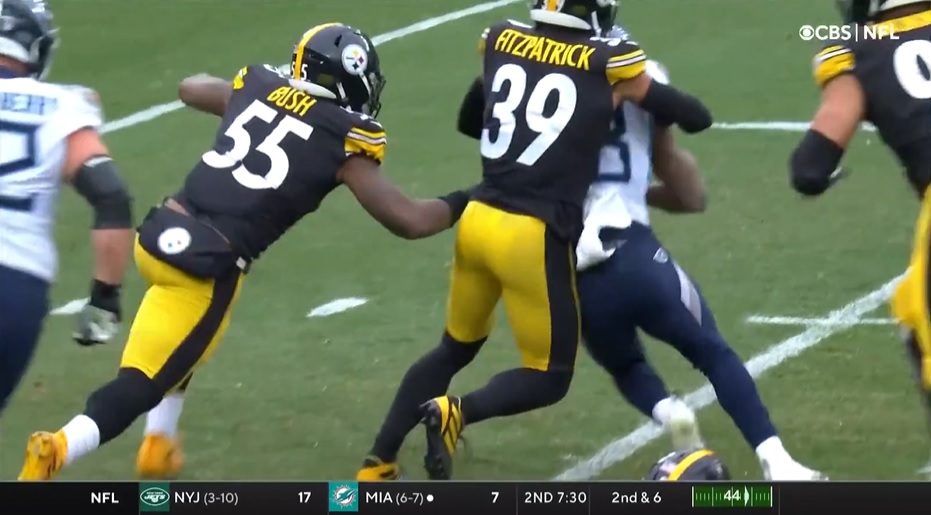 By the end of last season, no one’s body was as beat up as Minkah Fitzpatrick’s. That’s what happens after you record 124 total tackles, the most ever by a Steelers’ safety. Fitzpatrick wasn’t just the last line of defense in the passing game, keeping everything in front of him, he was too often the last obstacle in the run game, making tackle after tackle far downfield.

If the Pittsburgh Steelers want to improve their odds of making to the playoffs and actually winning a game, Fitzpatrick knows that story has to be rewritten. He said as much after reporting to camp on Tuesday.

“We need to solidify ourselves against the run,” Fitzpatrick via Steelers.com Teresa Varley’s camp blog. “Not allowing big plays. Those things last year hurt us. In the secondary we gave up big plays we normally don’t. Winning 50/50 balls more often. And solidify against the run.”

It’s become a bit tired to say but the Steelers’ run defense was terrible a year ago. Last in the league, worst in team history. And no one cleaned up more messes than Fitzpatrick, who led the league in tackles of runs 10+ yards. He finished last year with 71 of them, far more than second place.

Fitzpatrick had 41 more tackles than the second closest Steeler (Edmunds, 30). Cleaned up a lot of messes this year. #Steelers

It’s perhaps one reason why Fitzpatrick finished the year with just two interceptions, the fewest he’s recorded since his rookie year in Miami. Granted, he made other plays on the football, including breakups and tipped passes that resulted in interceptions (he also had a gimmie INT dropped against Green Bay) but dedicating so much of his time and energy on the run isn’t what he needs to do in order for this defense to function at a high level. You can pretty much predict the Steelers’ run defense success or failure based off Fitzpatrick’s tackles this year. If he has 79 like he did in 2020, the run defense got better. If he’s up over 100 again, it’ll have been another long season.

As he also pointed out, the Steelers’ defense gave up too many big plays last year through the air. Though the final numbers look decent, it was an issue that plagued the team early on in the season. Blowing a coverage in a loss to the Raiders, getting torched by the Bengals’ Ja’Marr Chase and Tee Higgins in both losses to Cincinnati. Pittsburgh has an arguably more talented and experienced secondary with more continuity than a year ago which should help eliminate some of the coverage busts. It’ll also allow Fitzpatrick to play his true FS role as opposed to last year, when he spent the first two weeks aligned in the slot.

The Steelers have the task of trying to slow down high-powered offenses like the Bengals, Buccaneers, and Ravens along with the Browns, assuming they face Deshaun Watson at least once this year. They’ll succeed by winning low-scoring contests, ones that look like 17-13 instead of shootouts that go 35-31. Improving the run defense to at least top ten will go a long way in accomplishing that. It’ll also mean fewer trips to the cold tub for Minkah Fitzpatrick.