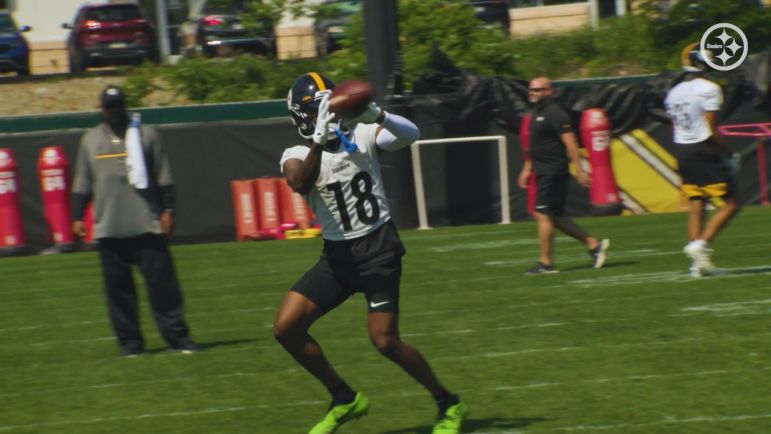 With Diontae Johnson entering the last year of his contract, Steelers’ Head Coach Mike Tomlin didn’t seem to have any concerns about his participation during training camp. Tomlin also confirmed that Johnson reported to camp.

“I’m not proceeding with any anticipation of those types of things,” Tomlin said in his press conference today about Johnson sitting out during camp. “He did a heck of a job during the conditioning test, like everyone else.” Tomlin also touched on Johnson’s leadership.

When asked if sees Johnson as a leader, he responded “I do, and not for the first time. I thought he exhibited growth in that area significantly a year ago.”

Johnson participating fully in training camp would be a welcome sign for Pittsburgh. With a lot of turnover at the wide receiver position with both JuJu Smith-Schuster and Ray-Ray McCloud leaving in free agency and rookies George Pickens and Calvin Austin III joining the receiver room, as well as free agent pickup Miles Boykin joining, having Johnson participate to build cohesion is important. As the most experienced receiver on the team, his leadership and mentorship will be important in getting the new guys up to speed.

As far as his contract situation goes, it’s promising that Johnson seems willing to not let it be a point of contention if he in fact does participate in drills with the team. While it’s up for debate whether Johnson deserves a top-of-the-line receiver salary, the fact he isn’t holding the fact he doesn’t have a new extension yet against the team by holding out or holding in is a good sign. It wouldn’t be surprising to see a deal get done before Week 1, but if it doesn’t, Steelers fans likely won’t have to worry about Johnson taking the field or not, especially if he’s a full participant in camp.

Tomlin touching on Johnson being a leader is important, as while the receivers are obviously young, the Steelers’ offense as a whole is, too. It’s a group that’s going to need leadership, as coupled with the youth, there’s a lot of turnover, namely at the quarterback spot. If Johnson can tap into that leadership and be a guy this young group can look up to, that will be huge for Pittsburgh as they enter a new era in 2022.

I’m interested to see the numbers Johnson puts up with a new quarterback under center. You can argue whether or not Mitch Trubisky, Kenny Pickett or Mason Rudolph will truly be better than Ben Roethlisberger was in 2021, but I think that whoever starts at quarterback Week 1 will have more arm strength than Ben showed in 2021.

Johnson has the ability to be a deep threat, and paired with another deep weapon in either Claypool or Austin III, seeing him make plays down the field would be a welcome sight. He surpassed both the 100 reception and 1,000-yard mark last season, and if he could do so again and improve from his performance last year, that would obviously be a very good sign for Pittsburgh.