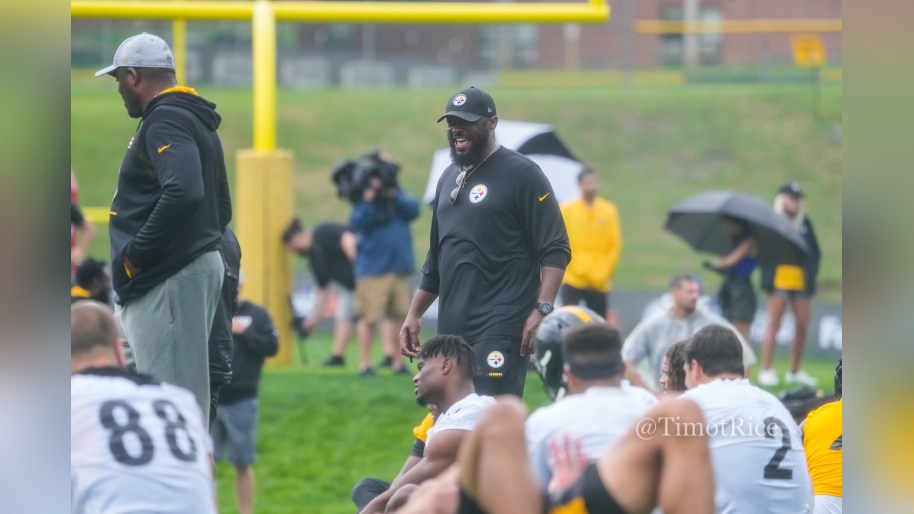 The Pittsburgh Steelers had a rather damp training camp practice yesterday out at Saint Vincent College. It was perhaps the heaviest downpour Chuck Noll Field has seen with Alex Kozora in attendance, he suggested. Yet they got in “every snap” they wanted to, nevertheless, according to head coach Mike Tomlin. And he was thankful, both for that and for the rain.

“I love the uncertainty of the weather”, he told reporters, via the team’s website. “It forces us to be light on our feet and adaptable. It challenges [the players] from a mindset standpoint. It’s just opportunities to teach and to learn, and for guys to display their football character and enthusiasm and passion for the game in spite of whatever adversity the elements of the game may present”.

Now, anybody who has made it to the NFL has surely played in rain before. You will have had to have played a lot of football in order to find your way onto an NFL roster, barring the very rare example, like a crossover athlete from basketball.

So playing in the rain, practicing in the rain, this isn’t something that any of these guys haven’t done before. But it is a test every time the opportunity presents itself. The day was a sloppy one, but it still provided good observations for Tomlin and his coaching staff so early in training camp.

“When the weather is less than ideal, it’s a great opportunity for defenders to ball search”, Tomlin said. “It’s a great opportunity for offensive guys to focus on ball security and making routine-like plays routinely. There’s some coaching points and some things to look at tonight based on what transpired, but all in all, days like today are good, because they provide that platform to grow”.

They are, at least, when you are able to get done everything you set out to do. Today, they were able to get their work in. Next time, they might have to alter their plans, which while inevitable, is certainly not preferable, even if it allows you to test your adaptability.

Of course, it’s better to have worked in the rain now if you’re going to have to do it in November. Any kind of experience helps, especially for younger players, rookies who are adjusting to a different-sized ball, for example.

Still, it’s hard to imagine anything football brings on the field that Tomlin doesn’t enjoy. He’s a kid in a candy store when helmets are involved. He let out a Ric Flair ‘Woo’ as he headed down to the field yesterday before practice, ready for the day’s affairs.

And today is another day. It should be a good one overall, perhaps a bit humid with a passing shower, but any day you learn something about your football team is one that was worthwhile in pursuit of the goal of winning a championship.