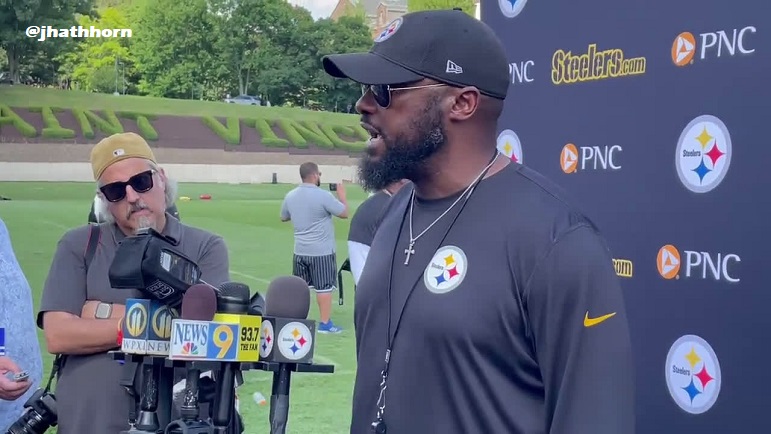 Former Pittsburgh Steelers tight end Heath Miller was inducted into the team’s Hall of Honor today after a career that spanned 11 seasons in Pittsburgh and saw him haul in 592 receptions for 6,569 yards and 45 touchdowns. Mike Tomlin was asked today about his favorite recollection of Miller in a Steelers uniform.

“I just love the fact that Heath worked in silence. You know, you talk about a man of few words, man, Heath was a man of no words, but, man, you felt the intensity in his demeanor and in his play. And I just think it’s a unique thing when a quiet guy still is able to display intensity and you feel it in his presence,” Tomlin said, via a tweet from Jeff Hathhorn.

Miller and Tomlin overlapped for nine years in Pittsburgh, so Tomlin would know better than almost anyone how Miller approached the game. He was the ultimate competitor, and when he was healthy, he was one of Ben Roethlisberger’s favorite targets and definitely his most reliable throughout the years. For a team to spend a first-round pick on a tight end as Pittsburgh did on Miller, they have to be a special player, and I think it’s fair to say that Miller was. While he never had over 1,000 yards, he never had to be that sort of player. He had to get open and help the Steelers move the chains and be a safety for Roethlisberger. Miller had over 60 receptions in a season four times and five seasons with five or more touchdowns.

His quiet intensity made him a fan favorite throughout his career in Pittsburgh, and it’s one of the reasons why he’s a Hall of Honor inductee. Team owner Art Rooney II also praised Miller today during the ceremony that took place today in Latrobe.

“Heath [Miller] was a model citizen if you will. A team player, unselfish, did whatever needed to be done to keep having success. His work ethic was fantastic. Just a model professional football player,” Rooney said.

While he wasn’t a guy who led with his words, he always let his play do the talking. As Rooney said, Miller was the ultimate team player and led and inspired his teammates by how he approached his job. In games, in practice, or in the weight room, Miller was a guy who just led by example. Players didn’t need to hear from him to know what to do, because they would see it every day by how he went about his business. While he won’t be a Pro Football Hall of Famer, Miller was an all-time great Steeler, and I’m glad he’s a member of their Hall of Honor.

There will never be another Heath Miller, but Pittsburgh has a good future at tight end with Pat Freiermuth, Zach Gentry and Connor Heyward. Freiermuth could end up being just as good, if not better as a receiving tight end, and there was a nice moment between the two today after Miller was announced as an inductee.

Miller is more than deserving of this honor, and it’s good to see him recognized by his former coach and ownership.