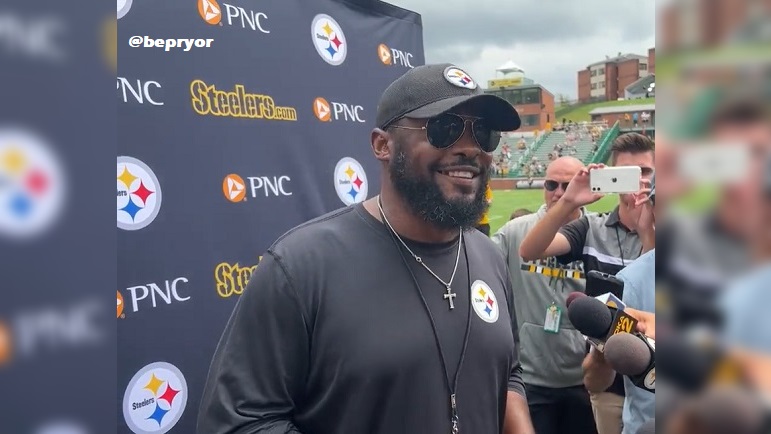 While Diontae Johnson isn’t a full participant in drills during training camp, the Pittsburgh Steelers aren’t looking at it with a sense of worry. During his press conference after practice today, Head Coach Mike Tomlin said in his press conference today that he’s taking the perspective that it helps the younger receivers get increased reps.

“I’ve just learned over the course of time to look at it from the perspective of those that get increased rep opportunities. And boy, we got some young guys at that position that, you know, gonna take advantage of some of those opportunities and hopefully for the good,” Tomlin said.

At this point, the Steelers know what Johnson is capable of. While him fully participating is good from a leadership standpoint and helping him fully get ready for the season, as we saw with T.J. Watt last year, him being a “hold-in” doesn’t mean he’ll need to miss time during the regular season to get up to speed. Having guys like Calvin Austin III and George Pickens get increased reps, as well as guys like Miles Boykin, Cody White and even Tyler Snead will be helpful for Pittsburgh.

It gives guys like Boykin and Snead a good opportunity to crack the roster, or in Snead’s case, the practice squad, and helps Pittsburgh see how ready Pickens and Austin III will be to step into a role immediately once the regular season is underway. Tomlin taking the approach that getting those guys extra reps isn’t a huge surprise, but regardless, it’s going to be interesting to watch it play out.

Johnson sitting out isn’t a good thing for Pittsburgh, but it’s also not really all that bad. It worked out just fine with Watt last year, and getting the younger receivers extra reps is helpful. While I’m sure the Steelers would be happier if Johnson was a full participant, the process will play itself out the same way it has in the past with Watt or Minkah Fitzpatrick during OTAs. Johnson is making the best decision for himself, and the Steelers will be able to become the best version of themselves by getting a better evaluation on the rest of the wide receiver room.

Whether or not you’re a fan of the Steelers extending Johnson, if they do, it’ll likely happen within the next month. The sooner an extension gets done, if it gets done, the earlier Johnson will be a full participant for the Steelers in camp. Until then, get ready to watch Pickens, Austin II and the rest of the young wideout group try to establish themselves and prove they deserve a role.