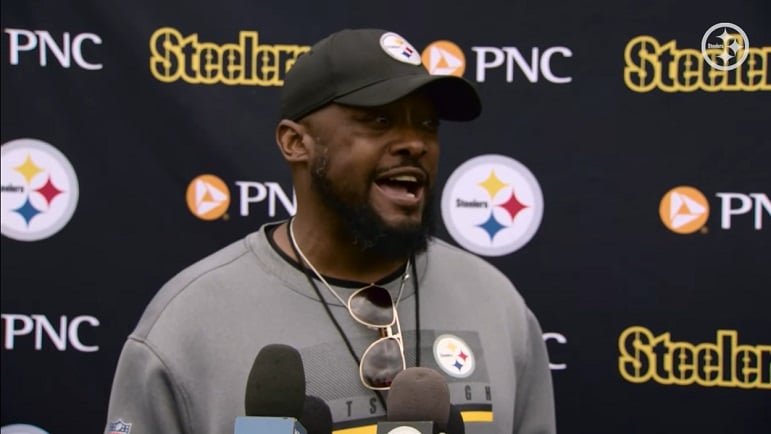 Following the annual conditioning test at Saint Vincent College in Latrobe, PA to kick off Steelers training camp for the 2022 season, head coach Mike Tomlin took the stand for a press conference where he addressed a few details concerning team injuries and how the team showed up to Latrobe in shape overall.

When asked by a member of the media about new running back Jeremy McNichols who was just signed today and what his role might be for the offense, Tomlin was candid in his response regarding the newest member of the Pittsburgh Steelers.

LIVE: Coach Tomlin addresses the media prior to our first #SteelersCamp practice. https://t.co/ghuXt7jCIK

“We’ll see,” Tomlin responded to the question of how McNichols fits in the running back room via video provided by the team’s website. “He is a guy that has an NFL resume. We have been in stadiums with him in the past. We know that he is capable. You know, he and others will be given an opportunity to define their roles and divide the labor up as we get into it, but we are happy that he is with us.”

Jeremy McNichols finds himself with the Pittsburgh Steelers after spending the last two seasons with the Tennessee Titans where he served primarily as a third-down back that did his best work as a receiver in the passing game. Last season, McNichols had 28 receptions for 240 yards and a TD to go along with 41 carries for 156 yards. The former fifth-round pick out of Boise State has jumped around the league to start his career, struggling with consistent vision as a runner and pass protection as a blocker, but has been serviceable when called upon as a satellite/change-of-pace back.

Tomlin doesn’t hide the fact that McNichols will be splitting the load with the other options on the depth chart behind entrenched starter Najee Harris as the team finds out which players can best complement their workhorse back this season. While he has his warts like the other options behind Harris on the depth chart, McNichols’ passing game prowess could give him the advantage needed to win the RB3 spot and make the regular season roster as a passing downs option to give Harris a breather when needed.