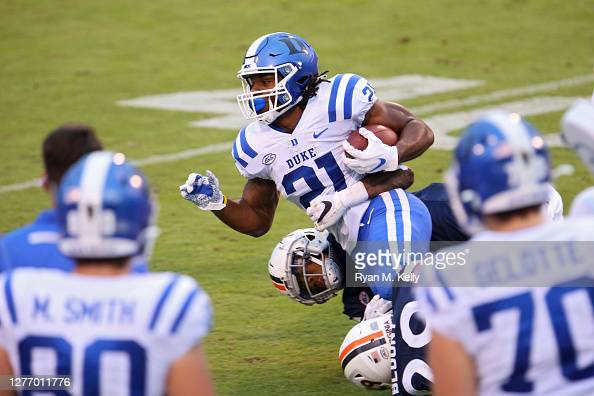 Following the conclusion of the 2022 NFL Draft, it was a bit surprising to see outgoing Pittsburgh Steelers’ GM Kevin Colbert pass on addressing the backup running back position behind star second-year pro Najee Harris.

Though the Steelers didn’t spend a draft pick on a running back that would slot in as the No. 2 behind Harris, Colbert, new GM Omar Khan and the Steelers moved swiftly to lock up undrafted free agents Mataeo Durant of Duke and Jaylen Warren of Oklahoma State, giving the Steelers two intriguing young running backs to work with ahead of the 2022 season.

That might not be entirely settling or comforting knowing that the potential backup running back behind Harris could be an undrafted free agent or two, but it’s not like the Steelers landed two guys with a lack of talent. Durant was a 2021 First Team All-ACC selection at running back and finished his career with 2,562 rushing yards and 18 touchdowns on 489 career carries. He also added 55 catches for 488 yards and four touchdowns in his career with the Blue Devils.

Another TD run by Mataeo Durant from 2021 #Steelers #NFL pic.twitter.com/DmXMBJEMB7

Warren was a one-year wonder for the Cowboys, emerging from the bottom of the depth chart to develop into a team captain and the Big 12 newcomer of the year award winner, leading Oklahoma State to the Big 12 title game and a win over Notre Dame in the Fiesta Bowl.

Landing in Pittsburgh, both have a good shot at cracking the 53-man roster at running back, as names like Benny Snell Jr., Anthony McFarland and Trey Edmunds are vying for the No. 2 and No. 3 jobs in Pittsburgh. That’s not exactly a loaded depth chart, as Snell Jr. has underwhelmed at times and McFarland simply can’t get on the field consistently.

That’s where Durant sees an opportunity with the black and gold. Speaking with the Pittsburgh Tribune-Review’s Chris Adamski during minicamp in mid-June, Durant stated his belief in himself to be a real asset for the Steelers, aiming to make the most of his opportunity as a UDFA in an offensive scheme that will look to run the football a lot in 2022 and beyond.

MATAEO DURANT DOES IT AGAIN 💨

“I just know myself as a player, I could be an asset, be it special teams or offense or anything they need me to do,” Durant said to Adamski, according to original reporting from the Tribune-Review. “When you’re in this position, you just have to make the most of your opportunity, do everything you can to show that you can be an asset.”

Durant, at 6-foot-1, 195 pounds, certainly has the skillset and the overall build to be an asset for the Steelers. Durant brings special teams experience to the table as a kick returner and coverage unit player during his time at Duke, and can play all three downs offensively in a pinch as a between-the-tackles runner with the ability to catch the football out of the backfield.

It’s a tough road ahead for the UDFA to make the roster, but there’s certainly a real opportunity in front of him in the Steel City, whether that’s landing on the 53-man roster or earning a spot on the practice squad. He’s going to have to step up and do whatever is asked of him by the coaching staff throughout training camp and the preseason to make a mark.

Based on his work ethic and willingness to do whatever it takes in college, he’ll be the same type of player in the NFL, one that could work his way into the backup role in Pittsburgh behind Harris.