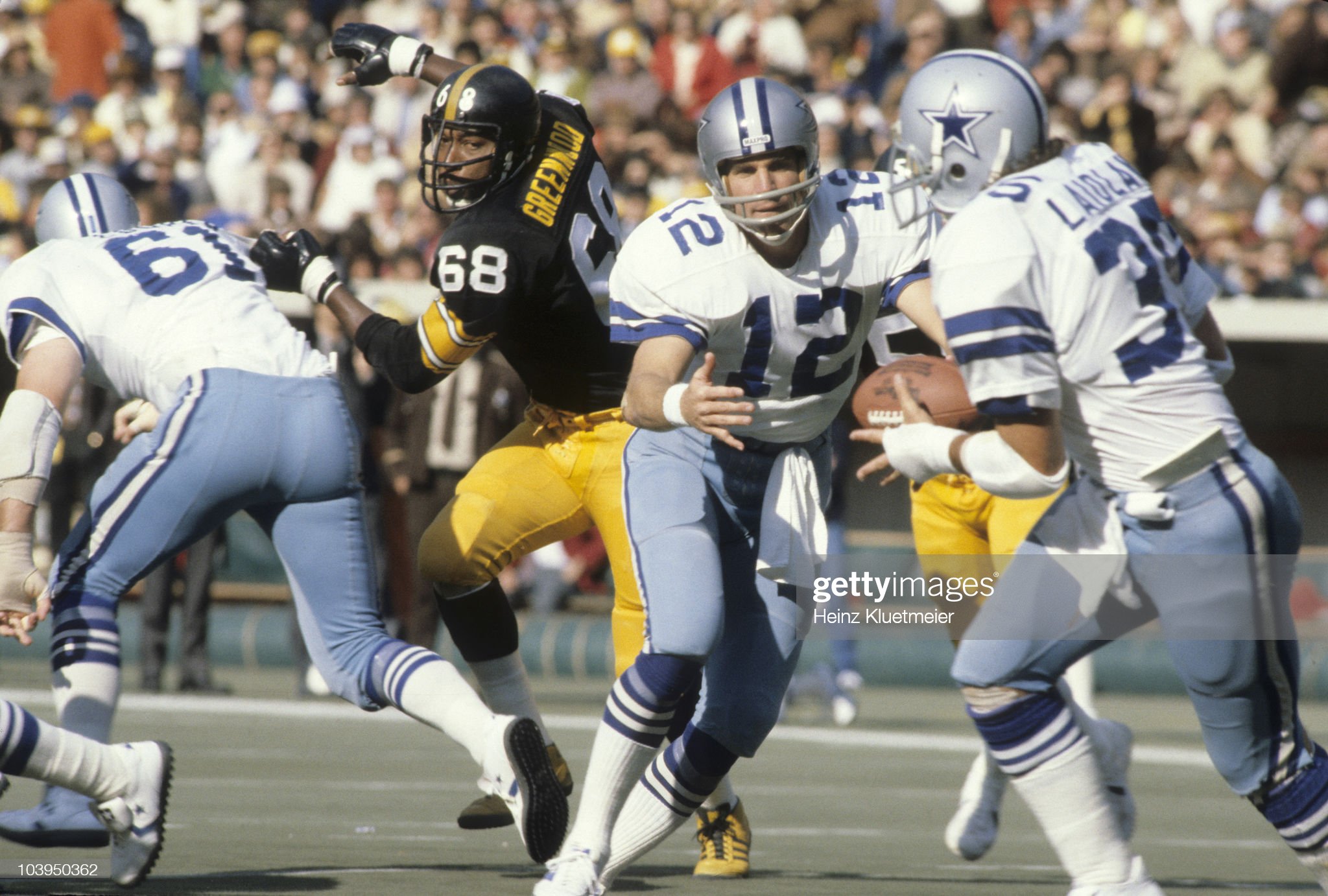 The 1970s dynasty for the Pittsburgh Steelers was one of the greatest runs in NFL history, both on the field and off.

Coming out of that reign over the NFL, which saw four Super Bowl championships, the Steelers saw a total of 13 players, coaches and front office personnel enter the hallowed halls of the Pro Football Hall of Fame. That’s more than half of the 25 total Steelers inducted into Canton.

Still, all these years later, there’s one name that is left out of that group of 13 in Canton, one that certainly deserves his rightful place alongside his teammates, coaches and front office personnel.

Knowing the history of the famed Steel Curtain defense in the Steel City, and the number of greats that were part of that dynasty, I found myself down a rabbit hole on Pro-Football-Reference and its Hall of Fame Monitor page, looking at a number of statistics while trying to make the case for a handful of Steelers players that I believe deserve a spot in the Hall of Fame.

One player from that incredible era still doesn’t get the respect he deserves nationally, based on the numbers.

None other than L.C. Henderson Greenwood.

Got to start making a harder push to get L.C. Greenwood into the @ProFootballHOF. It's been long enough. #Steelers #NFL pic.twitter.com/lo0fOYBGoz

A 10th round pick out of Arkansas-Pine Bluff in the 1969 NFL Draft, Greenwood went on to play 13 seasons in the black and gold, retiring in 1981 after winning four Super Bowls as a key component in the famed Steel Curtain defense under Hall of Fame head coach Chuck Noll.

Greenwood was a backup rotational defensive end in 1969 and 1970 under Noll before taking over as the starting left defensive end in the Steelers’ 4-3 defense ahead of the 1971 season. Once in the starting lineup, the 6-foot-6, 245-pound defensive end never looked back, racking up a career-high 11.0 sacks in 1971 before then recording 8.5 in 1973, earning his first trip to the Pro Bowl.

In 1974 Greenwood had the best year of his career, recording 11 sacks, one safety and three fumble recoveries as the Steelers won their first Super Bowl, earning a trip to the Pro Bowl, a First Team All-Pro accolade, and a sixth-place finish in the NFL’s Defensive Player of the Year award voting.

Greenwood followed up the ’74 season with 6.0 sacks in 1975, again earning a trip to the Pro Bowl and a First Team All-Pro accolade as the Steelers won their second Super Bowl. Quiet years in 1976 and 1977 saw him record just 7.0 sacks combined in 21 total games, though he still earned a Pro Bowl trip in 1976.

Pastorini, who was sacked only 15 times during the regular season, is sacked by L.C. Greenwood. pic.twitter.com/3AserPBqfc

Though sacks weren’t an official statistic until 1982 — one year after Greenwood’s career ended — Pro Football Reference went back and charted every game and compiled sacks statistics. For his career in the black and gold, Greenwood’s 78.0 sacks ranks second all-time, just 2.5 behind James Harrison, and half a sack ahead of Hall of Famer Joe Greene.

Aside from his prowess as a pass rusher, Greenwood also had 14 fumble recoveries in his career, including an NFL-high five in 1971.

He did his best work on the biggest stages too, batting down two Fran Tarkenton passes in the Steelers’ Super Bowl IX win over the Minnesota Vikings, before then sacking Dallas Cowboy’s quarterback Roger Staubach four times in the Steelers’ win over Dallas in Super X. His total of five sacks in four Super Bowls is unofficially the NFL’s best mark overall, though Denver’s Von Miller and Dallas’s Charles Haley’s 4.5 sacks officially rank as the most ever for a player in Super Bowl history.

Only one player has ever collected more than three sacks in a #SuperBowl…#Steelers stud L.C. Greenwood, who dropped Cowboys quarterback Roger Staubach four times in Super Bowl X. pic.twitter.com/WmYv20w8cX

Knowing all that Greenwood accomplished on the field as a member of the Steelers, it’s a real shame he’s not in the Hall of Fame.

Twice, Greenwood was a finalist in 2005 and 2006, but he wasn’t elected. Since then, he has not gotten much attention overall, including in recent days when the NFL announced it the seniors and coaches/contributors’ categories for the Class of 2023, which featured 25 player finalists and 29 coaches/contributors finalists.

Not a single mention of Greenwood.

According to Pro Football Reference, the Hall of Fame monitor, “is a metric designed to estimate a player’s chances of making the Pro Football Hall of Fame using AV, Pro Bowls, All-Pros, championships, and various stat milestones. The players listed below are the top 250 HOFm-rated players who played ILB starting in 1955 or later for at least 50 career games. A score of 100 is around the average modern-era inductee.”

Looking at the defensive end position, Greenwood ranks 16th all-time with a HOFm score of 82.10, just one spot behind former Indianapolis Colts’ star defensive end Dwight Freeney, who will likely get into the Hall of Fame. 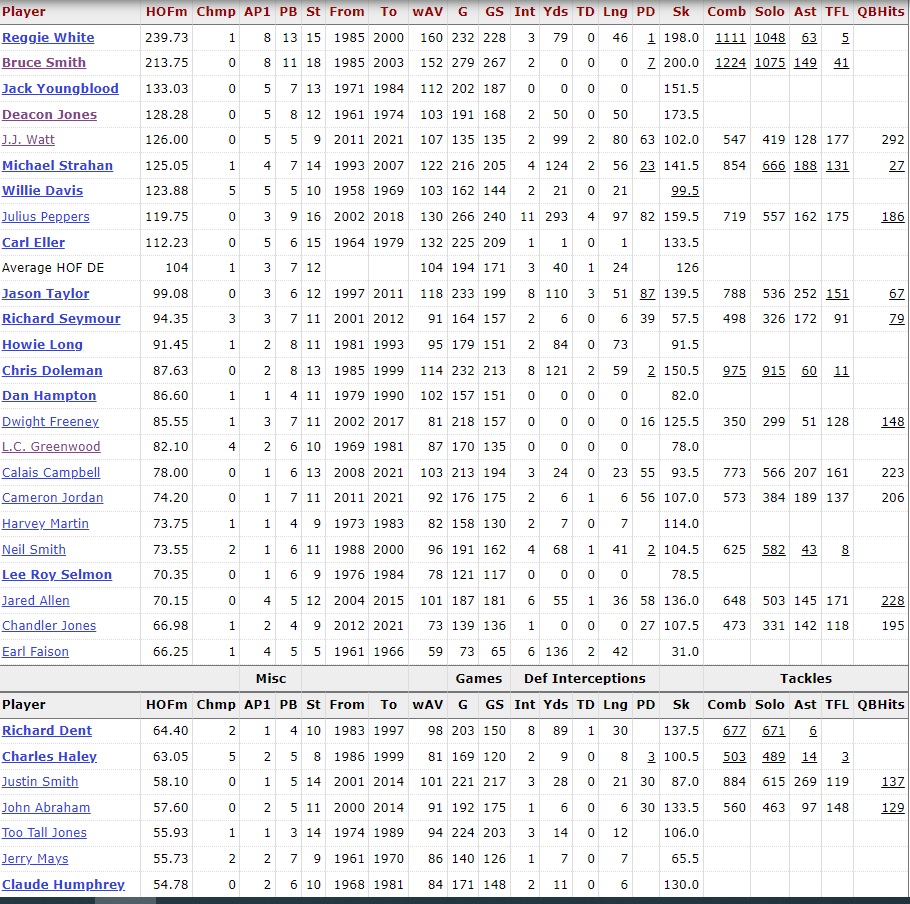 Per the HOFm average for a Hall of Fame defensive end, the position needs at least one championship, three First Team All-PRo accolades, and seven Pro Bowls while starting an average of 12 seasons.

Greenwood pretty much meets those metrics with four Super Bowls, two First Team All-Pros, six Pro Bowls and 10 years as a full-time starter. The only number Greenwood could be punished for is the 78.0 sacks, which placed just half a sack behind Selmon. However, Richard Seymour was just elected to the Hall of Fame and he had just 57.5 sacks for his entire career and had three Super Bowl titles, three All-Pros and seven Pro Bowls.

Knowing some of the talent that’s in the Hall of Fame at the position, it’s truly baffling to see Greenwood still not get enough credit or love today. That needs to change.

Though Greenwood, who died in 2013, didn’t quite care for the Hall of Fame accolade, it would be wonderful to see him alongside “Mean” Joe Greene, Jack Lambert, Jack Ham, Donnie Shell and Mel Blount in the Pro Football Hall of Fame as members of the Steel Curtain. He more than earned it while on the field.