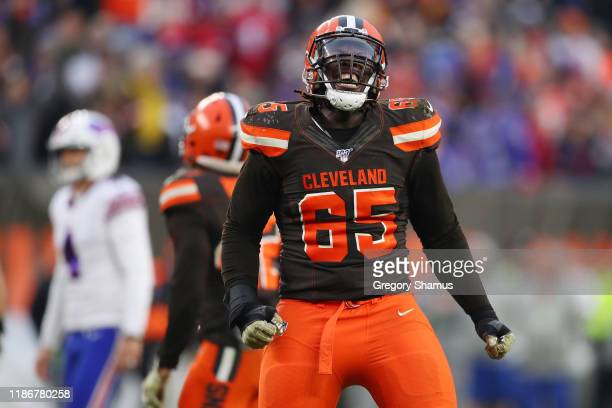 In a busy offseason unlike many have ever seen from the Pittsburgh Steelers, one move on the roster stands out above the rest as the black and gold’s “most savvy” move of a rather active offseason overall.

That move? Signing veteran defensive tackle Larry Ogunjobi on June 21 to a one-year deal worth up to $8 million with incentives.

Steelers get a steal in Larry Ogunjobi. Similar dimensions to Stephon Tuitt, with the potential to affect opposing offenses like-as-like as a pass-rusher and run defender. No. 65 is a bad dude. pic.twitter.com/HJhGrX4bee

Ogunjobi is coming off of a Lisfranc injury suffered in the Bengals’ Wild Card win over the Raiders in January, resulting in him missing Cincinnati’s run to the Super Bowl, and in turn seeing his free agency chances torpedo after a failed physical with the Chicago Bears due to the injury.

He was able to land on his feet in a good situation in Pittsburgh though, becoming the “most savvy” move of the offseason from the 33rd Team’s Nicholas McGee Thursday afternoon.

“The Steelers already had excellent defensive line depth before they added Ogunjobi to the mix in late June,” McGee writes for the33rdteam.com. “Benefiting from Ogunjobi failing a physical with the Bears in free agency, the Steelers brought in a penetrating defensive tackle coming off a career year in which he had 7.5 sacks and 16 quarterback hits for the Bengals. Ogunjobi has double-digit quarterback hits in three of the last four seasons and, playing on a front with T.J. Watt and Cameron Heyward, is in an excellent situation to produce in a substantial way for a team that will likely need the defense to carry the load.”

It’s a massive stretch from McGee to call the Steelers’ depth along the defensive line pre-Ogunjobi “excellent,” that much is certain. It was fine depth overall, but was significantly impacted with the retirement of Tuitt, which was set to force Chris Wormley — coming off of a career-high 7.0 sacks in 2021 — back into the starting lineup full-time, while also pushing Isaiahh Loudermilk and rookie DeMarvin Leal further into the rotation overall.

The signing of Ogunjobi gives the Steelers plenty of wiggle room though. When healthy, Ogunjobi is a real force along the defensive line, one that can shoot gaps, disrupt plays in the backfield and really get after the quarterback at a rather impressive rate. It’s a great addition overall to a defense that will be counted on early in the season to carry the load for a rebuilt offense under head coach Mike Tomlin.

If Ogunjobi is healthy and can return to form, the Steelers’ defensive front will be a load to handle weekly.

Elsewhere in the AFC North, McGee listed the Browns’ trade for wide receiver Amari Cooper, the Bengals’ drafting of safety Dax Hill, and the Ravens’ signing of veteran offensive tackle Morgan Moses as the respective most savvy moves for each team.