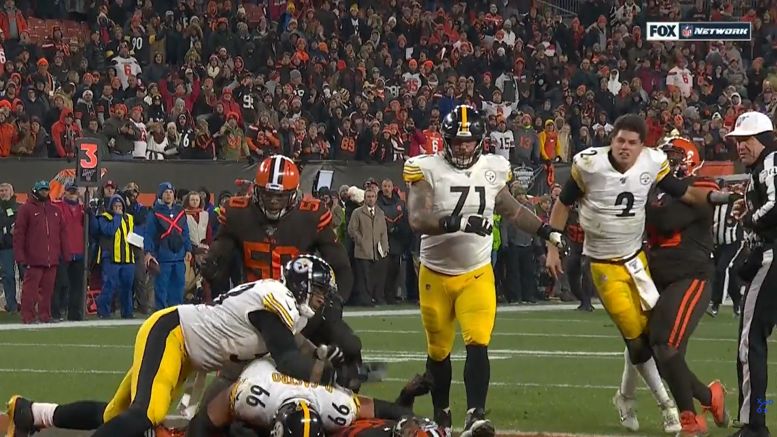 He might not have been right in the middle of one of the single most explosive moment in the history of any rivalry the Pittsburgh Steelers have had with any team, but Larry Ogunjobi was certainly on the periphery, and not as a bystander.

As you might recall, the former Cleveland Browns defensive tackle was the one who shoved quarterback Mason Rudolph to the ground after he had been struck in the head with his own helmet by Ogunjobi’s teammate, Myles Garrett, during a primetime game in the 2019 season.

Now the two of them are teammates after the Steelers signed Ogunjobi to a one-year contract this offseason, almost surely in direct response to Stephon Tuitt’s retirement. While it is not known if the team discussed the move with Rudolph beforehand, the defensive tackle did say that Rudolph reached out to him after signing. And the Steelers have no time for bad blood, according to Cameron Heyward.

“I called Larry, and he was like, ‘Is it gonna be weird at all?’. And I was like, ‘No, we are all focused on winning right now’”, the 13th-year veteran defensive lineman said on his new podcast, Not Just Football. “I think you have to be able to work together, and just try to accomplish a common goal. To keep talking about stuff that happened in the past only holds back the team”.

Garrett was indefinitely suspended for his action, which was clearly beyond the bounds of football, in addition to being ejected from a game that had just seconds to go. Ogunjobi was also ejected, and he served a one-game suspension (Steelers center Maurkice Pouncey was suspended for two games).

“I saw my teammate getting jumped on and I went over to go help him out”, Ogunjobi said after that 2019 game. “I’m not a dirty player and I’m not trying to hurt anybody. I feel like if it was you and your teammate in that situation you would do the same thing”.

Of course, the person he attacked was not either Pouncey or David DeCastro, who were the ones jumping on Garrett. Rudolph was standing with his arms up expressing incredulity over what happened and wasn’t even looking. You can bet he’s going to be asked about it the first time he’s available for questions at training camp, though.

“I think Larry and Mason have already talked”, Heyward said. “I haven’t done anything to work on that, but I think Larry was very open and upfront about it. He wanted to make sure everybody was on the same page and didn’t want to let anything happen. He’s been all in, and I think him just addressing it and being straightforward is huge for our team, and now we’re just focused on football”.

The Steelers signed Ogunjobi shortly after minicamp, so he’s not been in a Steelers uniform yet. He likely hasn’t even met the majority of his teammates since signing, but he will next week. Those who were on the team in 2019 would probably like to hear more of his side of the story.