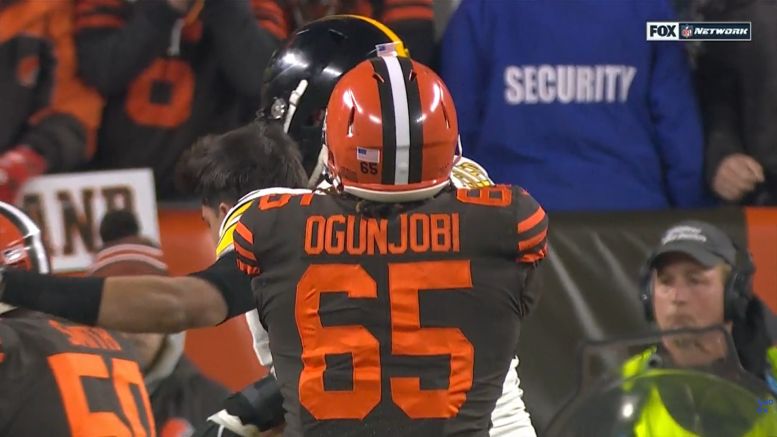 The Pittsburgh Steelers recently got themselves a new starting defensive lineman in the form of Larry Ogunjobi, who replaces the starting defensive lineman they just lost to retirement. The former Cleveland Brown spent the 2021 season with the Cincinnati Bengals, where he had a career year and earned a deal worth over $13 million per season from the Chicago Bears back in March, which only fell through because of a failed physical.

While he acknowledges that he is still rehabbing the foot injury that torpedoed his deal in Chicago, though, and even seemed to be unwilling to commit to being ready for the opener, he also believes that he is becoming a better player because he’s being allowed to explore parts of his game that were limited for reasons beyond his control early on.

“My first four years in Cleveland, I never really got to use all of those tools, and being able to play three-technique and really utilizing my skillset and my athleticism, which was really important”, the sixth-year veteran told Pat Kirwan and Jim Miller on the Movin’ the Chains program on SiriusXM Radio. “It gave me the ability to just open up my game a lot more and put me in more positions to get more one-on-ones and affect the quarterback and just help the team win”.

A third-round pick by the Browns in 2017, Ogunjobi was limited to working as a defensive tackle, and spent most of his career playing with Myles Garrett, as well as Olivier Vernon and now Jadeveon Clowney as the opposite edge.

Spending a season in Cincinnati, he was encouraged to explore his athletic ability and make more plays for himself rather than simply making plays for the guys around him, something that he expects to be able to do in Pittsburgh as well.

But for how long? After all, he only signed a one-year contract with the Steelers worth $8 million, with the intention of hitting free agency again in March. He signed a three-year deal worth over $40 million. Would Pittsburgh re-sign him in 2023 for a similar deal?

In reality, it’s not impossible. It’s not like it slots him higher than Cameron Heyward, whose 2020 four-year extension pays out at more than $16 million in new money. But it’s not a bad idea to figure out how it all plays out through this season first before worrying about the future.

Tuitt’s retirement created this opening, and now Ogunjobi will have the opportunity to work with some All-Pros who will make him look good. And if the run defense is magically fixed, he gets to take some credit for that to add to his free agency portfolio. Not a bad deal when you really think about it.