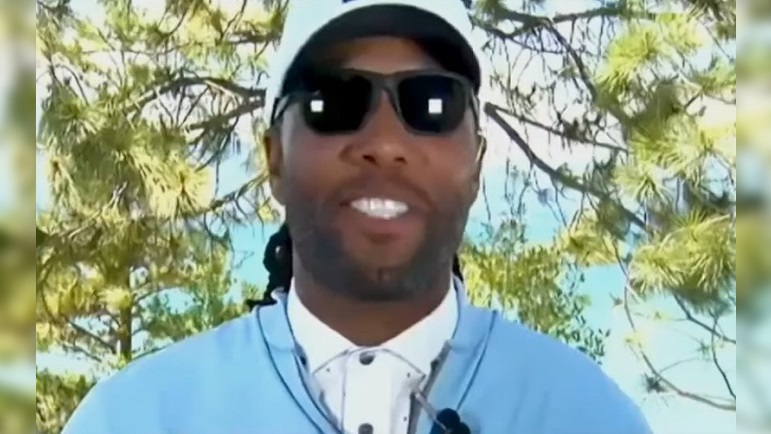 While former NFL wide receiver Larry Fitzgerald seems to be done with football for good at this point, the University of Pittsburgh product still has his finger on the pulse of the game. Recently, Fitzgerald, who participated in the American Century Championship at Lake Tahoe over the weekend, recently answered some questions related to football in the Pittsburgh area. One of those questions was about new Steelers quarterback Kenny Pickett, who is also a University of Pittsburgh product.

“I’m real excited for Kenny and what he’s gonna be able to do with the Pittsburgh Steelers,” Fitzgerald said, according to WPXI. “I hope he’s gonna win that job and go out there and perform the way he’s been performing. He’s familiar with the practice facilities, has produced in a large way at Heinz Field, so there’s a lot of familiarity with him and I know the city’s gonna get behind him.”

There’s familiarity indeed on Pickett’s part as he played five seasons at Heinz Field in Pittsburgh. Pickett has a lot in common with Fitzgerald as well, as last season he was the first University of Pittsburgh Heisman Trophy finalist last since Fitzgerald in 2003.

While Fitzgerald predictably hopes that Pickett wins the starting quarterback job this year, it doesn’t seem likely that it will happen. The Steelers signed veteran quarterback Mitch Trubisky to a two-year contract early in the offseason, and barring an injury this summer, it seems destined that he will be the team’s Week 1 quarterback nine weeks from now when the Steelers play on the road against the Cincinnati Bengals.

The University of Pittsburgh obviously has produced several NFL players, and several of them are already in the Pro Football Hall of Fame. That list includes the likes of Chris Doleman, Mike Ditka, Tony Dorsett, Russ Grimm (2010), Rickey Jackson (2010), Dan Marino (2005), Curtis Martin, Joe Schmidt, and Jimbo Covert. Fitzgerald is likely to be enshrined in Canton in the near future, and the same goes for Aaron Donald once he finally decides to retire. Perhaps Darrelle Revis will get in soon, as well.

Fitzgerald, who earned unanimous All-American honors and was named Big East Offensive Player of the Year, First-Team All-Big East, and Fred Biletnikoff and Walter Camp Award honoree during his college career at Pitt, made it clear that he thinks the University of Pittsburgh will continue to produce great football talent for many years to come.

“We’re gonna continue to produce the Aaron Donalds and the Darrelle Revis and the Kenny Picketts of the world who will uphold the legacies and traditions of the great University of Pittsburgh,” Fitzgerald said. “The Pitt tradition and the university are in position to be successful for a very long time because of guys like Coach Narduzzi doing it the right way.”