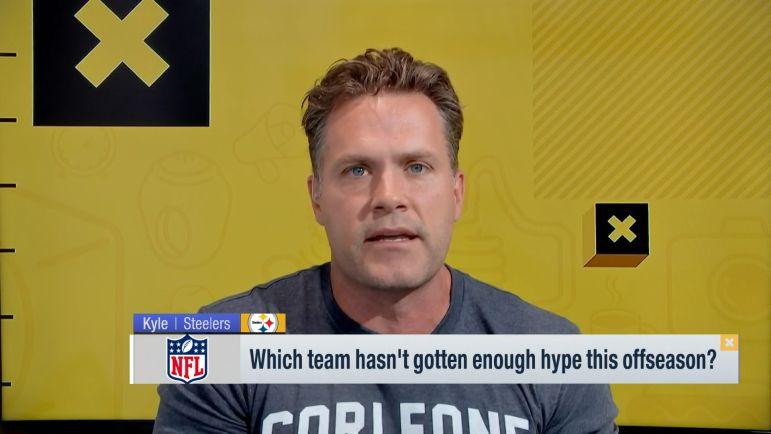 The Pittsburgh Steelers are not always the team that everybody loves, or at least loves the chances of their having success in any particular season. Often enough, though, they somehow find a way to exceed expectations—even if those expectations are low.

The 2022 season would qualify as one of those seasons in which there isn’t much expected from the six-time Super Bowl champions. Coming off of the end of the Ben Roethlisberger era, with a Bears castoff and a rookie from one of the weakest quarterback classes in decades, there aren’t a lot of people betting on them finding Lombardi number seven this year.

But there is still good reason to believe that they could do better than most seem to expect. There are plenty of prognosticators out there anticipating that they will have a losing record this season, which is something that has been predicted for three years running now. I wouldn’t take that bet, and neither does Kyle Brandt, who selected the Steelers as his team he believes needs more hype in 2022 than they are getting for a Good Morning Football segment on the NFL Network:

They’re not gonna go 6-11. They never do, they never will. Here’s what’s gonna happen. Late October, we’re gonna be sitting around the show saying, ‘Wow, look at the Steelers, they’re 6-3. How did that happen?’. Because they’re the Steelers!

I don’t give a damn if it’s gonna be Mitch Trubisky or Kenny Pickett. I don’t care who it is. I don’t really think it matters. This division gets talked about so much; the Browns for that ridiculous mushroom cloud over the organization, the Ravens for Lamar and his future, and then the Bengals because they’re the belles of the ball.

These guys right here will win. Defense, running game, all the old trappings. I don’t care who the quarterback is. As long as the coach is there and the defense is there—Minkah Fitzpatrick signs this massive deal, one of the best safeties in the league, it’s not even a blip on the radar.

Now, Brandt doesn’t actually say what he thinks the Steelers will do this year. He doesn’t say that they’re going to win the Super Bowl, or win a playoff game or two, or win the division. He just implies that he expects them to do better than a losing record.

That’s not really overwhelming praise—although he did suggest they’ll be 6-3 near midseason—but I do think it’s reasonable. Can the Steelers be in that ballpark of 6-3 about halfway through the year? Sure, if a number of things go well in terms of everything coming together on offense and no snafus on defense.

But can this team win the AFC North? Can they continue their fortunes over the Ravens, and break their losing streak against the Bengals? Can they? Yes. Will they? Well, that’s harder to say.