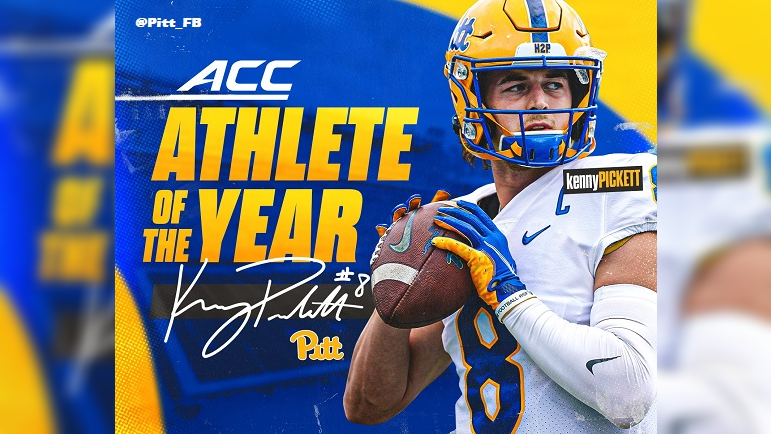 Following a magical run to an ACC championship and a Heisman Trophy finalist in a year in which he threw for 4,319 yards, 42 touchdowns and just seven interceptions as the Pitt Panthers finished 11-3 and ranked 13th in the final Associated Press pole of the season, Pickett was named the ACC’s Anthony J. McKelvin Male Athlete of the Year award winner, becoming the first Pitt student-athlete — male or female — to win the award in ACC history.

“Kenny had a historic year, not only for Pitt but also for the Atlantic Coast Conference,” Pitt head coach Pat Narduzzi said in a statement, according to pittsburghpanthers.com. “He represented our university, the city of Pittsburgh and the ACC with the utmost class every step of the way. Kenny is a very deserving recipient of this prestigious award and we are, yet again, tremendously proud of him.”

ACC Male Athlete of the Year 🏆

“It is a tremendous honor to receive this award from the ACC, a conference that annually produces so many accomplished athletes,” Pickett said in a statement after winning the award, according to pittsburghpanthers.com. “As always, I share this honor with my Pitt teammates, coaches and staff. Winning the ACC championship together is something I will cherish forever.”

After his run of dominance in 2021 at Pitt, Pickett became the first quarterback taken in the 2022 NFL Draft at No. 20 overall by the Pittsburgh Steelers, keeping the budding star in the Steel City in front of a faithful fanbase. Pickett looks to get his NFL career off to a fast start as he enters his first training camp with the black and gold mired in a quarterback competition with veterans Mitch Trubisky and Mason Rudolph.