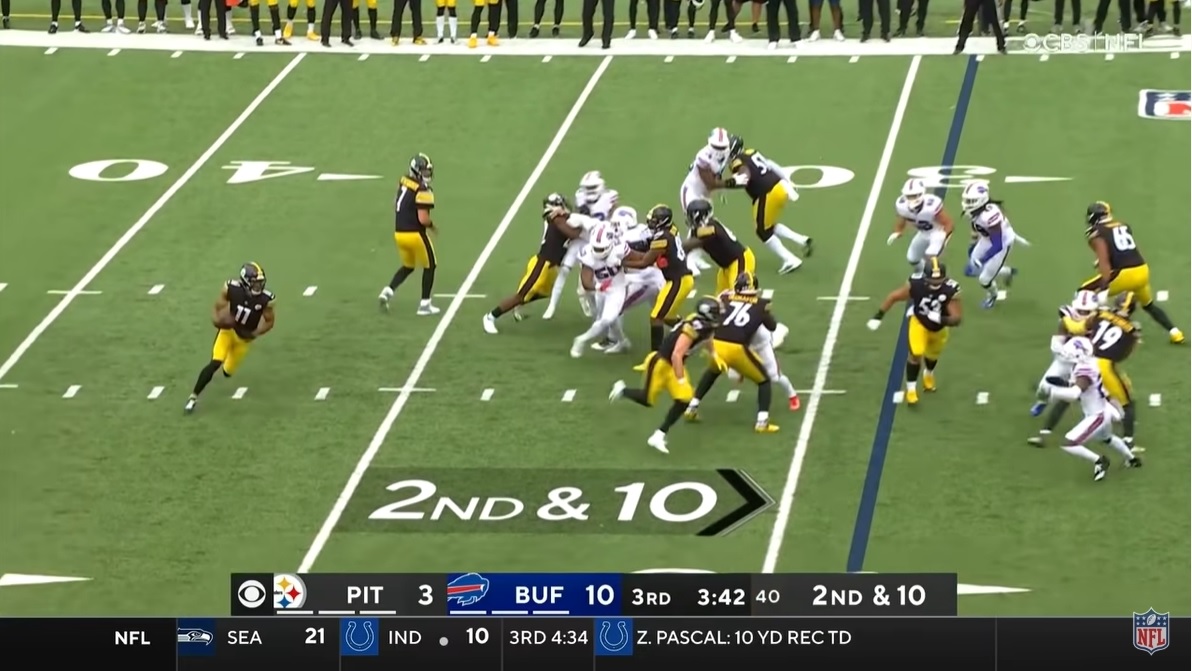 It’s already been very well-documented about how the Steelers need to find a sufficient backup to running back Najee Harris before the season begins, perhaps by due diligence of their own current players at training camp. Or maybe another player off the cap casualty scrap heap. Perhaps though what Offensive Coordinator Matt Canada has in mind is using a patented jet sweep game, the likes of which we’ve already seen already with various players.

The team’s offense was heavily favored to the passing game the last few seasons, in large part due to a very weak offensive line unable to create any push up front. They utilized the short passing game basically as an extension of the running game, and one need look no further than ex-Steeler JuJu Smith-Schuster’s YPC average of only 8.6 as a testament to that. As the team ushers in a new era of quarterback play, be it with free agent acquisition Mitch Trubisky or rookie first-rounder Kenny Pickett, one thing is certain, and that is that the tables will be turning to favor the running game.

What’s also important when doing this is to minimize the wear and tear on Pro Bowler Harris, a 244-pound bruiser who led the NFL in touches last year with 381. The jet sweep can handle that. It’s had a mixed bag of results thus far under Canada’s tutelage, but a lot of that had to do with the statuesque Roethlisberger’s pocket presence. Misdirection is a key element of what makes jet sweeps a success, and since defenses didn’t fear #7 to ever take off running, teams began to adequately defend against it. Misdirection causes defenders to pause or slow down their reaction process, and that’s what makes this play successful.

Last year, Chase Claypool ran 14 times, mainly on designed jet sweeps, for 96 yards and a 6.9 YPC average. That’s basically three yards per carry better than Harris’ 3.9. Diontae Johnson was also utilized on these play types, running for 53 yards and a 10.6 yard-per-clip average. You get the picture: there’s enough evidence to suggest that these plays can be very effective. Not that you want your Pro Bowl wide receiver running these a whole lot, but there’s another wrinkle to this: the team added several very viable options to run these types of plays in the draft in speedster extraordinaire Calvin Austin III and fullback-turned-H-Back Connor Heyward. Heyward is more of a jack-of-all-trades type and speed isn’t exactly his thing, but he’d be more than adept at taking a handoff or two.

The one player that intrigues me on jet sweeps more than any other is Austin, with his world-class 4.32 speed. He’s not the biggest guy at only 5-foot-7 and 170 pounds, but neither is Tyreek Hill, and we see what his speed is capable of. If we go back to last season at Memphis, Austin only had one carry, but he made it count, taking it 69 yards to the house. He also averaged 27 yards on punt returns, and his game has a very Dexter McCluster-like feel to it, in the sense that if you give him a sliver of daylight, it’s six points.

For an offense entering the post-Roethlisberger era, it’s apparent the run game will become the focal point of the entire offense, with the QB supplementing that. However, as I mentioned earlier with the short passing game of recent seasons becoming an extension of the run game, I look for Canada to add some more layers to the offense, with the receivers now lending a hand to spark the ground game, namely Austin with his jitterbug-style play and Olympic speed. And perhaps instead of reaching into the free agency bin for a guy like David Johnson or Justin Jackson, the team will look to instead get creative with the playbook to not only find success in moving the chains, but also prolong the career of the workhorse they have in their backfield.