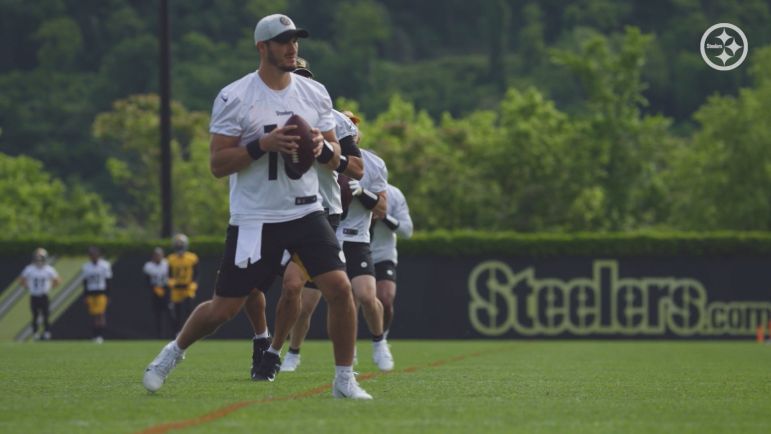 Like you, me, and every other Steelers’ fan, Jerome Bettis has an opinion on the Steelers’ quarterback situation. He admits he doesn’t know who will win the job but thinks competition will bring out the best in everyone.

He joined NFL Total Access to talk about the battle.

“It’s going to be very competitive, I believe, because they’ve gotta figure out who’s going to be the quarterback,” he said. “They’ve got a playoff caliber football team. We saw that last year and now they need a leader. They need a quarterback that can complete that third and six, third and eight.”

For the first time in roughly 15 years, the Steelers’ offense won’t center around the passing game. It figures to look more like Ben Roethlisberger’s first few NFL seasons when the team relied on a ground-and-pound run game and suffocation defense to win games. Bettis, of course, was part of that group in 2004 and 2005 and sees parallels from then until now.

“They’ve got a really good running game with Najee Harris. I think he’s going to take it to another level in his maturation process. But I think I really believe the quarterback is gonna be the question, because right now, if one of these guys can really step up, this team can be a little bit better than a lot of people think.”

Quarterback is the name of the game and the Steelers sit in an AFC North with top-tier talent. Joe Burrow in Cincinnati, Lamar Jackson in Baltimore, and Deshaun Watson in Cleveland, though his 2022 status remains cloudy. The AFC at large has the bulk of elite QB play and only got better this offseason with Russell Wilson being traded from Seattle to Denver.

A good run game and stout defense can make Pittsburgh a playoff team. But quarterbacks determine how far teams go. Pittsburgh is banking on Pickett being the future of the franchise and joining that elite cast. For now, he’ll battle veterans Mitch Trubisky and Mason Rudolph for the Week One job. Trubisky will enter camp as the favorite but it’s an open job and the Steelers will pick the best man for the job.

Hall of Famer @JeromeBettis36 joined @MJAcostaTV to talk about his golf game and expectations for his @steelers in 2022. pic.twitter.com/xdSGorU4mo