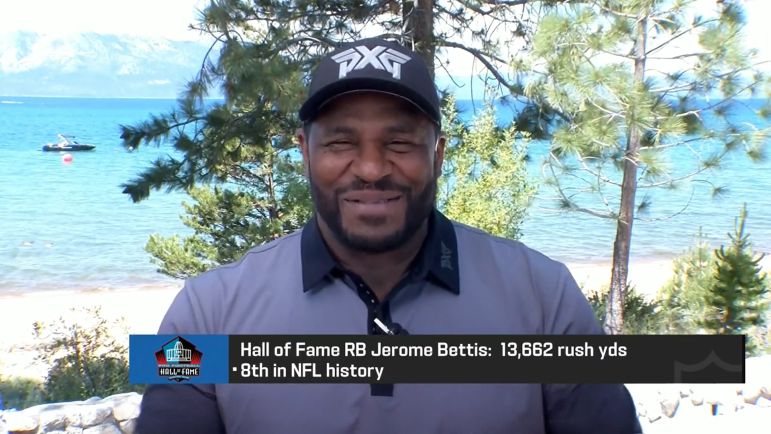 For as storied a career as he may have had, it’s fair to say that former Pittsburgh Steelers running back Jerome Bettis isn’t one who lives in the past. Not only has he pursued entrepreneurial opportunities during his post-playing career, he even recently returned to Notre Dame to complete his college degree, almost two decades after retiring.

Indeed, even when it comes to football, he’s more likely to talk about the current state of the Steelers, and of running back Najee Harris, rather than himself and his own playing career—unless it gets brought up. He was asked on Total Access on the NFL Network if he watches his old highlights, for example.

“I don’t. It was a great part of my life, and I’ve gone forward. The times that I do watch is when my kids want to see how I played”, he said. “My son now is a budding football player in his own right, and now he kind of wants to see how tough I was, or something like that. And I try to tell him, ‘I was pretty tough in my day!’. Those are the only times that I watch”.

Now, Bettis has himself an impressive highlight reel. That’s pretty much a given when you’re a skill-position player and you’re in the Hall of Fame. It’s pretty hard to demonstrate yourself as an elite running back or wide receiver without assembling an impressive-looking compilation of plays.

But that was a day at the office for Bettis. He has the memories—he has the stories. He doesn’t necessarily have to spend his days reliving his past glories. After all, he was the one who did them. I’m sure he remembers some of his biggest highlights just fine without needing to watch them over and over again.

Unless, of course, his son starts acting up and calling into question whether or not he really was everything he says he was. And he was, of course, all that and more. With over 13,000 rushing yards and 91 touchdowns, he is one of the all-time great running backs, and that is why he has a gold jacket.

And it’s not like he doesn’t have plenty on his plate these days. He’s worked in media in one form or another pretty consistently since he retired—another reason that he’s likely to be more interested to talk about what’s going on in the league right now than calling back to what he was doing 20 years ago.

That doesn’t even touch on his long history of charitable work, particularly through The Bus Stops Here foundation, which goes all the way back to 1997, with plenty of overlap with his active football career.