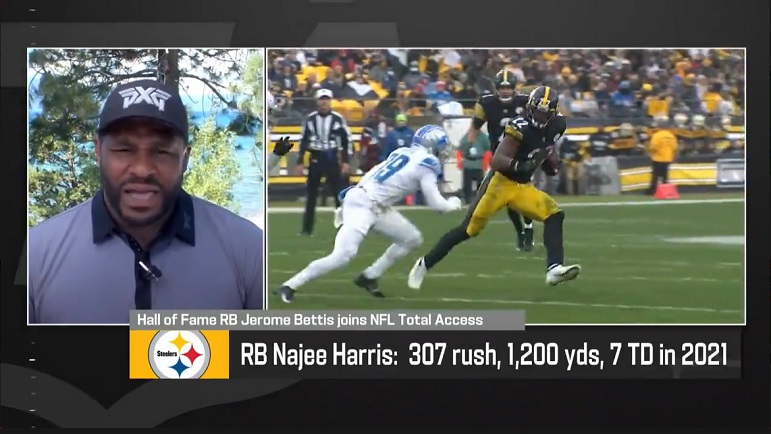 The Pittsburgh Steelers will likely lean heavily on second year running Najee Harris in 2022 and especially with the team having a new quarterback under center. While Steelers Hall of Fame running back Jerome Bettis isn’t quite sure how the quarterback position will play out for his former team in 2022, he made clear again during a Wednesday interview on ‘NFL Total Access’ that he has faith in Harris doing his part to help the team in his second season.

“What I love is is that his hunger to learn, to want to be better,” Bettis said of Harris. “A lot of times, you know, you get a young guy, first-round draft pick, you come in and you say, ‘Okay, you know, I’m here now and, you know, I’m the best things since sliced bread.’ And that’s not the case with Najee. I mean, he reached out to me. He wanted to learn more. ‘Hey, talk to me about this, explain to me this.’ And that tells me that he wants to be a better football player every year he steps on the football field. So, that tells me that I think the running game is in great hands.”

Hall of Famer @JeromeBettis36 joined @MJAcostaTV to talk about his golf game and expectations for his @steelers in 2022. pic.twitter.com/xdSGorU4mo

This isn’t the first time that we’ve heard of Harris reaching out to Bettis since he was selected in the first round of the 2021 NFL Draft out of Alabama and it likely won’t be the last. It’s a great gesture on the young running back’s part and you can bet he won’t get any bad information from Bettis along the way.

Bettis knows all about being a bell cow running back for the Steelers and being part of an offense that leans heavily on a running game. That’s exactly what Harris can likely look forward to in 2022 after touching the football nearly 400 times as a rookie in 2021.

Harris seems to have made a goal to become even more of a team leader in 2022 as well and that’s likely something else that will endear him quite a bit to Bettis.

Interesting enough, Bettis’ best all-purpose yards season during his long career came in 1997, which just so happened to be his second year in Pittsburgh. That season, Bettis registered 1,775 total yards from scrimmage and nine total touchdowns on 390 total regular season touches. That 1997 season ended in Bettis being voted to the Pro Bowl and Second-Team All-Pro.

Last season, Harris recorded 1,667 yards from scrimmage and 10 total touchdowns on 381 total touches. Might he be able to top that 1997 season from Bettis in 2022? It’s quite possible if he stays healthy and plays in at least 16 games. I bet Bettis believes Harris can post those kind of stats in 2022 as well.