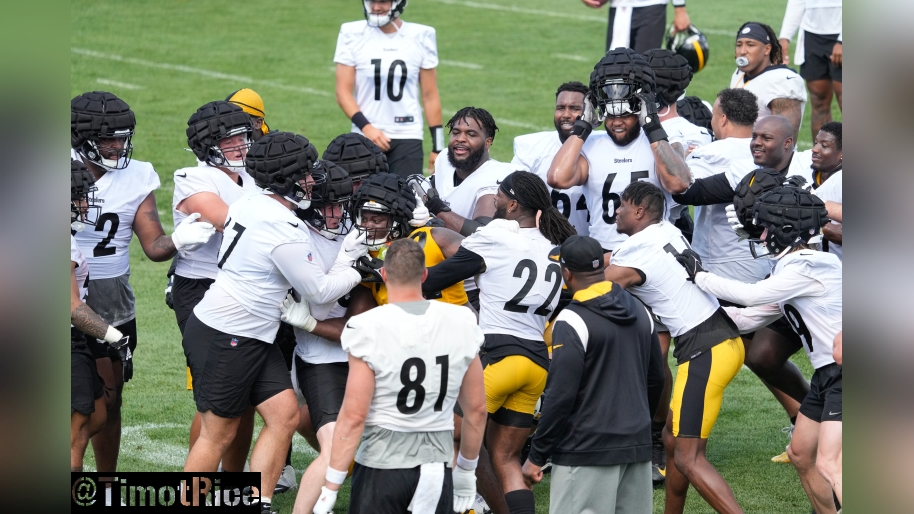 As least as gauged by fan interest, the biggest story of the day out of Latrobe game on the last play of practice, at the end of which a fight broke out among players—dozens reportedly involved, ultimately, with Duquesne rookie tackle Jake Dixon in the middle of it.

The most confusing aspect of the play seemed to be the primary involvement of somebody who wasn’t on the field, specifically third-year defensive lineman Carlos Davis, who is said to have come flying out from the sidelines to confront Dixon. The reason for that, as relayed by Jeff Hathhorn of 93.7 The Fan, may not be so surprising:

Dixon was involved in a fight. Last play of the day, Dixon was blocking Khalil Davis, and he was finishing that block on a run play—probably longer than he could have, but as Dixon would tell you, ‘Hey, I’m trying to make a name for myself, I’m playing through the whistle’. And Davis took exception to it, and there was a little shoving, and all of a sudden, his brother, Carlos Davis, came running across the field and hit Dixon, as Dixon was just standing there, and a scrum ensued.

So there you go. Somebody messes with your twin and they mess with you. Do you think this wouldn’t have happened if Mike Pouncey were ever in Pittsburgh? I’m sure Urban Meyer, whenever he’s got a free lap, could tell a story or two about how the Pounceys had each other’s backs. Hell, Maurkice just seemed to be looking for a back to protect sometimes.

The Davis brothers were drafted one round apart in 2020, Khalil in the sixth by the Tampa Bay Buccaneers, Carlos in the seventh by the Steelers. Both made their respective rosters, despite being late-round rookies facing a truncated offseason due to the pandemic.

The two of them shared a house, and they had to divide it up between them while Carlos studied the Steelers’ playbook and Khalil studied the Buccaneers’. Khalil was cut last year, though, and ultimately found his way to the Steelers’ practice squad after they had originally tried and failed to claim him off waivers.

Both brothers are currently fighting what is looking like an uphill battle to claim a roster spot this year, with the defensive line room already filled to the brim with Cameron Heyward, Tyson Alualu, Larry Ogunjobi, Chris Wormley, Montravius Adams, Isaiahh Loudermilk, and rookie third-round draft pick DeMarvin Leal.

It may be just as likely that they are competing, maybe one against the other, for a spot on the practice squad, with Henry Mondeaux, Doug Costin, and rookie college free agent Donovan Jeter also vying for that opportunity.

Both of the Davis brothers had shown some flashes during their respective rookie seasons, on their respective rosters, but the 2021 season was a dude for both. Carlos was injured, and Khalil was phased out within a deep depth chart. But there’s still talent in there. And some fight, as well, literally and figuratively.