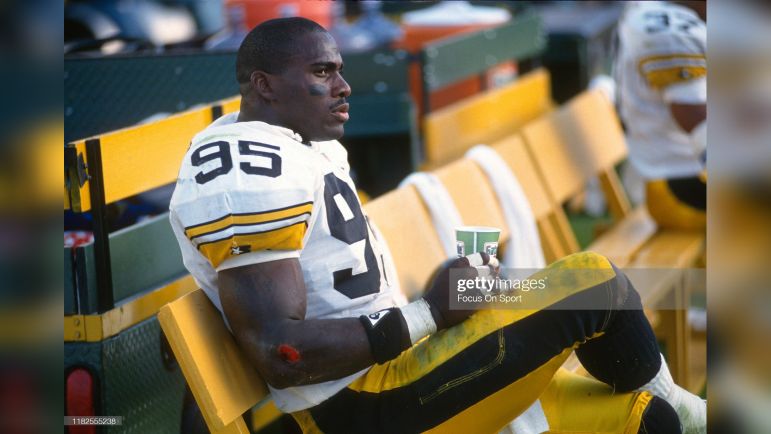 I hope you’re sitting down for this, but apparently, it’s hard to win the respect of Greg Lloyd, the man who was known for wearing a t-shirt that read, ‘I Wasn’t Hired for My Disposition’. The former Pittsburgh Steelers linebacker played with a meanness that wasn’t altogether insincere, which translated into great success on the field.

But that on-field ability was the product of diligent and dedicated work in practice and in the film room. It was his mission never to be outworked, and he expected the same from his teammates, and from his coaches. Even the coaches who didn’t play the game at the NFL level—like his linebackers coach, Marvin Lewis.

“My thing was, if you didn’t play football, you didn’t get my respect of you as a coach”, he recently told former teammate Leon Searcy on XL Primetime on 1010 XL / 92.5 FM. “I didn’t disrespect you, but you weren’t gonna get called coach. I called Marvin ‘Marvin’ for about three years. ‘Hey Marvin, hey Marvin, hey Marvin’. So I think the first time I called him Coach, I caught him off-guard”.

Lewis was hired in 1992, fresh from coaching the Pitt Panthers’ linebackers for two years. When he came in, they already had Lloyd, Hardy Nickerson, David Little, and Jerrol Williams in that linebacker room—with a rookie Levon Kirkland, and Jerry Olsavsky. These are guys who knew what they were doing “You’re not coaching anything”, Lloyd said of Lewis’ job, claiming that he used to tell his coach to get out of the huddle and let the players figure it out.

Needless to say, it took time for Lewis to earn Lloyd’s respect, but it apparently happened eventually, perhaps at some point during that 1995 season when they went to the Super Bowl, after which he was hired away by the Baltimore Ravens to become their first defensive coordinator.

It could be hard to coach a group that felt like it didn’t really need coaching, though. And that was their mentality in the linebacker room, to a degree. “It became one of those things where guys were afraid to mess up because they were scared more of me and Woody than they were of Bill Cowher and Dick LeBeau, because we were gonna get in their ear”, Lloyd claimed.

Cowher and LeBeau are certainly a pair that you don’t want to let down. But imagine doing something wrong and then having to answer to Lloyd about why you messed up. I could imagine that a young player or two might have been extra cautious when they understood what the stakes were in that regard.