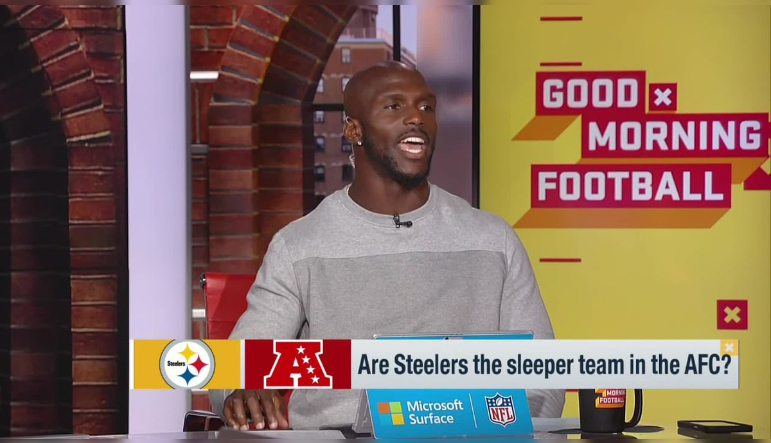 Typically, the words Pittsburgh Steelers and sleeper don’t quite go together.

This offseason though, they’re being paired together more and more as the black and gold transitions into a new era in the front office, at quarterback, and with the naming rights to the popular stadium on the North Shore.

Thursday morning on Good Morning Football, the cast featuring host Jamie Erdahl, and analysts Jason McCourty, Peter Schrager and Kyle Brandt debated whether or not the Steelers are truly a “sleeper” team in a loaded AFC ahead of the 2022 season. With the AFC West stacked top to bottom with premier talent, the AFC South featuring some improved teams, the AFC East having a true Super Bowl contender at the top, not to mention the Patriots and Dolphins lurking, and the AFC North home to the defending AFC champions in the Cincinnati Bengals, where exactly to the retooled Steelers sit in the discussion?

According to McCourty, who played 13 seasons in the NFL with the likes of the Tennessee Titans, New England Patriots, Cleveland Browns and Miami Dolphins, believes that the Steelers are certainly a sleeper and aren’t getting the respect they deserve as a franchise compared to some of the other teams that have been praised all offseason.

“We’re talking about Cincinnati, they’re going back to the Super Bowl. Cleveland Browns, Deshaun Watson joins the team. We haven’t talked about the Pittsburgh Steelers. So yes, they are a sleeper,” McCourty said on Good Morning Football Thursday morning, according to video via NFL.com. “Mike Tomlin is a terrific coach. Hasn’t had a losing season. This was even when Ben Roethlisberger was out with the elbow injury. He still found a way to have quarterbacks out there and for them to be a productive football team. This Steelers defense, we already said reigning Defensive Player of the year [T.J. Watt], Cam Heyward…I wouldn’t wanna be standing across from him and a bar fight. This team is very good on defense. They’re going to run the ball this year. And Mitch Trubisky in 2018 had a solid year. Numbers are very comparable to Ben Roethlisberger’s numbers were last year.”

Compared to other teams in the AFC, the Steelers are sleepers, much like McCourty said. Pittsburgh will boast one of the top defenses in the league, has a strong group of playmakers on offense, and still has Mike Tomlin in charge. While many will push back against the no-losing-seasons argument, it definitely matters in today’s NFL as the Steelers are always in the thick of things under Tomlin.

Has that resulted in playoff success? No, but the fact that the Steelers are playing in the postseason more often than not matters in the NFL where being a consistent contender is incredibly hard to do.

The “sleeper” tag though is something new for the Steelers. Not once when Ben Roethlisberger was under center for Bill Cowher and Tomlin were the Steelers ever considered a sleeper. Now, in a period of transition, there’s plenty of doubt and uncertainty surrounding the Steelers, raising those questions.

For Brandt, it’s a silly thing to do when it comes to the black and gold.

“I can’t see those two words on the screen at the same time. Steelers and sleeper,” Brandt said, according to video via NFL.com. “I think that they have transcended that. If you are sleeping on the Steelers, you’re not paying attention. I don’t think that they qualify…that’s not their weight class. I’m not sleeping on the Steelers. We’ve talked about them for months that you see the logo, you see the head coach and you’re like, they’ll be fine one way or another. I think that’s fascinating how they’re gonna get there.”

Brandt summed it up well, even if it’s not what people want to hear. The Steelers are always going to be there in contention, and they simply don’t qualify as a “sleeper” at least not right now. The franchise is too stable and consistent and has far too many great pieces to be that. Plus, the players on the roster like the fact that they’re being overlooked and doubted a bit.