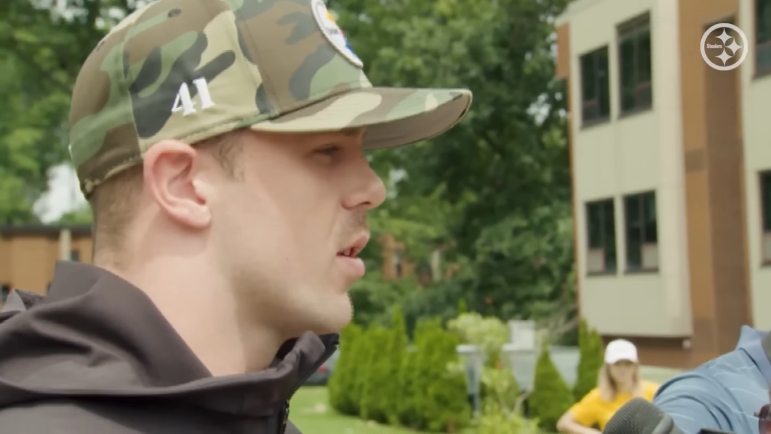 There’s no bad way to get ahead as long as you’re not hurting anybody while doing it. If you find a way that gives you an advantage in something that your method might not ordinarily be associated with, and it works for you, then all the more power to you.

But the uncommon training method is not so uncommon in professional sports. There’s actually a long history of professional athletes using unusual means to pursue improvement in their sport. Najee Harris does yoga. Lynn Swann picked up ballet. And for the Pittsburgh Steelers, inside linebacker Robert Spillane is seemingly willing to try just about anything if it works.

“I’ve found a lot of ways that may be unorthodox to some, but ways that I can definitely improve my game, and I’m excited to show it here in these coming weeks”, the veteran told reporters outside of the dorms at Saint Vincent College on report day yesterday, via the Steelers’ YouTube channel.

As you might expect, that response piqued the interest of a reporter or two, and he was asked to elaborate on some of the training methods that he has employed in pursuit of bettering himself as a football player.

“Focusing on sleep as recovery, extra hydration”, he said. “I love playing basketball to work on footwork and athleticism. Running routes, working with a track coach. I train with my shoes off a lot of the times. I train with my eyes closed. I do a lot of things that might seem weird to some, but it’s all intentioned to be the best”.

Sports science is a fruitful area of research right now, as is the industry attached to it on the backside becoming an increasingly profitable one. There is still plenty for us to learn about the human body, after all, so it should be no surprise that there are more ways for us to figure out about how to train these vessels to do what we want them to do.

“I follow a lot of great athletes, and there’s so many different ways to become, and train yourself to be, a better athlete”, Spillane said. “I focus on things that people might not look at as workouts, but if you’re being intentional about it, you can definitely find a way to get better”.

He should know a thing or two about great athletes. He has it in his genes. His grandfather was Johnny Lattner, a star Heisman winner at Notre Dame and a Pro Bowl first-round pick of the Steelers all the way back in 1954. His is one of the great ‘what if’ stories, as he joined the Air Force after his rookie season, whereafter he sustained a knee injury that ended his professional career.