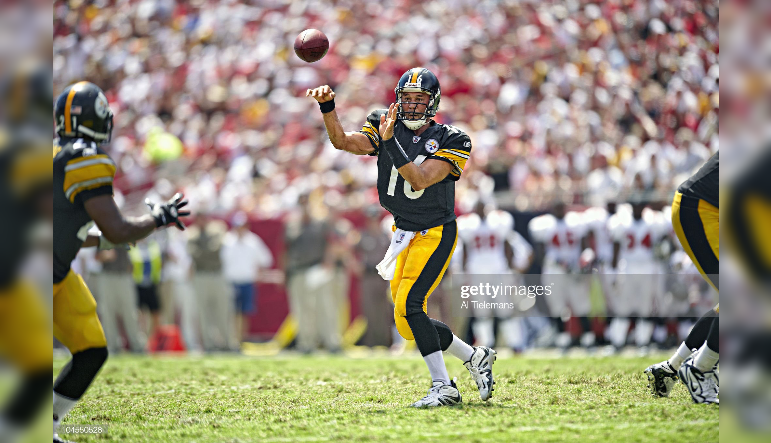 Throughout his eight seasons with the Pittsburgh Steelers, which featured 33 appearances and nine starts in the black and gold for his hometown team, quarterback Charlie Batch sure had some memorable moments and overall performances.

Few can top the performance he put on against the Tampa Bay Buccaneers on September 26, 2010 on the road, leading the Steelers to a 38-13 win over the Buccaneers, throwing three touchdowns in the process. With star quarterback Ben Roethlisberger suspended four games by the NFL for violating the league’s personal conduct policy, the Steelers turned to Dennis Dixon and then Batch to get through the first four games of the season.

Behind an elite-level defense that hadn’t allowed a touchdown through the first two games of the season as the Steelers sat 2-0, Pittsburgh cruised to a dominant win over the Buccaneers in Week 3 of the 2010 season in front of a packed house at Raymond James Stadium that was filled with Steelers’ fans, thanks to Batch’s efforts through the air.

Tampa Bay put up a fight under Raheem Morris early on, but Mike Tomlin’s team proved to be far too much, ripping off 31 unanswered points to put the game away for good.

Early on, Tampa Bay took a 3-0 lead on a 40-yard field goal by Connor Barth following an interception by Batch to Tampa Bay cornerback Aqib Talib on the second play from scrimmage. The veteran quarterback bounced back in a big way though. Opening up the third series of the game for the Steelers’ offense near midfield, Pittsburgh offensive coordinator Bruce Arians dialed a deep shot off of play-action for Batch.

Blessed with elite-level speed at receiver with Mike Wallace, Antonio Brown and Emmanuel Sanders that season, not to mention the toughness of Hines Ward, Batch heaved one 46 yards downfield for Wallace, who made a play on the football behind the unsuspected Cody Grimm of the Buccaneers, giving the Steelers an early 7-3 lead.

Batch did a tremendous job here maneuvering the pocket off of play-action, avoiding the early pressure allowed by right guard Doug Legursky to reset and fire one downfield for Wallace, who was simply incredible at getting deep and making plays during his time in the black and gold.

Tampa Bay responded with a scoring drive of its own as the Steelers’ defense held deep in its own territory, forcing the Buccaneers to settle for a 24-yard field goal from Barth, making it 7-6 early in the second quarter.

That’s when the Steelers flat-out took over for good.

Third-year pro Rashard Mendenhall, coming off of his first career 1,000-yard rushing season, got the Steelers’ ensuing drive started with a bang, ripping off a 15-yard run off right tackle that featured his trademark spin move in space.

He sure was a sight to behold when he was healthy and at the peak of his powers. He was vastly underrated during his career with the Steelers, even if he’s known more for a miscue in the Super Bowl than his overall career on the field.

Two plays after Mendenhall’s big run, Batch got into the mix on the ground, scrambling for 24 yards up the gut of the Buccaneers’ defense, splitting two defenders in the process while doing his best Big Ben impression on the road.

Batch could really move back then. That was an underrated aspect of his game as a backup quarterback. That scramble then led to a 21-yard strike to Heath Miller over the middle, setting up Mendenhall’s 3-yard touchdown run to make it 14-6 Steelers with 10:26 left in the first half.

With great field position once again, Arians dialed up another deep shot to the end zone for Batch, who again found Wallace for six points, thanks to a fortunate bounce.

Talib had already picked off Batch once and was in great position for a second one. Fortunately for the Steelers, he misplayed the deep shot to Wallace, leading to the football bouncing off of his hands right into the waiting arms of Wallace, who got two feet down in the end zone for the 41-yard touchdown, extending Pittsburgh’s lead to 21-6 7:25 left in the first half.

With a large lead, the Steelers’ defense buckled down again, forcing a quick Tampa Bay punt. From there, the Steelers’ offense under Batch went on a methodical drive late in the first half, putting the Bucs away for good.

Mendenhall opened the drive with a 13-yard run before Batch found Antwaan Randle El for 14 yards and Wallace for 13 yards. Batch then found Ward for 19 yards in front of future Hall of Fame cornerback Ronde Barber, setting up Ward’s 9-yard touchdown catch three plays later over the middle in the back of the end zone for the 28-6 lead with 23 seconds left in the first half.

The Steelers did a great job never letting up in this one on either side of the football.

Coming out of the half, Pittsburgh’s defense forced a three-and-out thanks to a sack by William Gay. Pittsburgh then turned the ball over on downs as Isaac Redman failed to convert a fourth and one, but in the end it didn’t hurt.

After another Buccaneers’ drive stalled and resulted in a punt, the Steelers went right back to work, riding the hot hand of Mendenhall on the ground. The standout running back ripped off a 34-yard run to get the Steelers into scoring position before Pittsburgh settled for a 24-yard field goal from Jeff Reed, making it 31-6 with 2:28 left in the third quarter.

Truly fantastic blocking up front from the Steelers on this run from Mendenhall, and great patience from the third-year running back. He really had serious speed and overall burst with the football in his hands. Again, vastly underrated throughout his career.

With a huge lead in hand, it was the defense’s turn to come up with a massive splash play for the Steelers. Defensive end Brett Keisel was up to the task.

On a failed quick screen to the left from Tampa Bay quarterback Josh Freeman to receiver Sammie Stroughter, Steelers’ outside linebacker James Harrison blew up the play, resulting in a tipped pass to Keisel, who caught it and raced 79 yards to pay dirt following the convoy led by LaMarr Woodley, Ike Taylor and William Gay, making it 38-6 Steelers in a rout.

That will always be one of the best plays to watch from Keisel’s remarkable career as a seventh-round draft pick. What an athlete.

Pittsburgh leaned on Mendenhall down the stretch as the standout back went over 100 yards on the day, but a tipped pass over the middle from Batch intended for Ward resulted in an interception by Tampa Bay’s Quincy Black, setting up the first touchdown allowed all year by the Steelers’ defense, as non other than LeGarrette Blount scored from 1 yard out at the two-minute warning, capping off the scoring in the Steelers’ blowout win.

Against the Buccaneers, Batch attempted just 17 passes, completing 12 of them for 186 yards and three touchdowns, though he did have the two interceptions. Mendenhall finished with 143 yards and a score on 19 carries in the win, while Wallace finished with 100 receiving yards and two touchdowns on three catches.

Defensively, Lawrence Timmons led the Steelers with seven tackles and a sack, while Jason Worilds, Nick Eason, and Gay recorded sacks in the win. Keisel’s 79-yard pick-6 was the lone interception the day for the Steelers.

Sitting at 3-0 on the year after the dominant win over the Buccaneers, Pittsburgh proceeded to finish the 2010 season with a 12-4 record as the Steelers proceeded to go 9-3 once Roethlisberger returned from suspension. Of course, the Steelers won the AFC North, rolled through the playoffs with wins over the Baltimore Ravens and New York Jets, but ultimately lost in Super Bowl XLV to the Green Bay Packers.