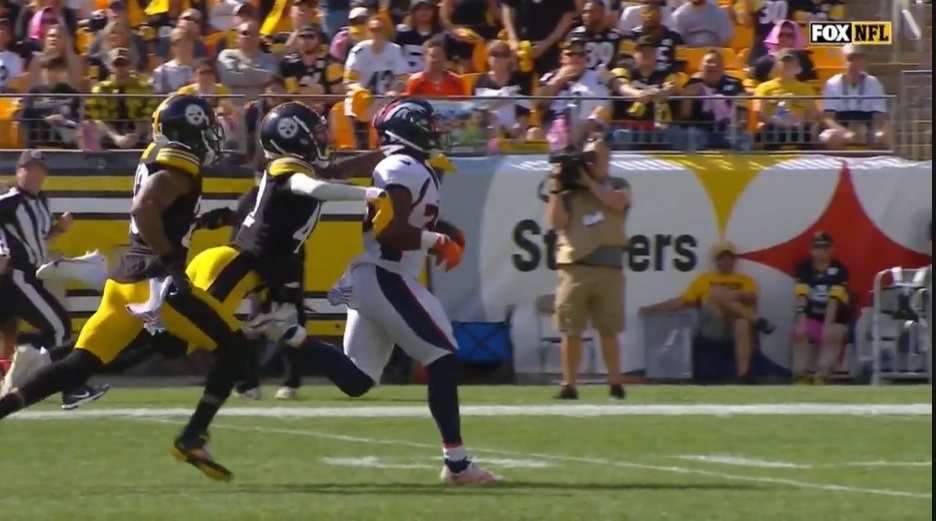 After a strong finish to his 2020 rookie season, former UDFA James Pierre entered a much anticipated sophomore season with hopes that he could work towards becoming a key contributor in sub packages. As a rookie, Pierre stood out on special teams, playing in all 16 games while contributing on multiple special teams units and turning heads as a gunner before eventually gaining some defensive snaps in Dime packages late in the season.

After finishing the 2020 regular season with 10 tackles and a tackle for loss, primarily on special teams, Pierre served as a boundary cornerback in the teams Dime package in a Wildcard Weekend loss to the Cleveland Browns, finishing with a pair of tackles and an impressive pass breakup. In 2021, Pierre turned heads in camp and his playing time increased accordingly, earning snaps in all 17 games while starting four, showing some flashes of brilliance along with inconsistent play which eventually got him benched in favor of Ahkello Witherspoon, who needless to say, wasted no time in seizing the opportunity.

While his relieved of his sub package role and relegated to solely special teams snaps after a Week 12 blowout loss in Cincinnati, Pierre undoubtedly showed growth as a second year player, finishing the season with 47 tackles, three forced fumbles, four passes defended, and a game sealing, red zone interception to hold off a furious Broncos comeback in Week 5.

Likewise, the subject of our evaluation today is centered around James Pierre’s Week 5 performance against Denver, a game which perfectly shows the flashes of dominance, along with the occasional mental lapses which eventually rendered him unplayable.

Despite a slight frame, at 6’0” 185 pounds, arguably the best trait in James Pierre’s game is his overall physicality and willingness to get involved in the box as a run defender. Below, Pierre follows motion into an overhang position, aligned with outside leverage to a tight stack, quickly recognizing Tim Patrick coming down to seal Terrell Edmunds inside and executing a perfect crack/replace.

As Patrick seals Edmunds inside, Pierre triggers downhill immediately, attacking with outside leverage, breaking down, and forcing Melvin Gordon to stop his feet and cutback inside, where Pierre is able to combine with TJ Watt for a vice tackle to limit the run to a short gain. The crack block is a weapon offensive coordinators will use to generate advantageous matchups for their ball carriers, most often by forcing cornerbacks to make tough open field tackles.

In executing crack/replace situations, it is both important for a cornerback to be willing in their run fill, as well as early in their recognition to trigger downhill, attack with proper leverage, and arrive at the point of contact before the back can turn upfield. Likewise, this is a great rep from Pierre here, combining with TJ Watt to limit what should have been an explosive run on well designed and executed play by the Denver coaching staff.

Back when I was publishing my defensive back report card articles in the 2020 season, where I would evaluate each rostered player in the secondary and their weekly performance, Pierre first caught my eye with his maniacal effort in pursuit of the ball on special teams, a trait which helped make him an impact player as a gunner. Similar to his physicality, Pierre’s effort helped make him great at executing an often underrated assignment of the cornerback position, tracking down explosive runs and preventing them from reaching the end zone.

With the Denver offense working from under center at midfield, Javonte Williams fields a toss and cuts back inside, bursting past a diving tackle attempt from Minkah Fitzpatrick and galloping untouched through the second level of the defense. After matching the receivers release, Pierre disengages and takes off in pursuit of the ball carrier’s back hip, closing rapidly with his long strides and diving to secure the tackle inside of the five yard line.

Although Pierre posted a pedestrian 40 time, clocking a 4.59, he is more of a long strider than a quick burst athlete given his long limbed frame, and he has shown the ability to hawk speedy players once he is able to reach his top speed. In keeping Williams out of the end zone here, Pierre was able to give the Steelers defense a chance to defend a short field, where they kept Denver out of the end zone and forced a short field goal attempt.

Three plays later, after a Devin Bush sack, the Broncos offense was faced with a long third and goal, forced to gain 15 yards to avoid a redzone field goal attempt. Serving as the deep ⅓ defender in a Cover 3 zone assignment, Pierre opens into his crossover run while keying Teddy Bridgewater before diagnosing the screen, planting to trigger downhill, evading a block from Noah Fant in space, and diving low to drop the back after a short four yard gain and force a 4th down field goal attempt.

After his great effort and pursuit kept Williams out of the end zone on an explosive run three plays earlier, Pierre showcased great physicality, coming downhill to provide a physical stick and ensure the Broncos offense is limited to three points on their trip to the red zone. The ability to keep explosive plays out of the end zone and force offense’s to convert from shortened fields is often one of the many marks of defensive success.

Given his lengthy frame, Pierre profiles as a prototype press corner. That being said, he often lacks the discipline to stay square and contest intermediate routes, often opening the gate prematurely and allowing receivers to take advantage of his blind spots.

At the snap, Pierre, aligned in press man coverage in a Cover 1 assignment, Pierre properly aligns with outside leverage, shuffling to match Cortland Sutton’s outside release and opening the gate to carry the receiver vertically. At the top of the route, Sutton smoothly sinks his hips and breaks downhill on a curl route, turning Pierre around and generating plenty of separation for an easy pitch and catch.

While Sutton is an advanced route runner, Pierre must continue to learn to be more patient, key opposing receivers hips, and anticipate breaks in the intermediate area, forcing low percentage deep balls outside of the numbers. That being said, given his lack of elite top end speed and burst, Pierre will need to open the gate early at times and use physicality to match the league’s speedier receivers downfield.

Since acquiring All-Pro safety Minkah Fitzpatrick in 2019, the Steelers have utilized Cover 1 Robber looks to maximize his value, allowing him to come from depth and jump shallow and intermediate targets over the middle of the field. Regardless, with just a four man rush and no help on fade balls, the coverage is susceptible to deep targets outside of the numbers, as Ben Roethlisberger was able to expose throughout his prime.

Below, with the Broncos threatening just past midfield, an area where offense’s will often take shots toward the end zone, Pierre aligns in press man coverage on Courtland Sutton in the Cover 1 Robber scheme. At the snap, Pierre kick slides to match an outside release, engaging an off hand jam and opening to carry the receiver vertically before briefly biting on a hitch-and-go double move.

While Pierre does a solid job of matching the double move, his slight hesitation is enough to allow Sutton to beat him up the sideline, get into a stacked position, and extend for the deep ball touchdown. Although Pierre matches the double move relatively well to stay in phase, he would be best served to use physicality and force Sutton wide to avoid getting stacked and afford himself an opportunity to play the ball.

Arguably the most important skill a defensive back can have, particularly at the highest levels of the game, is a short memory. My favorite aspect of this game from Pierre, after giving up a deep ball touchdown that sparked the Denver comeback, he remained locked in and responded with a pair of game saving plays on the final drive.

With the Broncos once again just past midfield, threatening in “shot territory”, down eight with a chance to tie the game late in the fourth quarter, Pierre is aligned at seven yards depth with outside leverage on the #1 receiver, serving as the flat defender in a Cover 2 assignment. At the snap, Pierre weaves outside with patience to force the receiver toward the sideline, opening into his crossover run and reading the quarterback once the receiver declares vertical.

As he sees Bridgewater pull the pin on a deep ball up the left sideline, Pierre continues to sink with vision on the football, tracking the ball in his crossover run and leaning to squeeze the receiver further into the sideline, leaping off two feet to highpoint the football, and nearly securing a timely interception. While Pierre was certainly kicking himself for squandering the opportunity to secure a game clinching interception that slipped through his mitts, he deserves credit for sinking to eliminate the hole shot, which is traditionally a weak spot in the coverage.

Ultimately, facing third and goal from inside the three yard line with the clock running and under 25 seconds remaining, the Broncos would choose to target none other than James Pierre with the game on the line. With the Steelers in a 2 man buzz look, packing the middle of the field with a pair of defenders, Pierre finds himself in an isolated backside matchup against the Broncos top weapon in Courtland Sutton, who burned him earlier in the quarter.

At the snap, Pierre, understanding his inside help, kick slides to match an inside release, engaging in a two hand jam to force the receiver inside while maintaining his outside leverage. As Sutton stems vertical, Pierre assumes a trail position, staying connected to the back hip and understanding that the back line of the end zone acts as an extra help defender. As Sutton breaks to the back pylon on a corner route, Pierre locates the back hip, undercuts the route, and gets his head around to secure a game clinching interception.

While Pierre was far from perfect in this game, he showed the resiliency, mental toughness, and playmaking ability necessary to succeed as a cornerback at the highest level. While he undoubtedly appeared to lose confidence as the season progressed, which ultimately led to poor play and a disappearance from the lineup, I wouldn’t be too quick to give up on Pierre.

While his struggles tracking of the football downfield, propensity to open the gate prematurely, and lack of top end ball skills certainly need to develop ahead of his third season, Pierre showed flashes of what the front office and coaching staff were so excited about ahead of the season. He enters this years camp with another chance to compete with the likes of Tre Norwood and Damontae Kazee for sub package snaps, potentially his last before being relegated to the role of a career special teamer, a path which I could see him ultimately carving out a long career in given his rare motor and physicality.