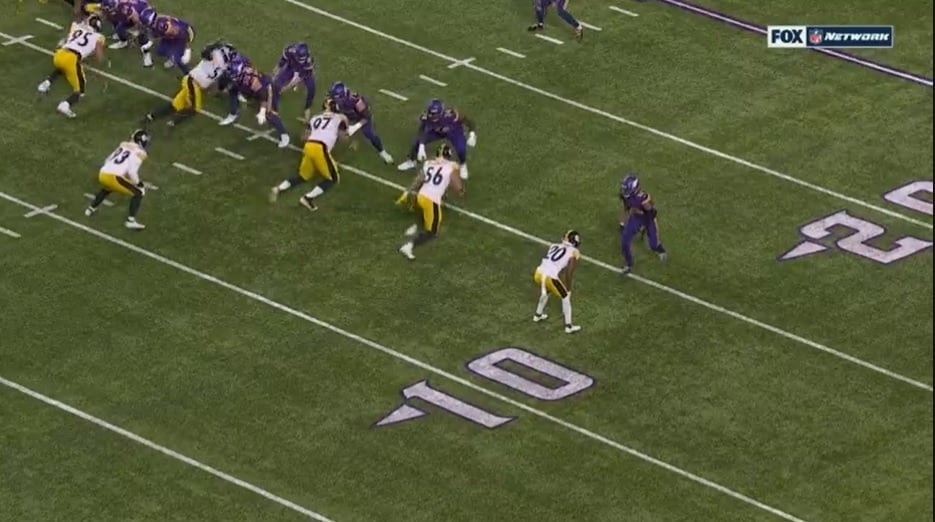 Playing one of the most difficult positions in the game of football at its highest level, there is plenty of volatility in performance throughout a cornerbacks season. Likewise, after looking at one of Cam Sutton’s best career performances in this past seasons Week 1 opener against Buffalo, today, we are taking a look at one of his more inconsistent performances, a Week 14 Thursday Night road contest in Minnesota.

In total, Sutton finished with four tackles and a pass defended in the game while playing every single one of the teams 70 defensive snaps. The advanced stats, on the other hand, tell a much less glowing recap. Just as he did in Buffalo, Sutton allowed five receptions on eight targets. This time however, after allowing just 32 yards on those five receptions against Buffalo, five which came after the catch, he allowed a season high 111 yards on five receptions against Minnesota, allowing 32 after the catch.

He also allowed a pair of touchdowns in the contest, one of which came uncontested in the end zone and the latter of which came on a double explosive play touchdown, one which would ultimately prove to be a backbreaker in the Steelers comeback effort. While he was able to provide tight coverage throughout the game, and did a decent job in limiting the Vikings star receiver, Justin Jefferson, too often, Sutton found himself unable to adequately contest Vikings receivers at the catch point, particularly on possession downs.

As I mentioned earlier, Sutton was tasked with a tough matchup against Justin Jefferson for most of the game, providing tight coverage throughout most of the contest. On the rep below, working in a Cover 1 assignment, aligned with outside leverage to the tight stack, Sutton closes to Jefferson’s upfield shoulder post snap, attempting to cut off the receivers path to the outside and force him to his post safety, Minkah Fitzpatrick.

As Jefferson declares toward the pylon on a corner route, Sutton leans into the receiver, turns to locate the football, and extends to contest the catch point, disrupting the pocket enough to force the incompletion. While you would ideally like to see Sutton stay on top of the route here, he is perfectly in phase, maintains proper leverage, and can only be beaten by a perfect throw and catch.

Sutton’s film study, and understanding of opposing offense’s formational tendencies and snap counts allow him to trigger quickly against wide receiver screen’s, where he consistently makes plays behind the line of scrimmage. As the receiver motions across the formation into the tight bunch stack, Sutton creeps towards the line of scrimmage with outside leverage, loading his weight on his back leg and preparing to trigger downhill.

At the snap, Sutton see’s Kirk Cousins open and declare his shoulders on the screen, triggering downhill immediately, knifing past the kickoff block, and leaving his feet to play the pocket for the pass breakup. While this pass falls harmlessly to the ground, plays like this one can easily cause opportunistic tipped ball interceptions for the Steelers defense. While the play is well designed and drawn up by the Vikings offensive staff, Sutton’s ability to read tendencies, jump the snap count, and arrive in the backfield immediately is enough to blow it up before the ball even reaches the receiver.

The Steelers identity as a single high centric defense which relies heavily on Cover 1 makes mesh a perfect play to scheme against them, allowing receivers room to generate horizontal separation against the Steelers cornerbacks. Below, with the Steelers in Cover 1, Cameron Sutton aligns in press coverage against Justin Jefferson, who is aligned in a cut split as the lone receiver in the Vikings 13 personal set.

At the snap, Sutton patiently gives group before turning to run to the upfield shoulder at Jefferson declares inside. As Jefferson climbs upfield, Sutton is put into a trailing position, causing him to run underneath the crossing route from across the formation, and putting him well out of position to contest an easy touchdown towards the back pylon. While Cousins does a good job of looking off Minkah here, leaving Sutton on an island, I’d tend to prefer off coverage here vs a tight split, which would allow Sutton the ability to read the crossing pattern and stay on top of the route, avoiding being put into trail position.

With the Steelers once again in Cover 1, Sutton is aligned in off man coverage against Justin Jefferson, with the Vikings in 21 personnel. At the snap, Sutton curiously opens into a crossover run and bails with vision on the receiver, taking himself well out of phase to drive and contest Justin Jefferson as he breaks inside on a three step slant route.

After an easy pitch and catch between Jefferson and Kirk Cousins, Jefferson is able to pick up another ten yards after the catch before Sutton is able to track him down and secure the tackle. Particularly with safety help to the inside, Sutton’s decision to bail at the snap here is a curious one, as he has the freedom to play patiently and jump routes knowing that Minkah Fitzpatrick is roaming to clean anything up as the post safety.

With the Vikings once again in 21 personnel, the Steelers come out in what appears to be Cover 6, with Cameron Sutton aligned at five yards depth with outside leverage to K.J. Osborn. At the snap, Sutton opens into a crossover run, closing to Osborn’s near hip, but ultimately allows quick separation as Osborn breaks vertically to the outside.

With his leverage compromised, Sutton identifies that Terrell Edmunds has picked up Osborn and is over the top with proper leverage, allowing Sutton to flip his head around and search for work, essentially becoming a free player. As he turns around, Sutton identifies Justin Jefferson coming open on an over route, driving the top shoulder and arriving to contest the catch point with a violent stick. While Jefferson ultimately makes the catch, reps like this one below showcase both Sutton’s Football IQ as well as his quick processing, which helps him patch holes in blown coverages on the fly.

This time, with the Vikings in 11 personal, Sutton aligns in off man coverage, singled up with the X receiver, Justin Jefferson, opposite of a tight trips bunch. Aligned at seven yards depth with inside leverage, Sutton is keying Kirk Cousins pre snap with his weight loaded on his back foot, preparing himself to trigger downhill vs any quick game read.

At the snap, Sutton identifies Cousins declaring his shoulders for a quick throw, immediately triggering downhill and getting his eyes to Justin Jefferson. Closing space rapidly, Sutton is able to arrive and make a physical leg tackle before Jefferson can turn upfield and make a move, ultimately stopping the screen for no gain. Sutton’s tackling has improved each season and, along with his Football IQ, is becoming a standout trait, making him an adequate defender against opponents perimeter run and screen games.

Despite his high level football IQ, naturally, Sutton’s lack of elite long speed, clocking a 4.52 40 time, which is true to his game speed, Sutton can struggle to contain receivers if put into a trailing position downfield. With the Steelers in the midst of a furious comeback effort late in the second half, Cam Sutton aligns at seven yards depth with outside leverage, serving as a deep third defender in the Steelers Cover 3 scheme.

Responsible with anything vertical between the sideline and near hash, at the snap, Sutton opens into his crossover run, gaining depth to stay on top of K.J. Osborn while closing to the upfield shoulder as the receiver stems toward the hashes. As the Steelers execute the “zombie” check that our Alex Kozora has detailed in the past, in which the post safety cuts the middle third, driving the over route and signaling for the backside corner to replace his post responsibilities, Ahkello Witherspoon is unable to provide Sutton with any vertical support as Osborn stems back toward the sideline on a corner route.

While Sutton does a solid job of staying in the receivers hip pocket, he finds himself in trail position downfield, where a subtle bump from Osborn is enough to send him to the turf en route to an uncontested catch on the triple explosive play touchdown. Understanding the zombie check, Sutton, responsible with anything vertical in his deep third zone, should have worked to stay on top of Osborn while maintaining his outside leverage, prepared to pass a post to Ahkello Witherspoon, which would have kept him from losing his outside leverage and allowing Kirk Cousins room to loft the ball over his shoulder and toward the sideline. Particularly in Cover 3, allowing a receiver to gain vertical separation within your zone is a cardinal sin of the cornerback position at any level, and in this particular case, it essentially closed the door on an impressive Steelers comeback effort.

On the Vikings final drive, with the Steelers needing a stop to get the ball back for their offense, down a score, Sutton once again draws a matchup against K.J. Osborn, this time aligned in press man coverage in a Cover 1 assignment. With the Vikings in shotgun 12 personnel, Sutton aligns head up on the receiver, patiently giving ground with an inch technique at the snap before opening into a crossover run and engaging the receivers upfield shoulder with a nice off hand jam.

While Sutton remains connected through the top of the route, he finds himself off balance as Osborn snaps off on a curl route, creating enough space for the reception, which leaves the Vikings facing a third and short, which they would ultimately convert. While Sutton has great coverage for most of the rep, he needs to understand that if Osborn is putting his weight into his body, he is doing so to break his route in the opposite direction, a staple of route running at any level.

Overall, this was certainly not Sutton’s best game, and quite possibly the worst of his career in his first season as a full time starter. That being said, even in a game in which he struggled mightily, Sutton was able to make his impact felt on multiple occasions through his instincts and physicality, both of which are defining traits of his game.

Entering camp, I would fully expect Sutton to serve as a starter in base this upcoming season, in addition to playing predominantly on the inside in sub packages, where Ahkello Witherspoon and Levi Wallace will play on the boundary. In his second year as a full-time starter, I would expect Sutton to generate more turnovers than he did, with three this past season, as he is instinctual in coverage and has shown solid placement on his peanut punch at times. Regardless, he enters 2022 as the longest standing veteran presence in the Steelers secondary after the departure of Joe Haden, and his leadership and infectious communication will certainly prove important in a youthful secondary.