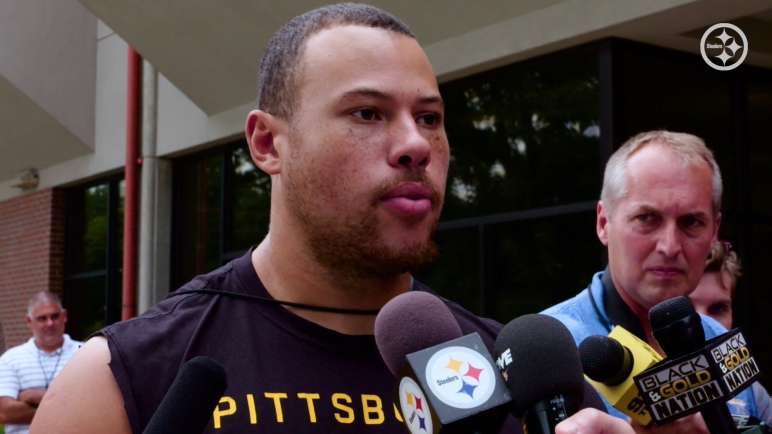 In the final moments of Friday’s practice, according to Steelers Depot’s own Alex Kozora, a serious skirmish broke out on Chuck Noll Field at Saint Vincent College in Latrobe featuring a number of players. Though players are in just helmets and shorts for the moment in the early part of training camp, which is serving as an extension of OTAs and minicamp, things are getting heated for the black and gold.

On Monday, the pads will come on for the first truly physical session of training camp, which has Steelers’ third-year outside linebacker Alex Highsmith excited to get back to the physical element of the game in Latrobe, competing against his teammates in a football-like setting.

Speaking to reporters Friday, according to video via Steelers.com, Highsmith spoke glowingly about putting the pads on and getting after it with his teammates in an effort to compete against each other and make each other better, adding that everyone’s ready to get going in pads and really work towards the 2022 season.

“I’m ready for it. I think we’re all ready for it,” Highsmith said to reporters Friday prior to practice, according to video via Steelers.com. “I think yesterday,  some guys were getting after it, so I think everyone’s ready to put the pads on. It’s gonna be an awesome day on Monday. I can’t wait.”

Highsmith’s comments Friday was a bit of a foreshadow of what was to come in practice Friday, as Kendrick Green and Carlos Davis got into a bit of a scuffle, and then things broke out in a big way at the end of practice as Carlos Davis found himself in the middle of a huge skirmish for the second straight day, leading to head coach Mike Tomlin calling the team together to settle them down at the end of practice.

The players are probably tired of drilling against each other in helmets and want to be physical overall. That will come on Monday, and with it will come an increased level of intensity. For Highsmith, he’s looking forward to getting back the physical aspect of football approaching his third season, allowing him the opportunity to show off his growth and development coming off of his first full season as a starter in 2021.

“Oh, it’s football on Monday. It’s what you do,” Highsmith said to reporters Friday, according to video via Steelers.com. “You know, the physicality changes, physicality turns up a notch, the intensity turns up a notch. And so, like I said, I’m excited to see that first day of pads. It’s always intense, and so I’m really excited to see it. Hoping everything with the weather stays good and everything so we can just have a great day.”

The intensity and the physicality certainly turns up a notch, and that could be a bad sign for the Steelers’ offense, which has looked overwhelmed by a loaded Steelers defense through three days of camp. Once the pads come on and the players are let off of a perceived leash from a physicality standpoint, all bets are off. It’s going to be an exciting day.