Today I wanted to continue evaluating the successful play stat for NFL offenses that many follow, including us here at Steelers Depot. The goal for today is to look at the passing game using the rates many use currently, see how the results stack up to the ultimate goal of winning, and see if tweaking the stat could possibly give us a more predictive and beneficial data point moving forward.

I provided and tracked success rates through the season, so we will start with those measures. Here are successful play rates defined (with spikes, kneel downs, and aborted/penalty plays excluded) from nflfastR: 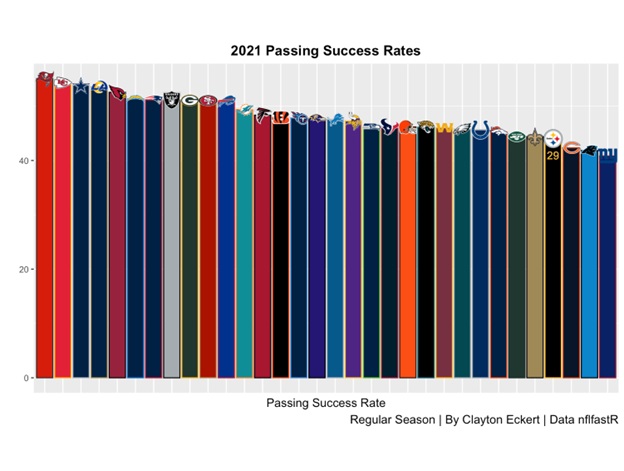 Similar to the last study of total success rates (run and pass plays), the Pittsburgh Steelers ranked 29th in passing success rate in 2021. Out of all playoff teams Pittsburgh had the lowest rank, with the next lowest being the Eagles at 24th. With the NFL being a ‘passing league’, and the similar results for the Steelers in total success rates, this again highlights how big of an outlier they were and the help they needed from other teams to luckily make the playoffs. To further illustrate, let’s look more broadly.

The top five teams made the postseason, followed by the Chargers at the sixth rank. The seventh-11th ranked teams were also playoff participants, with the Dolphins rounding out the top 12. Comparing these ranks to the total success rates, we are left with a slightly lower playoff prediction percentage of 83.3% than the total success rates (91.7% of the top 12 ranks). The following four teams complete the top half of the league in ranks, with the Bengals (14th) and the Titans (15th) making the postseason, and the Falcons (13th, with the lowest win total of seven) and Ravens (16th) missing the cut.

Now to see if tweaks can make the passing success rates better. Let’s see what increasing the first down success rate from 40% of the needed yardage to 50%, considering this sets up the offense for more ideal situations on the remaining downs as opposed to the ‘if you gain four yards on every play’ stance. Let’s call this Adjusted First Down (AFD), leaving the other downs unchanged, and see how this looks in comparison: 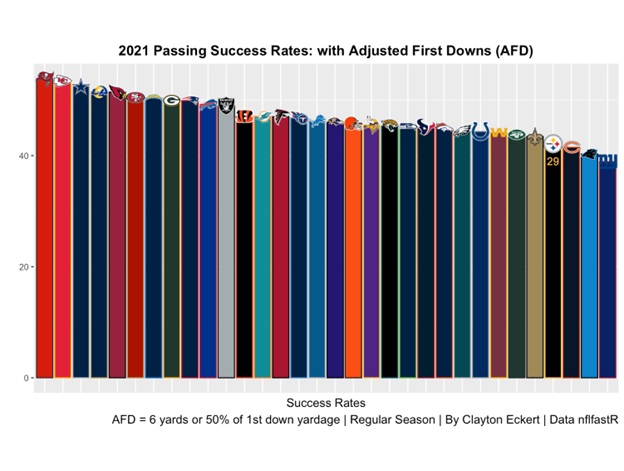 Here we see Pittsburgh at the same rank, with the bottom three teams remaining as well. Looking at the numbers for more context, the Steelers passing success rate on first down was 47.5% (30th) in the initial view and their rate with AFD dropped to 41.9% which lowered to the 31st rank, besting only the Giants. They were also only one of three teams below 50% in the initial view and 42% or below with AFD.

Across the league, 11 of the top 12 ranks (91.7%) were playoff teams, providing a stronger playoff prediction percentage than the initial view. The top five teams remained the same, and the Chargers were the exception again, but were bested by the 49ers who jumped four spots to sixth. The Bengals were the additional postseason team in the top 12, improving from 14th to 12th. Subsequently, the Dolphins (13th) and Falcons (14th) each moved down a spot, with the Lions (15th, but an outlier of only three wins) bumping the Titans (16th) and the Ravens down a rank and placing the latter out of the top half of the league. The Eagles were the other postseason team, remaining at their 24th rank. So, the AFD view for 2021 is definitely an improvement to the initial view considering the above and the strong win totals in the top 12 of nine or more.

Let’s see how adjusting second down as well to at least 60% of the needed yardage, while keeping AFD. I’ll call this Adjusted Early Downs (AED): 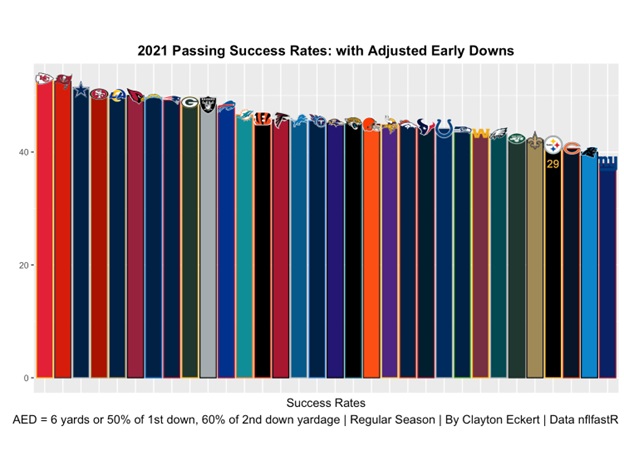 Again, Pittsburgh’s rank remains unchanged (29th) along with the bottom teams remaining the same. Looking at the adjusted second down pass success rates alone, the Steelers had their best results so far with a 48.7% (23rd) success rate in the initial view and 46.2% for a lower 24th rank with AED. The Buccaneers had topped the charts to this point, but with AED the Chiefs claim this accomplishment. The top six ranks were playoff teams like the AFD view, and the Dolphins bested the Bengals (13th) to make the top 12 again, for a lower playoff prediction result (83.3) than with AFD. The top 16 teams also remained the same as the with AFD view, with slightly different ranks (which I’ll illustrate in more depth later). 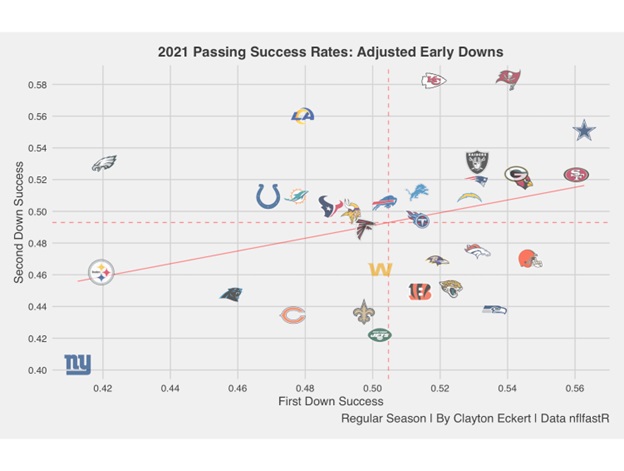 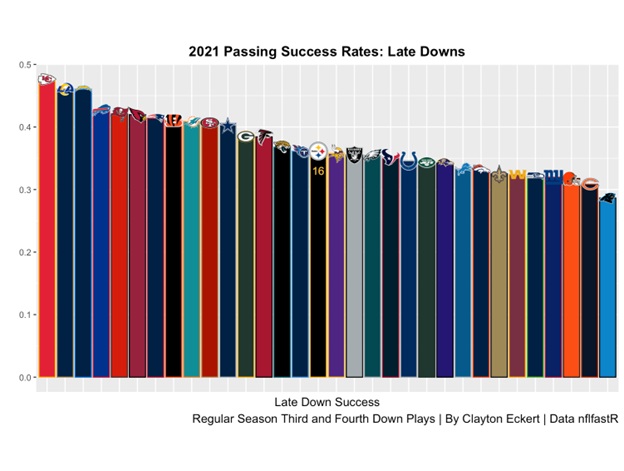 The Chiefs remain at the top spot, excelling on second through fourth down in the passing game. The Rams jumped up to the second spot with similar success, along with the Chargers faring best on first and third down in particular, with a noticeable drop off that follows. Looking at the top 12 ranks as we did in earlier views, ten of them reached the postseason (83.3%), the same result when viewing total success rates. The Bengals landed at 8th, highlighting their greater success in the pass game on late downs. The 49ers were also better passing on late downs (10th), moving into the top 12 unlike their 15th rank in total success. The Titans landed at 15th compared to their 9th rank in total success rates. The Steelers were 16th here, their best ranking in the success rates to this point to round out the top half of the league, besting the Raiders (18th) and Eagles (19th). So, all playoff teams were in the top 20 in passing success rates, but there was more variance in the top ranks than the total success rates.

With the 2021 numbers, AED total success rates seem to be the best predictive measure in my studies, with AFD and especially late down passing being the most important from today as one would expect.

After deep diving into different aspects today, I wanted to provide a table that circles back to passing success ranks of teams on all downs, to see where each team excelled in totality to wrap up (SPRK= Successful Play Rank initial view, AFDRK = with ADF rank, AEDRK = with AED rank, OVRRK = average of SPRK, AFDRK, and AEDRK with wins breaking any tiebreakers and stars = playoff teams): 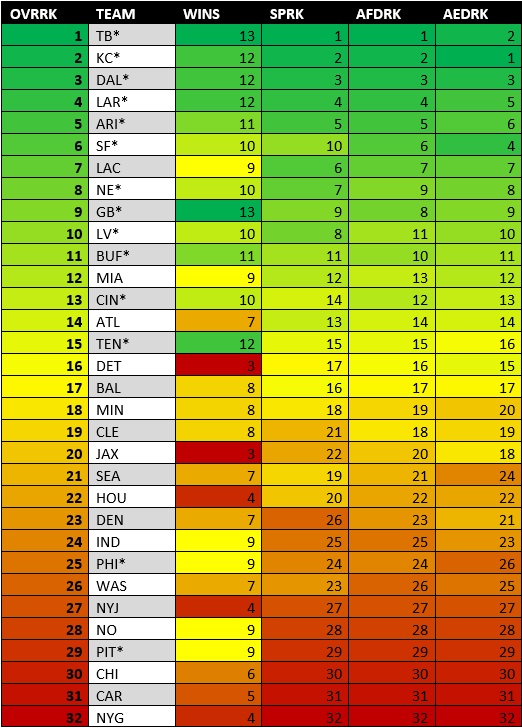 The Buccaneers held the top spot in the passing game in the initial view and with AFD, with the Chiefs claiming that spot with AED. Dallas ranked third across the board, and the Super Bowl Champion Rams landed top five throughout with the fourth OVRRK. The Cardinals round out the top five in OVRRK and had fifth and sixth ranks in the different views. The 49ers ranks are interesting, moving up steadily in the adjusted views into the top five and holding the tiebreaker in wins over the Chargers. The Patriots landed at eighth faring best in the initial view, followed by the Packers with their best mark with AFD, very important considering their tie for highest win total of 13 with the Bucs. The Raiders round out the top 10 with the initial view their best mark. The Bills best mark was AFD, and the Dolphins round out the top 12.

Only two teams in this range missed the postseason, but each had the requisite wins to get there. The Bengals (13th) and Titans (15th) were the remaining playoff teams in the top half of the league (12 total), emphasizing a stronger playoff correlation than the total success rates in this regard (which had 10 total). The passing success rates had an extreme outlier in the Lions, lacking wins (three) that the total success rates did not (lowest win total in the top half of the league was seven).

This will be interesting to track further, and especially interested in layering other predictive measures since one stat never tells the whole story (but I’m working on it, lol). The best singular stat to predicting Super Bowl winners in my opinion is a personal and Steelers Depot favorite: Adjusted Net Yards Per Pass Attempt that I love to track. I plan to also dive into rushing success rates to see if there are any valuable takeaways, and also tackling the TOX stat (turnovers and explosive plays) with a similar goal to see if adjusting the numbers/layering missing elements can provide stronger prediction tools that can be layered together moving forward.