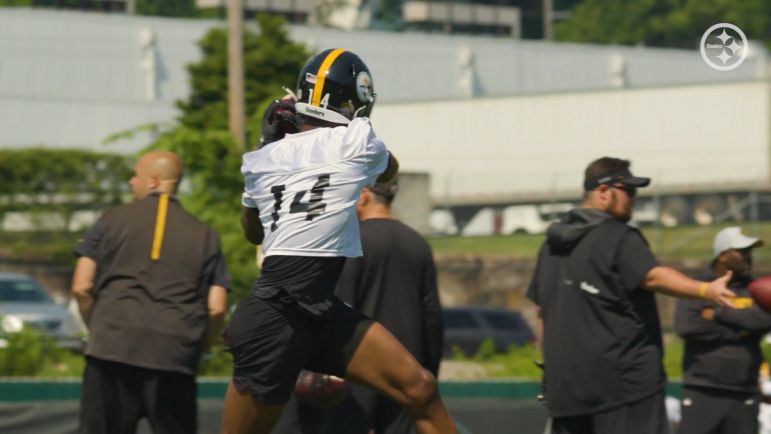 Normally choosing the Pittsburgh Steelers’ best offseason moves is like an eye test. Which is better – one or two? There weren’t a lot of choices.

But 2022 has been different. It’s been the team’s busiest offseason they’ve ever had. A new quarterback(s). A new general manager. Their most aggressive free agency. Pro Football Focus named the best singular offseason moves for each team and landed on Pittsburgh’s tried and true method, the draft, as where the Steelers made their best choice.

“No team has done a better job over the last two decades of finding wide receiver talent outside of the first round, developing these players into upper echelon contributors on their rookie contracts and most often letting them walk in free agency as they rinse and repeat.

It’s possible the Steelers and wide receiver Diontae Johnson find common ground on a multi-year extension either before the 2022 campaign or after the season, but Pittsburgh has no reason to pay an amount they’re not comfortable with.”

Pittsburgh certainly has a reliable track record when it comes to the position drafting names like Mike Wallace, Emmanuel Sanders, Antonio Brown, JuJu Smith-Schuster, Diontae Johnson, and Chase Claypool over the years, all serious hits for the team. Pickens hopes to be next in line and was tremendous second round value, a first round talent who fell due to a 2021 ACL tear and potential maturity concerns. When healthy, he starred in the Bulldogs’ offense, bursting on scene with a 49/727/8 freshman season back in 2019. On tape, he shows surprising fluidity for his lanky frame with strong, reliable hands, great body control, and a willingness to block.

As Spielberger notes, Pickens will be next man up in 2023 if Diontae Johnson is playing elsewhere. It’s still unknown if a contract extension will get done this summer, but a hot receiver market reduces the odds of a deal. Pickens has the ability to be the team’s next X receiver and next top weapon in this offense. Pickens may face a larger-than-anticipated learning curve, but the talent and potential are all there. He’ll also have to hope for good quarterback play. As Kevin Colbert was always quick to mention, having a Hall of Fame quarterback like Ben Roethlisberger helped make those receivers look good.

Personally, I would’ve chosen the signing of OG James Daniels. Someone who can be the anchor of the Steelers’ line and instantly became their best offensive lineman. Even his contract was reasonable and he’s more proven and will make more of an immediate impact than Pickens.

PFF wrapped up their analysis but highlighting the young weapons Pittsburgh’s offense has. Pickens and fellow fourth round pick WR Calvin Austin III, Chase Claypool, Pat Freiermuth, and Najee Harris. They have the potential to become a potent group and are good reminders why criticism over the Steelers “not spending money” on their offense is silly.