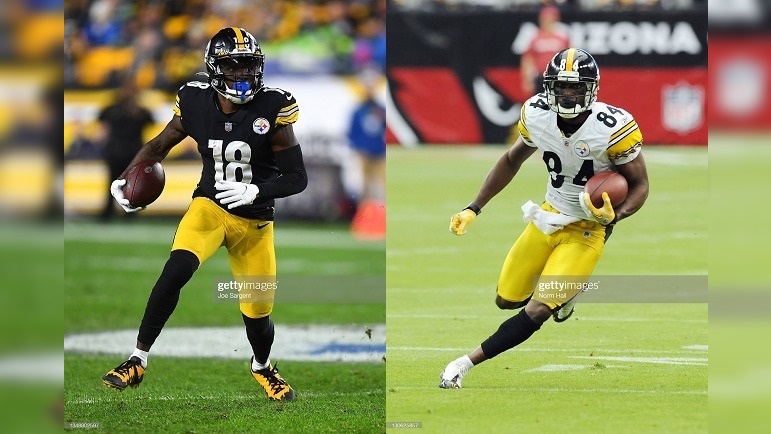 With the start of the Pittsburgh Steelers 2022 training camp still three weeks away, there continues to be quite a bit of talk about whether or not the team will ultimately sign wide receiver Diontae Johnson to a lucrative contract extension prior to Week 1 of the regular season. In some discussions I’ve seen about Johnson’s potential contractual situation, former Steelers wide receiver Antonio Brown is sometimes used as a past example as to past instances when the team gave a lucrative contract extension to a player at his position entering the final year of his rookie deal. While the Steelers did indeed sign Brown to a five-year, $41.96 million contract extension back in July of 2012, I think a lot of people forget a lot of details from that transaction.

For starters, when Brown signed his five-year, $41.96 million contract extension back in July of 2012, he was just in his third NFL season. Additionally, 2012 was originally scheduled to be the final year of his rookie contract as this was prior to the 2011 CBA agreement. At the time, Brown was scheduled to earn just $540,000 in 2012 prior to him signing his extension. Had he not signed that extension, Brown would have faced a max restricted tender in 2013 in the amount of $2.879 million. In short, Brown had a cap earning potentially from 2012-2013 of just $3.419 million, and that’s only if the Steelers wound up issuing him a first-round restricted tender in 2013. The Steelers essentially had Brown trapped in a nice spot when they offered him that extension. How does what I wrote differ from Johnson’s current situation? Well, Johnson, at worst, faces the franchise tag from the Steelers in 2023, and that amount currently figures to be right around $20 million.

Next, let’s remember that when Brown signed his extension back in 2012, he agreed to five more years on top of his 2012 season. Additionally, Brown received an $8.5 million signing bonus as part of that contract extension and that was the only money fully guaranteed. If you need the math done, just 20.3% of his deal was fully guaranteed, and that’s just the way the Steelers liked to do business at the time. So, not only did they lock Brown up for five additional years with that contract extension, but they also did so with a very low guaranteed money percentage.

Now, a lot of people might think that Brown’s new money average as a result of that 2012 contract extension was huge money for a wide receiver at that time. However, as old records from Over the Cap that I have saved indicate, Brown’s 2012 contract extension resulted in him being just the 13th-highest-paid wide receiver at the time. That wasn’t anything to sneeze at in 2012, mind you, but let’s make it clear that he wasn’t in the top 10 after signing that deal. On top of everything else, Brown could have easily been cut after the 2013 season and the team would have even saved $2.6 million in 2014 salary cap space in doing so. In summation, Brown’s 2012 contract extension was slanted heavily in the Steelers’ favor, and the wide receiver gained all of $8.5 million that year by agreeing to it. Times were much different nearly 10 years ago.

Fast forward to Johnson and a possible contract extension for him this summer. If the Steelers were to strike a deal with him this summer that resulted in him being the 13th-highest-paid wide receiver in the NFL, such a new money average would need to fall between $19.250 million and $19,882,353. That’s just slightly lower than what the wide receiver franchise tag is expected to be in 2023. Additionally, there’s no way that Johnson would agree to a five-year extension like Brown did. The max would likely be four additional years. Oh, and then there is the fully guaranteed money discussion. There’s no way that Johnson would agree to any extension that only includes the signing bonus being fully guaranteed. Realistically, he is looking for around the first two years of a new extension to be fully guaranteed. Why wouldn’t he be with the way the wide receiver market has exploded?

In closing, we’ll have to wait and see how things ultimately play out with Johnson this summer. In the meantime, however, let it be known that his situation this year is quite different than the one the Steelers went through nearly a decade ago with Brown. The Steelers simply don’t have Johnson in the same rock-and-a-hard-place situation that they had Brown in back in 2012.