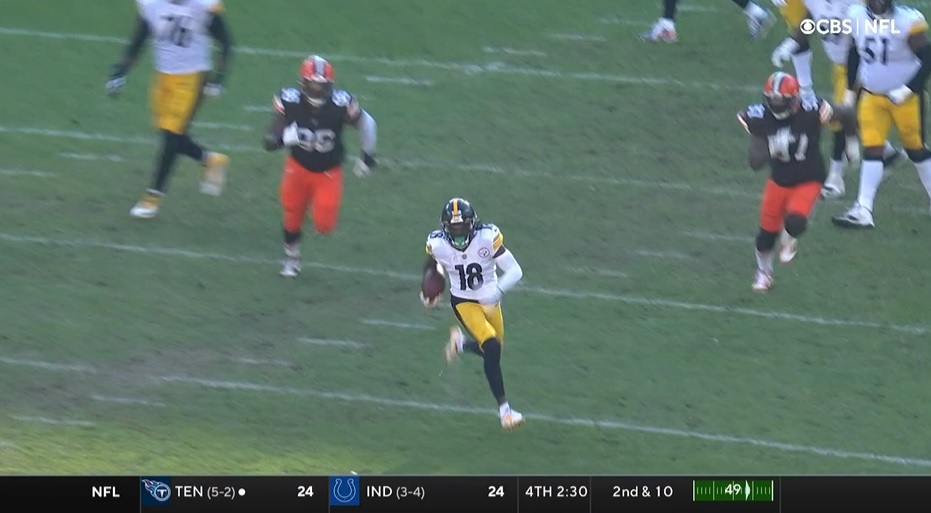 Madden 23 is (slowly) unveiling their ratings for their upcoming game, set to be released next month. Today, they released ratings for each team’s wide receivers and tight ends. Unsurprisingly, WR Diontae Johnson scored the highest rating on the Steelers at 85 overall. His overall is up four points from a year ago.

Here’s how the ratings look for each position group:

The only offensive player who may have a higher rating than Johnson is Najee Harris. Harris was a 76 overall to start last season and should at least be in the mid-80s this time around. Last year’s highest offensive player was WR JuJu Smith-Schuster at an 84 overall meaning Johnson has already surpassed that mark. TJ Watt was the team’s highest overall player at 94.

Predictably, Johnson and Claypool are the team’s top two wideouts with Pickens tied with Miller for third place. Austin’s rating is a little low overall though his is not, a 95 overall mark. So you’ll be able to throw deep in Madden 23 even if the Pittsburgh Steelers struggled to do it in real life. Pickens has the sixth-highest rating of any rookie receiver.

Madden certainly did Zach Gentry dirty, somehow giving him a worse overall than Jace Sternberger, whose career has gone up in smoke. Other curiosities of the ratings include Diontae Johnson having a better catching rating than anyone else, including Pat Freiermuth, edging him out 91 to 89. Johnson also comes away with the top agility score and ties Miller for the highest awareness rating, a crucial stat in the game.

Beyond that, there weren’t a ton of other surprises. Evidently, gone are the days where Madden released all their ratings at once, making for a nice and tidy post for us to write about. They’ll milk every minute of the ratings they can. We’ll update you when the rest are released.

Here’s a list of the top ten receivers with Davante Adams earning a 99 overall rating for a second-straight year.

And here’s the top 15 tight ends with Freiermuth just missing the cut.