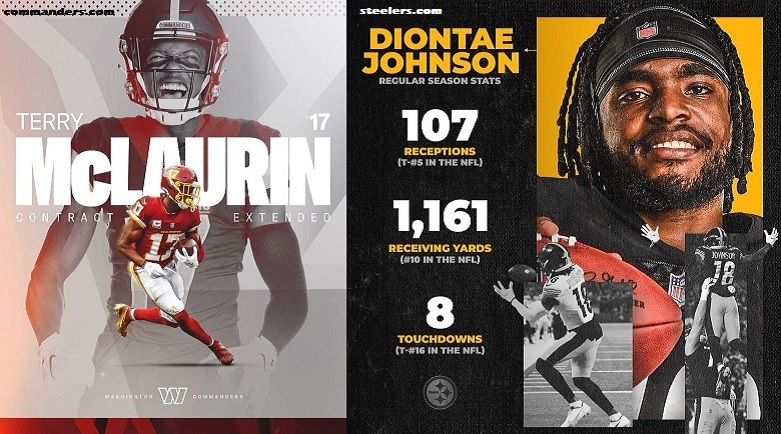 The Washington Commanders recently signed wide receiver Terry McLaurin to a contract extension and with there still being a lot of speculation surrounding Pittsburgh Steelers wide receiver Diontae Johnson possibly signing a new deal later this summer, let’s use this slow Saturday to dive deeper into the numbers of the most recent contract signed by the Ohio State product.

For starters, let the record show that McLaurin was previously scheduled to earn $2,954,118 in 2022 as part of him qualifying for a Proven Performance Escalator in addition to an 18th game check. Additionally, the Commanders added an extra voidable year to the extension in 2026 to help accommodate the signing bonus proration so that his salary cap charges by year would be a little lower.

Below are the by-year new contract numbers and details for McLaurin, per Florio’s post:

8. The contract includes a voidable year in 2026, spreading the signing bonus over five years instead of four,

10. The guaranteed per-game roster bonuses and workout bonuses must still be achieved to be earned.

Below is what McLaurin’s deal looks like laid out in a table along with cap charges, yearly cash flow and new money cash flow by year:

Now let’s look at some specifics related to the extension:

According to Florio’s report, it looks like McLaurin has the potential to earn another $1 million through escalator incentives as part of his new deal. That’s not reflected in the table above.

The new money total for McLaurin in his deal is $69.6 million and that makes his new money average $23.2 million. He is now the NFL’s seventh-highest paid wide receiver as a result of his new deal.

Circling this back to Johnson, as you can see by the stats comparison from StatHead to McLaurin below, he’s absolutely going to want a new deal that resembles the one outlined above. Johnson’s drops and yards per reception stats are the two biggest differences and that could be used against him in attempting to get a deal that looks exactly like McLaurin’s.

As a result of the McLaurin deal, Carolina Panthers wide receiver D.J. Moore is now the NFL’s eighth highest paid wide receiver with a new money average of $20.628 million. That deal was signed back in the middle of March. Below is a stats comparison for Moore and Johnson from the last three seasons only.

Johnson, like McLaurin before he signed his new deal, is currently scheduled to earn $2,954,118, once the extra game check is factored in. He could potentially be facing the franchise tag in 2023 as well and that means his earnings the next two seasons could be capped at roughly $22,954,118. Splitting the new money averages between McLaurin and Moore results in a number of $21.914 million. If we’re being realistic here, that $21.914 million might be the best appraisal value when it comes to Johnson. Such an extension would have him in the top 10 highest paid wide receivers in the NFL.

Now, whether or not the Steelers value Johnson at that amount is another story. Additionally, Johnson is sure to want the first two years of a new deal fully guaranteed and that could be problematic as well. As part of such a new money deal of $21.914 million for Johnson, it would likely take a signing bonus in the neighborhood of $24 million and a 2022 cash flow total of around $25.5 million. If the extension were for four years on top of 2022 (even if a voidable year needs to be used), Johnson’s new cap charge for this season would likely be right around $6.6 million. His current cap charge is $3,040,805, so it would increase roughly $3.5 million or so. It’s certainly doable from a cap perspective and that’s never been part of the issue. It would probably take around $31 million fully guaranteed, the first two years (2022-2023) to get the deal done as well.

All offseason my gut has told me that the Steelers won’t sign Johnson to an extension. My gut aside, however, an extension for Johnson is certainly plausible and especially if his new money average demands don’t exceed $22 million. In short, if Johnson does sign an extension prior to Week 1, it’s likely going to look similar to the one McLaurin just signed and possibly just short of it.

Should Johnson not get a new deal by Week 1 and he balls out in 2022, he’s obviously not going to be very happy if the franchise tag is slapped on him. That’s a post for another day.