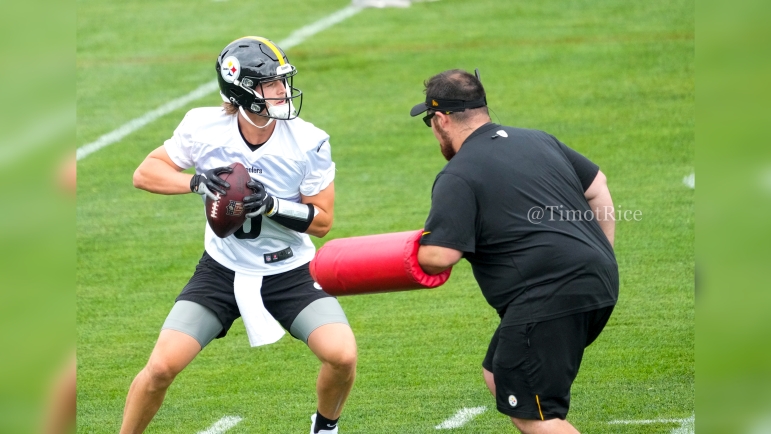 The first three days of his first-ever NFL training camp with the Pittsburgh Steelers at Saint Vincent College in Latrobe has not been kind to first-round quarterback Kenny Pickett.

Working with the third-string offensive line and playmakers certainly hasn’t helped, but overall Pickett has had his fair share of struggles to open training camp. Those should have been expected overall, so it’s no surprise that Pickett remains the third man in the three-way quarterback competition featuring Mitch Trubisky and Mason Rudolph for the black and gold.

Though he’s had some struggles and thrown a pair of interceptions and lost a fumble, the future is still rather bright for Pickett. While second-year offensive coordinator Matt Canada continues to focus on the day-to-day play of his quarterbacks, not getting too high or too low, he’s still seeing some impressive stuff overall from Pickett, especially from a leadership standpoint.

Speaking with 93.7 The Fan’s Jeff Hathorn Friday, Canada praised the “super talented” Pickett for his desire to learn and his overall leadership skills, even as the current third-string quarterback for the Steelers behind two veterans.

“Super talented, super great guy, ultra competitive. I’ve enjoyed him since he was whatever, say 17, 18 years old when I was recruiting him,” Canada said to Hathhorn, according to audio via 93.7 The Fan. “Everything about him is great. You know, he has good plays and bad plays, just like Mitch [Trubisky] and Mason [Rudolph] have. But I do think his desire to learn, his leadership skills or how he does it is a little bit different than the other two. And again, all three of them do a very good job with him as you can sit back and watch. It’s fun to see. So even as a rookie, he has his way of getting with guys. And I think, again, the players have responded to him and enjoy being around him.”

While none of Canada’s comments regarding his star pupil in Pickett comes as a surprise, it’s great to hear some positivity about Pickett overall, especially after a slow start to training camp overall with limited reps while being third on the depth chart.

Pickett has always been a talented, ultra-competitive quarterback, which helped him ascend into stardom last season with the University of Pittsburgh, eventually leading to him becoming the first quarterback off the board in the first round to the Steelers, who share the same facility with the Panthers.

Though he’s had time to adjust to the Steelers, the playbook and his teammates during OTAs and minicamp, training camp is a full-on learning experience for Pickett overall, especially behind guys like Trubisky and Rudolph. While trying to fully grasp the playbook, Pickett is also being looked to as a leader by the young guys on the roster he’s working with on the third team in camp. That’s testing his leadership skills overall, helping him find his voice within the locker room.

Hopefully in the ensuing days, Pickett can settle in nicely and show everyone just how talented and ultra competitive he is in the camp setting, making a push for the starting job for the black and gold.