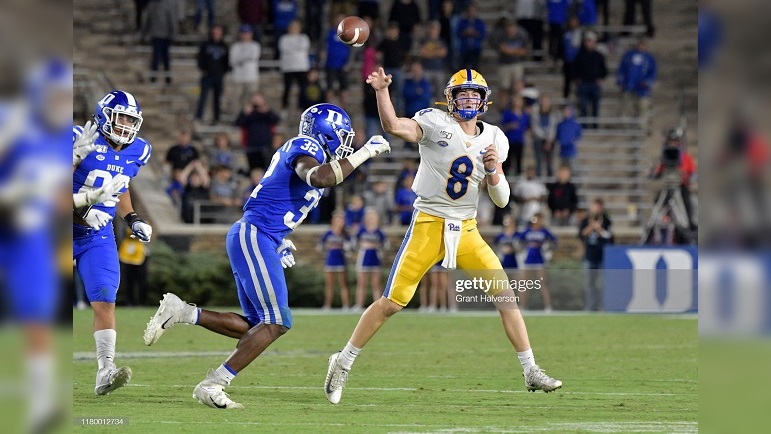 Kenny Pickett’s played in cold weather all his life. Growing up in New Jersey to playing for the Pitt Panthers the last five years. But make no mistake. Winter isn’t his favorite season. In a sneak peek of a boating trip conversation Pickett had with Aditi Kinkhabwala on CBS Sports’ We Need To Talk, Pickett admits he doesn’t like when the temperature drops.

A post shared by We Need To Talk (@weneedtotalk)

“I will never do that. I don’t like the cold,” Pickett said when asked by Kinkhabwala if, given his love of fishing, he’d ever try ice fishing.

Of course, Pickett is used to playing in the cold. He’s not some So Cal surfer dude who’s never been outside when the temperature started with a “2.” Surprisingly though, Pickett didn’t play in many frigid games last season with temperatures largely in the 50s. A game against Syracuse was played indoors, too.

He did shine in a November 2020 win over Virginia Tech, throwing for 404 yards and two touchdowns on a 46-degree day with wind and rain. In November of 2019, he beat the Tar Heels on a 36-degree day, throwing for over 350 yards and a score with no interceptions. He did, however, struggle in cold conditions the next two weeks, a shutout loss against Virginia Tech followed by a one-score defeat against Boston College. During the pre-draft process, some scouts questioned his ability to play in the cold given his small hands.

Still, like it or not, Pickett has experience doing it.

“It doesn’t mean I have to like it. I just know I played in just about everything you could play in.”

Playing for the Steelers, there’s no escaping the cold. It’ll only be colder in the NFL as the regular season stretches all the way into the first week of January. A playoff run puts you even further into the winter calendar. And depending on how the season goes, Pickett’s first NFL snaps may come around Christmas time. So he better pack the extra handwarmers.