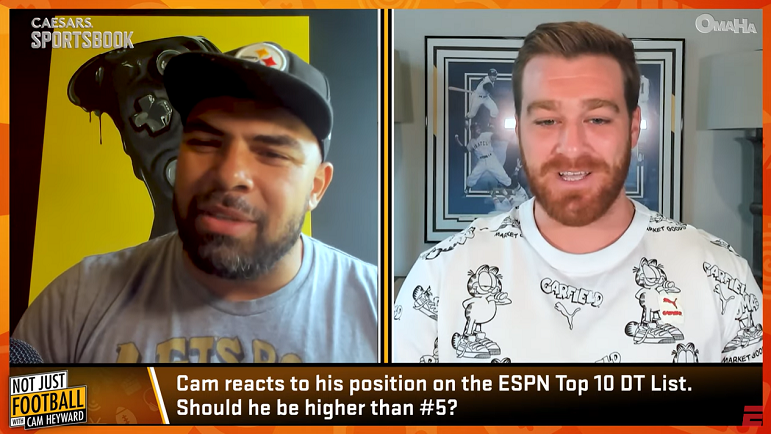 The highest placement Heyward had in the survey — which had more than 50 league executives, coaches, scouts and players to help ESPN stack the top 10 players at 11 different positions, from edge rusher to interior offensive lineman — was third overall. The lowest Heyward was ranked was shockingly out of the top 10.

Here's Cam Heyward using the LG to tackle the RB.

This is an insane rep. pic.twitter.com/NijJLgn58s

“Jeremy Fowler, I’ve loved talking to you over the years, but damn, this is wrong,” Heyward said on his podcast, which dropped Wednesday night, according to video via the NFL on ESPN YouTube page. “I’ve even talked to Hayden [Walsh, Heyward’s co-host] before this, and I asked can we look up the 2021 rankings. That’s the confusing part.”

Throughout this offseason, Heyward has consistently ranked No. 2 behind Donald in the positional rankings. Yet on Wednesday morning, ESPN’s survey results had the Steelers’ face of the franchise behind Donald, Tennessee Titans’ defensive lineman Jeffrey Simmons, Jones, and Buckner.

“I could understand the ranking ahead of the 2021 season, but then we move into the next season. You say I had one of my best seasons ever,” Heyward said, according to video via the NFL on ESPN YouTube page. “Let me just say this: I appreciate my peers, I appreciate the great players I get to play with. I got to meet a lot of these guys at the Pro Bowl, and they’re really great players. But dang!

“I just came off of heck of a year, and I went back? That seems very confusing to me.”

It is certainly confusing, especially considering the dominance Heyward displayed last season at age 33, putting together one of the most complete seasons of his career, which — make no mistake — is on a Hall of Fame trajectory.

Somone like Simmons, who wasn’t even in the top 10 last season in the positional rankings survey from ESPN, all of a sudden jumping Heyward based on one good year is shocking. As Heyward said opening the segment on his podcast, it’s just wrong. Point, blank, period.

Simmons, Jones and Buckner are all great in their own right, but none are as productive or disruptive as Heyward is on a weekly basis. It’s not just as an interior pass rusher either. According to Pro Football Focus, Heyward graded out at an 89.8 (elite) as a run defender in 2021, adding to his 85.8 pass rush grade, good for an elite-level grade of 91.0 at the position, grading out as the No. 2 interior defender behind Donald in PFF’s metrics.

For comparison’s sake, Jones placed fifth last season in PFF’s grades, while Simmons was 21st and Buckner was 22nd.

In the end, positional rankings are mostly meaningless fodder for the offseason, but the slight from ESPN certainly put another chip on Heyward’s shoulder ahead of the 2022 season, a season in which he truly becomes the face of the franchise.

“For me personally, I think I’m at the top of my game and I’m a complete player and that’s not a slight on everybody else,” Heyward added. “But when I step on that field, I feel like I’m the top guy in my position. Aaron Donald is a great player and he is a heck of a player, but it’s what you want. It’s pick your poison. I’ve said that to multiple people this offseason, and that’s how I feel. AD [Donald] does a great job rushing the passer and he can play the run. I play differently, and I do the same things. I just think, for some reason, they think 3-4 d-end that I shouldn’t get the credit. And as I get older I feel like I have to start saying this more because the time is running out and I feel like I’m doing a really good job in my position that I don’t think it should be, you know, shadowed.

“I shouldn’t have to hear the remarks that, you know, it’s AD and everybody else. Man, screw that,” Heyward added. “I worked too hard at this game through for someone to — excuse my language — shit on my game. What are we talking about?”

Watching Cam Heyward dominate is always a joy to watch.

Perfect leverage, excellent strength & then gets off the block to deny this 3rd and short. pic.twitter.com/sEQMiLOyGh

It’s great that Heyward now has his own media platform to give his real, unfiltered thoughts on football, how it’s covered, and how he’s perceived through the media.

There is no doubt that it’s Aaron Donald and Cameron Heyward at the top of the food chain at the defensive tackle position. Both are exceptional pass rushers and run stoppers. As Heyward said, pick your poison on the type of player you want, it doesn’t matter between those two. That’s why it was so shocking to see Heyward at No. 5 in ESPN’s survey coming off of an exceptionally dominant season.

All ESPN did was add more motivation for Heyward, who knows he had work to do still to gain that respect he’s so deserving of.

They be sleeping… always trying to put down my game. Got more work to do!!