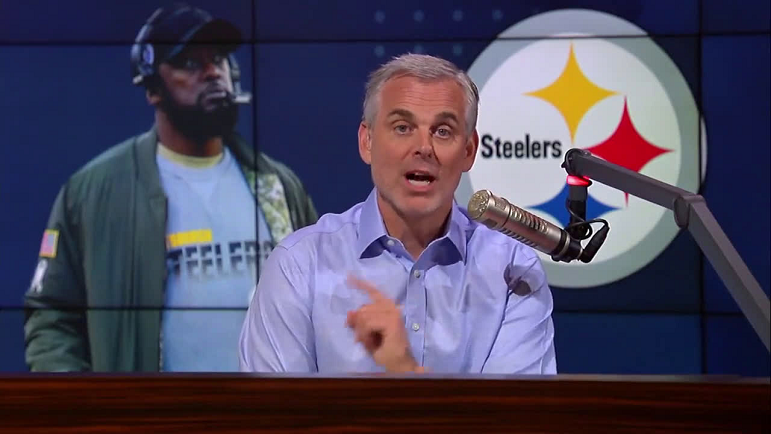 Fox Sports Radio media personality Colin Cowherd sure knows how to get a rise out of the fanbase of the Pittsburgh Steelers.

Historically, he’s pushed the right buttons during his time on the radio, saying just enough to send the fanbase into a tailspin as they try and defend their beloved black and gold over and over again.

Thursday, Cowherd pushed the right buttons once again, even calling out the fanbase some, during a segment on The Herd with Colin Cowherd. In that segment, Cowherd stated that while he feels the same way about the Steelers every year under Mike Tomlin, the fanbase demands that the media respects the black and gold like its the 1970s, when in reality the Steelers haven’t defeated top quarterbacks in the playoffs since the loss in Super Bowl XLV to the Green Bay Packers.

"The Pittsburgh Steelers fanbase is interesting. Sometimes I think they live in a time warp. I feel the exact same way about them every single year until Mike Tomlin."

While Cowherd certainly wasn’t wrong in his diatribe against the Steelers and the fanbase, the truth of the whole thing was rather shocking overall.

“The Pittsburgh Steelers fan base is quite interesting. Sometimes I think they live in a time warp,” Cowherd said, according to video via The Herd’s twitter page. “I feel the exact same way about the Steelers every single year with Mike Tomlin. They’ll be pretty good, but not buttoned up enough to win a Super Bowl. They’re pretty good. Always have good players, always have a good structure…they draft well, they organize well, they develop well, they teach well. Oh well, they’re nine, seven and one. They have not won a playoff game in six years. They have not beaten an elite quarterback in a playoff game in 12 years, and by elite I’m saying Joe Flacco.”

Cowherd goes all the way back to 2010 when the Steelers beat the Baltimore Ravens in the Divisional Round that season, then beat Mark Sanchez and the New York Jets to reach Super Bowl XLV, where they lost to Aaron Rodgers and the Green Bay Packers. Since that season, the Steelers have reached the playoffs seven times, winning just three playoff games.

In that span, the quarterbacks they’ve beaten in the postseason include Cincinnati’s A.J. McCarron, Miami’s Matt Moore, and Kansas City’s Alex Smith. That’s three playoff wins in seven trips to the postseason since the 2010 season, two of which came in the same postseason in the 2016 season.

Aside from the wins in the playoffs, the Steelers have also struggled to beat average quarterbacks, let alone elite ones. Playoff losses in that span came to Denver’s Tim Tebow, Jacksonville’s Blake Bortles, and Cleveland’s Baker Mayfield, as well as guys like Denver’s Peyton Manning, Kansas City’s Patrick Mahomes, and New England’s Tom Brady, to name a few elite ones.

“Steeler fans, however, demand that you respect them like it’s the seventies,” Cowherd added. “Since the Steelers loss in the Super Bowl to Green Bay — that was a long time ago — they have one playoff win over a starting quarterback. I’m not in Pittsburgh regularly, but do they still think Eddie Murphy is the top billing comedian? And are they quoting like Back to the Future quotes? I don’t understand it. You can’t demand 1970s respect and Big Ben’s best year respect when I’ve been watching this thing for the last like eight years, 10 years. You do not beat star quarterbacks in playoff games. You don’t beat starting quarterbacks in playoff games.

Cowherd often has unique takes overall, and this is one of those. While he credits the Steelers for being pretty good, giving them the respect they deserve overall for the last decade or so, it’s spot-on that the Steelers likely don’t have what it takes to win a Super Bowl this year.

That said, they are consistent overall, like Cowherd points out, under Tomlin. The Steelers will draft well, they’ll develop and teach well, and they’ll be in the thick of things overall. But they just haven’t been able to get over the hump in the postseason against top-notch quarterbacks. It’s okay to acknowledge that truth.

However, it seems to be a bit much to discredit the Steelers and their three wins in the playoffs in the last 12 seasons because they came against less-than-ideal quarterbacks in McCarron, Moore and Smith. You have to play who’s in front of you on the schedule and take care of business in those matchups, and that’s what the Steelers did.

Of course, this isn’t the same Steelers’ franchise from the 1970s, one stacked with Hall of Fame talent that won big consistently year after year. It’s perfectly fine to give them the credit they deserve though each season for being a consistent, stable franchise, one that is going to win a bunch of games and be in the playoff picture year after year in an ever-changing league overall.

Based on the changes the Steelers underwent this offseason, they’d probably take “pretty good” in 2022, at least as a starting point.