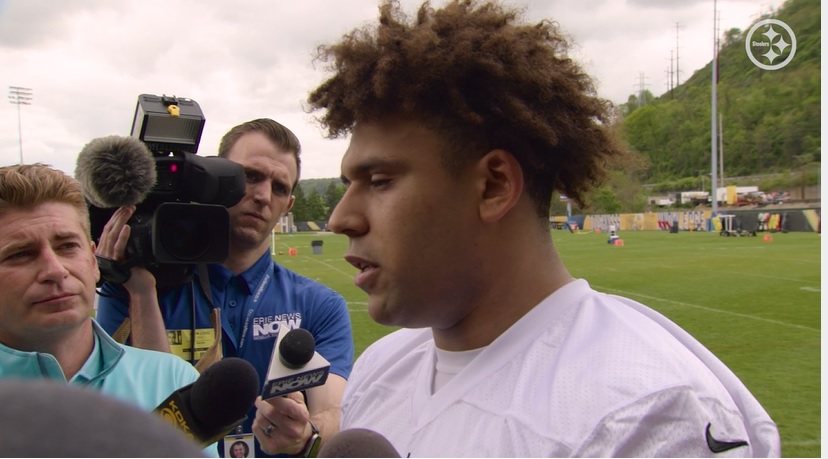 Connor Heyward may be listed as a tight end but to make the Pittsburgh Steelers’ roster, the coach he’ll have to impress is Special Teams Coordinator Danny Smith. Heyward’s path to the team is the same as most late round and undrafted players, cutting their teeth on football’s third phase. Heyward recently spoke with Steelers.com’s Teresa Varley and explained what it’s like playing for him.

“He’s really intense. Real hands on,” Heyward told Varley. “You have to love that in a coach. He makes it fun. Also, after practice in the spring, getting extra work because he knows it’s not going to happen overnight. It’s going to be something we rep over time and I am looking forward to doing more of it in camp.”

Smith has been serving as the Steelers’ special teams coach since 2013. A Pittsburgh native, he grew up in the city and played his college ball at Edinboro, a school located just below Erie. His coaching career began at Edinboro and then again at Central Catholic in the late 70s. He broke into the NFL in 1995 with the Eagles and spent nearly a decade in Washington before coming over to Pittsburgh.

Though he’s one of the oldest coaches on the Steelers’ staff, he’s one of the loudest and most energetic and has repeatedly shot down any idea of retirement plans. As we researched, Pittsburgh and Smith are the only team in the league to employ only one official special teams coach, though he gets help from assistants like Blaine Stewart.

Heyward’s versatility is what helped get him drafted by the Steelers in the sixth round. Offensively, he has the ability to play all over the formation as an H-Back, fullback, slot receiver, and based on how the team has talked about him, as an in-line tight end. But Heyward isn’t going to be playing 500 offensive snaps his rookie year. The bulk of his playing time will need to come on special teams and he’ll have to show the same versatility, playing on multiple units. That could mean being a wing or guard on the punt coverage team, an up-man on the kick return unit, L3 on kick coverage, and on the line on the punt block team. Fullback Derek Watt was signed and has earned his keep on special teams, playing far more snaps there (332) than on offense (86).

Speaking with Varley, Heyward said he understands his role and value of performing well as a specialist.

Pittsburgh has a slew of examples of players who got their start on special teams. Hines Ward cut his teeth there. So did James Harrison. Most people forget Brett Keisel ran down kicks early in his career while more recent examples like Robert Spillane and even Jamir Jones last year got onto the roster that way. Heyward is unlikely to ever become a full-time starter but has the profile of someone who could be a core special teamer which would offer the chance of a long and successful career.