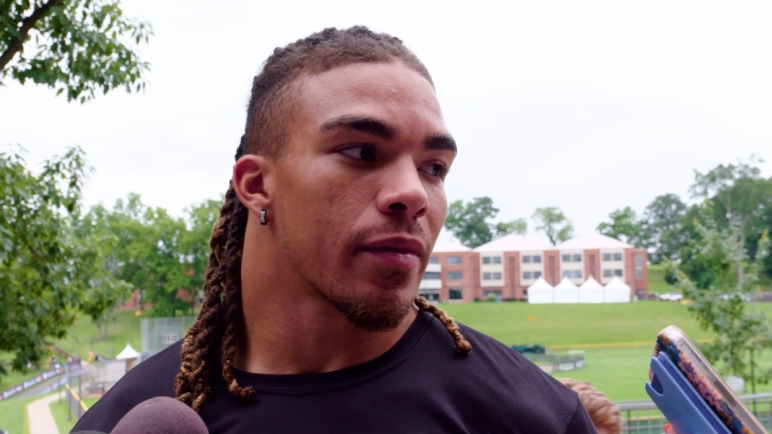 The more you can do with the ball in your hands, the more valuable you can be to an offense.

San Francisco WR Deebo Samuel proved that last year in his breakout season, being utilized primarily as a WR to start the season but ended up seeing more usage in the backfield down the stretch for the 49ers. In 2021, Samuel had 77 receptions for 1,405 yards and six TDs along with 59 carries for 365 yards and eight rushing TDs in a hybrid role for the offense.

As Pittsburgh Steelers WR Chase Claypool enters his third season in the league much like Deebo did last season, he looks to rebound after a disappointing 2021 campaign. When asked by the local media prior to training camp practice Friday about his usage running the football after showing glimpses of that ability as a rookie, Claypool was noncommittal about seeing a similar role to Deebo forming for him in Pittsburgh.

“We’ll see,” Claypool responded to the question on a video at Steelers.com. “I know they tried to get me some last year and the year before that. I think they always try to get receivers the ball to stretch the field out a little bit. So, we’ll see what the plan is this year.”

Claypool didn’t sound convinced that he would be asked to take on a role similar to the one Deebo Samuel had last year for San Francisco, but that doesn’t mean that he isn’t capable of being handed the ball on jet sweeps and making plays as a runner. As a rookie in 2020, Claypool got ten carries for only 16 yards, but scored two TDs on the ground. Last season, Claypool was more effacement as a runner as he got 14 carries for 96 yards, but no scores. He is a physical presence at WR, standing 6’4″, 238 lbs., but also has the speed in the open field to get an angle and challenge defenses if he gets in space.

Still, while Claypool said that he wouldn’t mind being used in the wing back role for the offense, he probably wouldn’t be the best candidate for the job. Should Pittsburgh really be interested in a WR taking handoffs in the backfield as a complement to Najee Harris in the run game, the better choice would likely be Calvin Austin III who would bring blazing speed and burst to the backfield. Austin would complement Najee’s bruising running style and has shown in college that he is dangerous as a runner in space, having TD runs of 69 and 83 yards, respectively.