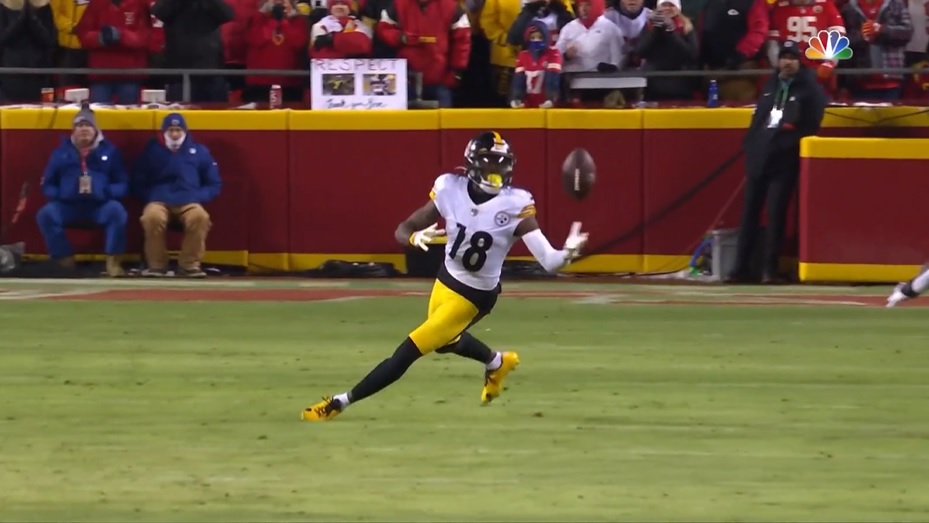 While listening to the latest edition of the CBS Fantasy Football Today Podcast with host Adam Aizer and analysts Dave Richard and Heath Cummings, the three began the show talking about their favorite stats from the 2021 NFL season and how those stats could correlate to 2022 for specific players. When Aizer introduced the news and notes section of the podcast and brought up the statement that Pittsburgh doesn’t intend to give Terry McLaurin money to Diontae Johnson, Richard made a comment about previous WR deals the Steelers have done, and how that may compare to how they go about doing business with Johnson this offseason.

“This is a team that does a good job of recognizing WR talent and rewarding it,” Richard said on the Fantasy Football Today Podcast. “I remember back when Mike Wallace and Antonio Brown were both on the Steelers. Wallace was the more popular Steeler in fantasy at the time and he got into a contract squabble with the Steelers and they said, ‘You know what? We’re just going to pay Antonio Brown.’ And they look like geniuses for doing it.

Alex Kozora and Dave Bryan have talked about this exact same topic earlier this offseason regarding the notion that Pittsburgh doesn’t attempt to re-sign their WRs. It was rumored that Pittsburgh attempted to re-sign WR Plaxico Burress, but he opted to sign with the Giants instead for hopefully a bigger role in the passing game. The same could be said for Wallace, but the two couldn’t come to terms on a deal. That’s when Pittsburgh opted to re-sign Brown to a more cost-effective deal which proved to be the right decision with Brown becoming the best receiver in the league for nearly half a decade.

“JuJu was a free agent two offseasons ago,” Richard continued. “They opted to not sign him to a long-term deal. They brought him back on a one-year deal and now he’s off to Kansas City.”

It was widely expected that JuJu Smith-Schuster was going to cash in as a free agent in 2020 despite a down 2019 campaign, leaving many to think he wouldn’t return to Pittsburgh. However, the market wasn’t there for him, and he opted to come back to the Steelers on a one-year pact to try and resurrect his value for the next offseason. Sadly, JuJu suffered a shoulder injury that cost him a large chunk of the 2021 season, leaving him again the odd-man-out on the booming WR free agent market. Instead of returning to Pittsburgh, he opted to take a one-year deal with the Chiefs to hopefully accomplish what he set out for in 2021 in the high-powered Kansas City offense with Patrick Mahomes.

According to Dave Richard, Pittsburgh may be looking at Diontae Johnson’s situation in a similar light as those two previous examples in the team’s history.

“So, Diontae’s got to play his cards right here in the fact that the Steelers aren’t bending over backwards to pay him tell me they like him, but that they don’t necessarily love him.”

Personally, I don’t see much wrong with that reasoning from Richard when it comes to Pittsburgh’s thought process on whether to extend Johnson. Sure, they have acknowledged him as a great talent at the WR position as well as a hard worker and good teammate. Still, if Pittsburgh was hell-bent on getting a deal done with Johnson, we likely would have heard some inclination that there has been at least some communication between the two sides. This is not meant to be a slight on Johnson as a player, but rather understanding that he isn’t on the same level of dominance that a guy like Antonio Brown was when he got his second big pay day from Pittsburgh.

As we have been projecting most of the offseason here at Steelers Depot, Pittsburgh likely has a line in terms of what they are willing to pay Diontae Johnson in terms of average yearly salary, total guarantees, etc. If Diontae’s asking price is higher than that line, they likely won’t proceed with any negotiations. Don’t get me wrong. He’s a talented player that deserves to get paid, but at what point is too much too much? We just saw Terry McLaurin get a three-year $70 million dollar extension with a record $28 million signing bonus, pushing his new money average to over $23 million per year. Diontae Johnson’s career accomplishments line up well with McLaurin’s making that likely his floor asking price at this point.

I think Johnson can continue to progress as a receiver in the league, but that’s a pretty price to pay for a wide receiver that is debatable top 10-15 at his position.

We will soon learn the Steelers’ intentions when it comes to getting a contract extension done with Johnson likely once training camp gets underway. If buzz starts to pick up those negotiations are taking place, we will know that they at least have some interest in attempting to get a deal done. If things remain quiet throughout camp and into the regular season, chances are that the team is going to have Johnson play out that last year of his rookie deal and either re-sign/franchise him after the season or let him walk altogether.

What are your thoughts on Diontae Johnson’s contract situation compared to Burress and Wallace/Brown in the past? Do you think Richard makes a point saying that Pittsburgh properly rewards WR talent with the way it goes about their contract extension attempts? Do you see Johnson and Pittsburgh striking a deal prior to start of the regular season? Please leave your thoughts in the comments section below and thanks again for reading!