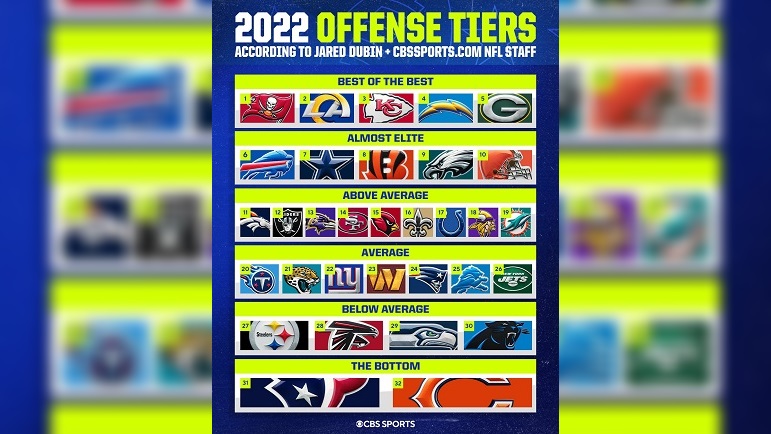 On a recent episode of the CBS Sports Fantasy Football Today Podcast, host Adam Aizer and fantasy football analysts Jamey Eisenberg and Dan Schneier started the show talking about the players they are “worried about being wrong about “in terms of their individual rankings and if they will be too low or too high on a player next season. Common names that are floated around fantasy football draft circles included RB Javonte Williams, WR Deebo Samuel, and even QB Aaron Rodgers as players that could perform extremely well next season as justify their average draft position, or they could underwhelm.

When Schneier brought WR Diontae Johnson of the Pittsburgh Steelers to the table as a player that he is worried about being wrong about, the topic had nothing to do with Johnson as a talent in the NFL. Rather, his argument was based around his thought process that the Steelers will yield one of the worst offenses in the league next season.

“I think that offense will be an epic disaster,” Schneier said regarding the Pittsburgh Steelers offense at the 40:30 mark of the podcast which also was shown on the company’s YouTube channel. “I saw Trubisky last year as a spot start for Buffalo which was not good. I know that Pickett’s going to have a tough time adjusting to the NFL in my opinion, at least. And then you factor in how difficult that schedule is and how rough that division is and the cold weather. Everything just screams one of the worst offenses in the NFL.”

Defense held the Chiefs' offense in check for 15 minutes. Awfully hard to do for even 30. Beating the Chiefs' means matching their big plays (like the Bengals did). Steelers' offense has no ability to do that. #Steelers

Schneier didn’t stop there with his harsh criticism of the Pittsburgh Steelers offense. When asked by host Adam Aizer which team has the worst offense in the entire league, Schneier didn’t hesitate to give his input on the matter, answering the question first.

“I’m going to go with the Steelers,” Schneier answered when asked by Aizer who he sees is the worst offense in the NFL. “Part of my anti-Steelers offense is the schedule is insanely tough and they play in an incredibly tough division from a defense-standpoint.”

Seeing the Steelers offense as a bottom ten unit in the league can be argued. Seeing them as the worst offense in the entire NFL is a brash hot take.

Honestly, when I heard this take in real-time by Schneier, I couldn’t believe what I just heard. Sure, Pittsburgh struggled running the ball consistently and effectively last season, but they still finished 29th in the league in rushing while finishing 15th in the league in passing yards, accumulating 5,361 total yards of offense in 2021, good for 23rd in the NFL according to Pro Football Reference. Schneier pointed to the lack of addressing the offensive line as a major issue, which can easily be combated by the fact that Pittsburgh signed two starters this offseason in G James Daniels and C Mason Cole. Daniels should be a big upgrade at guard and Cole should at minimum stabilize the C position compared to Kendrick Green.

While Schneier may be correct that Pickett and Trubisky don’t have the experience that Roethlisberger had under center, both passers bring elements to the position that Ben lacked last season. Both passers bring an aspect of mobility and extending the play that Roethlisberger hasn’t had in years, plus have better arm strength to stretch the field vertically and create explosive plays in the passing game that Ben just couldn’t do last season compared to his prime years in the league. Pittsburgh should also be able to run a passing game where the ball isn’t coming out in two seconds in 2022 for fear of Ben getting hit in the pocket, resulting in more of the field being unlocked for the offense.

Contrary to Schneier’s comments, Trubisky didn’t start a game for Buffalo last season, seeing just 33 offensive snaps on the year. Sure, he threw an INT in that limited sample size, but he also completed 75% of his pass attempts in that very narrow sample size, making it difficult to gauge his ability as a passer either way coming cold off the bench in a blowout loss against the Colts. Realistically, Trubisky will be playing with the best set of weaponry at his disposal next season compared to his time in Chicago along with a comparable offensive line, seeing that Pittsburgh signed his former guard Daniels to the roster the offseason. Trubisky isn’t likely the answer at QB, but he should be an adequate spot starter.

In terms of Pickett struggling to adjust to the NFL game, I don’t think Schneier has been around this offseason with Pickett being touted as the most “pro-ready” prospect in this draft class. He may be a rookie and will likely be behind Trubisky when the season opens but seeing as he has five years of experience starting in college in an offensive system and had Mark Whipple as his QB coach at Pitt, the same coached that taught Roethlisberger his rookie season. He has made comments that while the offense was different when he got to offseason activities, he has managed to learn the offense in his short time with the Steelers.

The AFC North is no slouch of a division to be sure, but with a Deshaun Watson suspension looming and the Ravens experiencing a turnover on their roster with FAs and multiple players battling back from injury, it’s hard to suggest that Pittsburgh is clearly the worst team in the division and doesn’t have a chance to compete for the title crown or at least a Wildcard spot.

I don’t expect Pittsburgh to have a top ten offense in 2022, but I also highly doubt that they will be the worst offense in the league like Schneier suggests in the podcast. Obviously, the offense will have to go out there and execute with whoever ends up under center, but I have some optimism that this unit should at least match, if not exceed what last year’s unit accomplished in 2021.

What are your thoughts on Schneier’s comments regarding the Pittsburgh Steelers offense in 2022? Do you think that they will be a unit closer to the worst in the league, or that they will be closer to a top-12 unit? What issues do you see in his argument, or are there some aspects that you support? Who do you think has the worst offense in the NFL? Please leave your thoughts in the comments section below and thanks again for reading!