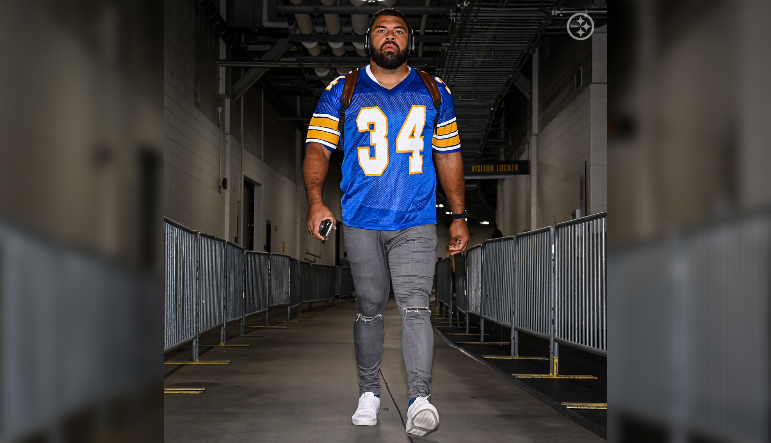 Losing your father to brain cancer just months before heading off to college can be tough on anyone. Being the son of former NFL and College Football great Craig “Ironhead” Heyward made it even harder for current Pittsburgh Steelers’ star defensive tackle Cameron Heyward.

Though their time together was much shorter than they could have ever imagined, the legacy and the way of life that “Ironhead” left behind is one that Cam Heyward has picked up and carried forward, carving out his own path as a legendary player in his own right, one that is on pace for a Hall of Fame induction when his playing days are over.

Off the field, Heyward’s impact is much greater than his play on the field, which is saying a lot. From his contributions to various charities in the city of Pittsburgh and beyond, and the founding of his foundation, Heyward has made a tremendous impact on his communities off the field. Heyward established the Heyward House Foundation in 2015 to benefit many causes, including Southeastern Brain Tumor Foundation, Boys & Girls Club of Western Pa., DKMS, KidsVoice, Smyrna Stars Basketball Club, and after-school fitness programs. You can learn more about his foundation at his website, thecameronheywardfoundation.org.

Other charities Heyward has supported include the Homewood Children’s Village, the Greater Pittsburgh Community Food Bank, Blessings in a Backpack and Urban Pathways.

Steelers DT Cam Heyward has always been a leader on and off of the field for the team. #Steelers #NFL pic.twitter.com/UkVSO91gCZ

Still, to this day, he’s aiming to walk in the path of his late father’s footsteps. Appearing in an interview on #ThePlaybook with David Metzler, the cofounder of Sports 1 Marketing, Heyward discussed the legacy his father left behind, and how he’s aiming to continue to follow in his path of leaving things better than he found them during his time.

“I don’t know how much [it is] genetic, but I’ve just always just tried to follow the path my dad set with his legacy, with his just personality in general,” Heyward said to Metzler, according to video via the official David Metzler YouTube channel. “He was very infectious, knew how to brighten someone’s day, and went above and beyond to do it. That’s something I always strive to do.

“It’s something I have to continue to improve [on], but you know, we have a great opportunity and a great platform to do it. There are so many people that need our help. So many people can be role models, and I think us as football players can do that.”

Heyward personifies everything that a professional athlete should be — on and off the field.

On the field, he’s a ruthless competitor, one that will do whatever it takes to win football games and will his team to greater heights. That’s why he’s been a team captain for so long.

Off the field, Heyward never hesitates to give back, helping those in need — old and young. He leads by example and is a great role model for the younger generation on how to conduct and carry oneself. That’s led to four Walter Payton Man of the Year nominations as a member of the Steelers.

.@CamHeyward is our nominee for the Walter Payton NFL Man of the Year, presented by @Nationwide.

RETWEET & reply with “#WPMOYChallenge Heyward” to help him earn a $25,000 contribution to the charity of his choice. #WPMOY

Throughout the Steelers’ illustrious history, they’ve had quite a few players like that. Heyward might take the cake, though. Aiming to follow in his father’s footsteps and uphold the Heyward legacy, Cam has incidentally carved his own path, one for the better. His dad would be so proud of him.

I know that all of Pittsburgh sure is.