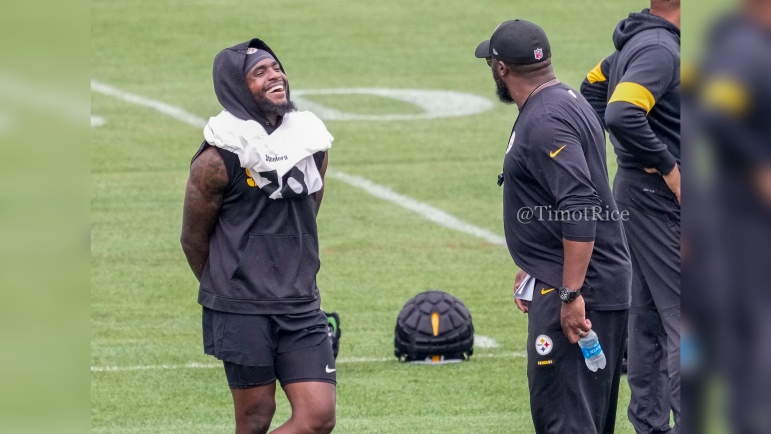 Prior to taking the practice field Thursday afternoon at Saint Vincent College in Latrobe, Pittsburgh Steelers DL Cam Heyward spent some time to talk to the local media regarding his thoughts on Ben Roethlisberger’s comments that have been shared back-and-forth the past couple, holding his teammates accountable, and the natural progression of Najee Harris as a leader of the football team.

Heyward was asked about T.J. Watt’s “hold-in” last year during training camp as the two sides worked to reach a contract extension, and how that situation is similar to Diontae Johnson’s situation this season as he sat out of individual and team portions of practice as he looks to get a new deal done prior to the start of the regular season.

“I see exactly where he’s coming from,” Heyward said via video provided by Steelers Live on their Twitter page. “Like, T.J. went through a situation. I remember even before I got here, guys talking about when Hines was holding out and then they finally got Hines here and that was a big thing. Everybody’s got their own situation and how they handle is different. If it’s not disrupting the team, it’s not disrupting us.”

Heyward has been around the block when it comes to contract negotiations in Pittsburgh. We saw Watt and the Steelers take negotiations up to the eleventh hour last year before getting a deal done, making Watt the highest-paid defensive player in NFL history at the time on average annual value. Heyward also mentions the contract dispute Hines Ward had with Pittsburgh back in 2005, the same year the Steelers would go on to win the Super Bowl. While Ward and the Steelers got things worked out regarding his contract, Ward attests to this day that holding out will be something he will always regret.

Heyward also makes a good point that if Diontae Johnson isn’t disrupting the team with his hold in, it won’t be that big of an issue for the team. He, as well as all of Diontae’s teammates, want to see him get the bag and be rewarded for his performance thus far on the football field.

Diontae Johnson also has reported to training camp and is actively engaged with his teammates, much like Watt and Minkah Fitzpatrick were when they went through their respective contract situations. Johnson could have taken the Le’Veon Bell approach and not show up at all to training camp, making a big scene of the situation. Instead, Johnson has shown that he wants to be a part of the team and the issue of his financial future wouldn’t keep him away from the team to start training camp.

When it comes to the issue of Johnson missing an opportunity on the football field with lost reps in practice, Heyward pointed to the “next man up” mentality, suggesting that the young guys in the WR room will benefit from the extra opportunities allotted to them while Johnson remains on the sidelines.

“Like Mike T always says, ‘One man’s misfortune is another man’s fortune’.” Heyward continued. “This gives a chance for other guys to step up. A guy like George Pickens to get some reps, Calvin Austin, Chase Claypool will get more reps. And they shouldn’t run from it. Diontae will be ready by Week 1, but I don’t think he’s going to harm the team in any way.”